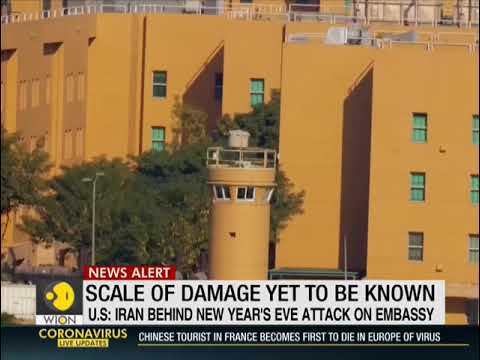 Reuters reports an American military officer as saying that a base at which US troops are stationed in Baghdad also was attacked.

There are no reports of any casualties from these attacks.

The attacks came hours after the Harakat Hezbollah al-Nujaba (the Movement of the Nobles of the Party of God), led by Akram al-Kaabi, had announced a “countdown” to the expulsion of US troops from Iraq. I reported that in early January, “The movement’s official spokesman, Nasr Al-Shammari, warned American soldiers in Iraq, saying: “Do not close your eyes, for the revenge of the martyr Abu Mahdi al-Muhandis is inevitably coming at the hands of the Iraqis, until the last American soldier is expelled.” In February of 2019, the US had designated the al-Nujaba’ a terrorist organization. On Sunday January 5, the Iraqi prime minister Adil Abdulmahdi asked parliament to vote to expel US troops from Iraq, and the country’s legislature did so vote by a majority. This vote was not, as US officials keep saying, ‘advisory.'”

The Popular Mobilization Forces, which have been recognized by parliament as a sort of National Guard, have said that they will give the new prime minister, Mohammad Allawi, the opportunity to negotiate a withdrawal from Iraq by US troops. They have warned, however, that if he fails to do so, they will take matters into their own hands. There are roughly 5200 US military personnel in Iraq, mostly military trainers and some special operations forces helping the Iraqi Army mop up remnants of the ISIL terrorist organization.

The Popular Mobilization Forces or militias, which are heavily Shiite, were angered by Trump’s January 3 drone strike on Baghdad International Airport, which killed a senior PMF commander, Abu Mahdi al-Muhandis, along with Iranian general Qasem Soleimani.

Agence France Presse Arabic also reports that the Trump administration is playing economic hardball with Iraq in order to impose Washington’s will on the country. Trump allegedly delayed the transferral to Iraq from the Federal Reserve of Iraqi monies for two weeks in January, and Trump has threatened to take Iraq’s funds held at that location hostage if Iraq defies him. The US Treasury Department had also granted Iraq a six-month waiver for importing Iranian gas and electricity, but recently shortened the waiver to 45 days.

Trump has threatened to destroy the Iraqi economy with severe sanctions if the Iraqi executive follows through on parliament’s decree that US troops must leave.