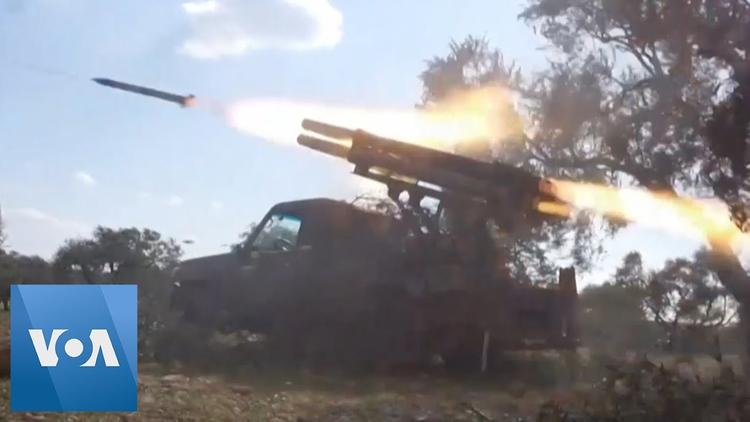 Amid international neglect of the tragedy of an additional one million displaced individuals from the “de-escalation” zones in the countryside of Idlib and Aleppo provinces, Moscow and Ankara announced that the talks that took place on Monday and Tuesday failed to reach any new understandings.

“We did not accept the map [of de-escalation zone borders] proposed by Russia,” said Turkish spokesman, Ibrahim Kalin, while Lavrov said that Russia did not propose new demands from Turkey regarding Idlib. As for Turkish President, Recep Tayyip Erdogan, he addressed his party’s members of parliament yesterday, threatening an operation to invade Idlib regions “at any moment”, similar to previous invasions in the Euphrates Shield area, Afrin and Spring of Peace. This is to confront regime forces if Turkish observation points are targeted, a number of which are surrounded by Al-Bashar’s forces.

Yesterday, there was a telephone conversation between Erdogan and US President Donald Trump, the latter stated they had discussed matters regarding Idlib, adding that they are working together.

This American statement, at the highest level, indicates American support for Turkey regarding the conflict in and around Idlib, but it is nothing more than a statement. American Special Envoy to Syria, James Jeffrey, had already announced this support in Ankara. However, the National Security Advisor, Robert O’Brien, said on the same day that the US would not send troops into the Idlib conflict zone. While O’Brien’s words are not surprising, as no one expected otherwise, it seemed to be a response to the statement made by Jeffrey and a warning to Ankara not to cling to illusions about the extent of Washington’s involvement in Syria in support of Turkey, after having withdrawn most of its forces from Upper Mesopotamia.

Journalist Murad Tekin quoted unidentified American sources’ answer to his question regarding the contradicting American statements, and the sources assured him that there is no contradiction between the statements by Jeffrey and O’Brien. They said that while the US will not send troops, it would provide Turkey with various forms of intelligence assistance and military equipment. The sources went as far as to say that Washington would not object to Turkey obtaining Patriot Air Defence missiles to be installed on the border state of Hatay, not from the Pentagon but from European countries that are members of NATO.

Regardless of the extent to which Washington can go in support of the Turkish war effort in the Idlib and Aleppo regions, it is clear that the Turkish president is playing, in this conflict, the game of blackmailing Russia with the Americans and the Americans with Russia. Washington, which has found the opportunity to restore its lukewarm relationship with its Turkish ally and keep it away from Russia, is sending those positive signals to encourage it to continue confronting Russia on Syrian soil, perhaps in the hope that an error in the calculations will lead to an accident that ruins the Russian-Turkish partnership, similar to the accidental shooting down of a Sukhoi plane in the fall of 2015. This began the Turkish concessions to Russia, reaching a partnership in the Astana path.

In terms of blackmailing Russia, Turkey is acting with great caution on the ground, refraining from targeting Russian planes, in exchange for factions acting on Turkish orders shooting down two regime helicopters last week.

The Russian president also knows that the new warmth between Ankara and Washington over the conflict in Idlib is of limited effect and is nothing more than blackmailing him to achieve the conditions demanded by the Turkish partner.

Meanwhile, the regime and its supporters celebrated the recovery of towns and villages in the northern and western countryside of Aleppo, which for years had been under the control of armed opposition factions. Apart from the bitterness that drives the Syrian opposition to frequently talk about under the table deals between the Russians and Turks regarding handing over those areas without a fight, we can say that the Turkish blackmail of Russia does not exceed limited areas in the north of Idlib that Turkey wants to retain control of it for as long as possible in order not to have to, later on, demand that Russia withdraw from Afrin.

What Erdogan is doing is pushing the lines of the upcoming diplomatic battle forward (to Idlib) instead of fighting it in Afrin and perhaps the “Euphrates Shield” region. This is why he was desperate for the Idlib battle today. As for the northern and western countryside of Aleppo, it is clear that Turkey is under no illusions about keeping it, which prompted the factions to withdraw without a fight from a number of towns and villages.

As for the Americans, their goal in declaring their support for Ankara, in addition to trying to create a rift between Russia and Turkey, is to preserve effective political tools that will influence the formulation of Syria’s political destiny when the multilateral table is assembled for that.

Turkish expert on international relations, Ilhan Ozgul, presented an idea worthy of consideration, regarding the battle over Idlib. He said that Turkey, which until now has fought its struggle on Syrian soil through proxies in so-called proxy wars, is now threatened with turning itself into an agent of an international power greater than it (the US) to fight a proxy war on behalf of Washington in Syria!

We will see, in the coming days, whether or not this analysis is appropriate. It assumes that the United States has a clear political strategy in Syria, in which Turkey is one of the tools for its implementation.