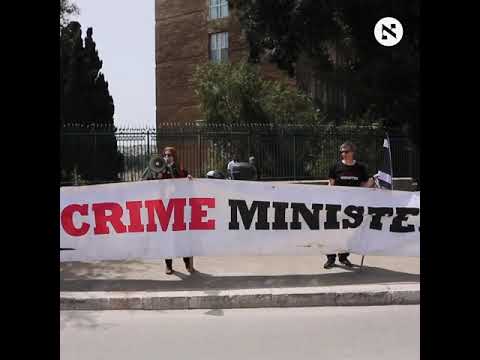 Oakland, Ca. (Special to Informed Comment) – The United States and Israel may be considered “liberal democracies,” though the US is technically a “republic;” and Israel’s brand of democracy is qualified by its selective application of human rights. Both Israeli PM Benjamin Netanyahu and President Donald Trump have ravaged traditional norms of government and social boundaries in their respective countries, with shameless mendacity and fear-mongering.

Now both men are using the Coronavirus (Covid-19) to solidify their hold on power. Both are positioning themselves as “wartime” leaders, whose nations will suffer if they are ousted. And both exude a very unhealthy sense of opportunism to monetize and benefit politically from this crisis. Considering their mutual investments in each other’s political fortunes, this is not surprising.

Bibi is trying to prolong his reign as an “unelected prime minister,” by closing the courts, the Knesset and other governmental functions. That means his trial on bribery, fraud and breach of trust can’t move forward, and he remains as PM indefinitely. As Chemi Shalev noted in Haaretz, “For over a year, Netanyahu has suborned Israeli democracy, the rule of law and the overall interests of the state in his personal quest to escape the long arm of the law.” Now, he is using the Coronavirus to blackmail his political rivals and Israel into accepting his leadership in a National Unity Government. As George W. Bush did in the aftermath of 911, Bibi is depicting any resistance as an act of national betrayal with full-frontal defamation. The so-called “compromise” with Benny Gantz’s Kahol Lavan Party would give Bibi another 18 months [rf1] as PM, while they get portfolios of other ministries. Gantz dismissed Bibi’s “compromise” saying, “There is an expectation that I should come under Netanyahu, as if that is the only alternative. I ran wars. I know how to run national crises no less than him.”

In a shocking authoritarian move, Bibi has postponed his own trial by closing the Israeli Courts. He has undermined the PM selection process by preventing the newly elected Knesset from nominating a new Speaker, thereby assuring his standing. In response to the Coronavirus, he has employed the Shin Bet security agency to deploy widespread surveillance on Jewish Israeli citizens, in a manner usually reserved for known Arab terrorists, with no parliamentary oversight.

Trump is using the crisis to stonewall congressional investigations, while weakening immigration rights and labor unions, three of his longstanding policy goals. He sealed the US-Mexico border supposedly to contain the pandemic, but Mexico has 118 confirmed cases, while the US has over 13,000. The Trump Justice Department requested that Congress allow judges to detain people indefinitely without trial, and suspend constitutional rights during the pandemic. The Democratic House would never pass this brazen attempt to destroy the U.S. Constitution, but Trump is trying. Just as Bush Jr. used the drama and panic of 911 to restrict civil liberties, Trump is doing same without a hint of nuance. He wants to suspend Habeas Corpus, which hasn’t been done since the Civil War. While some jurisdictions are releasing low-level, non-violent prisoners to reduce exposure and spread of the virus, Trump is trying to lock more people up indefinitely. So this is not about saving lives, but consolidating power.

Both men have used this crisis to silence opposition and solidify their hold on power, while neither have been “duly elected.” Trump’s electoral victory in 2016 came with the notorious assistance of Russian “Soviet-style” interference, abetted by voter suppression and gerrymandering, though Secretary Clinton’s tone-deaf, lackluster, and arguably corrupt campaign also fed into Trump’s agenda. And he lost the popular vote by over 3 million. Bibi is trying to wrangle another term as PM after failing to win a majority in three elections over 11 months. His ultimate motive is to position himself to replace President Reuven Rivlinin 2021, which would guarantee him immunity for another seven years! His additional 18 months as PM would allow him to serve until that time.

But Gantz is not taking this lightly, having moved aggressively to seize control of the Knesset with the slim majority he holds. Already, he has introduced legislation at the committee level to prevent a criminal defendant from running for or serving as PM, while Supreme Court ordered the Knesset to elect a new speaker before any unity government can be formed. They also instructed that Gantz must get the first turn as PM, not Bibi. Yuli Edelstein, Knesset Speaker will hold a vote this week in accordance with the Supreme Court decision. He has been the only Likud MK to show civility toward Gantz, by agreeing to allow him to form four new committees, over the objections of all other Likud MK’s.

Haaretz columnist Yossi Verter noted, “Under the cover of the danger, the fear and the anxiety, the person who lost the brakes long ago is plotting to eliminate the last vestiges of Israel’s democratic structure.” Netanyahu is an animal fighting for survival, and the vestiges of democracy in Israel are in his way. In the U.S. that pesky old Constitution keeps getting in Trump’s way. American civil liberties and that old thing are being tested as never before. Like all nations, the US and Israel are fighting a major public health crisis. They are also facing parallel challenges to their very democratic structure and function, from their own leaders who are using this event as an excuse to introduce authoritarianism into their democracies, and ensure their long-term rule.