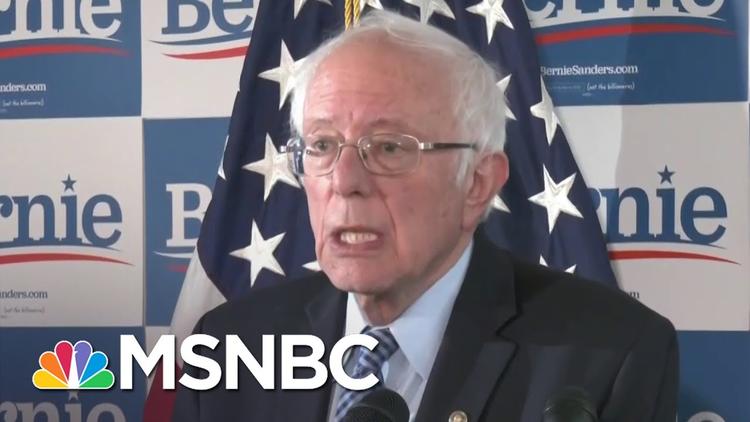 Love him or hate him, Bernie Sanders … has inspired a massive, energetic, hardworking and fiercely loyal following, determined to carry him to victory at the Democratic National Convention in July.

To the great agitation of his rivals and critics, Sanders has demonstrated a stunning popularity among a diverse cross-section of voters, including women, Latinos, Blacks, Muslims, union members and especially young people.

The oft-repeated trope of the white “Bernie bro” has proven to be more myth than reality. Sanders’ rapid and dramatic rise to front-runner status has sent his critics in the Democratic Party into a full-blown panic, revealing their inability to understand the current historical moment and the rhetorical power of the Sanders campaign.

How, they wonder, has Sanders risen to the top of the field? What exactly is his appeal?

Why are young people, including young women of colour, going for the old white guy?

Perhaps most importantly, why are so many Democratic voters warming to socialism, long regarded as antithetical to the American way of life?

As he did in 2016, Sanders has exposed a deep rift in the Democratic Party between its centrist and progressive wings.

This rift is not so much an intra-family dispute as a longstanding rivalry between two distinct political traditions. The first of these traditions is the so-called Third Way, first described by British sociologist Anthony Giddens in the early 1990s.

It pursues incremental change while vigorously upholding a capitalist order. Bill Clinton was the first American president to put Third Way politics into practice. The Third Way has since become the reigning orthodoxy of the Democratic Party. Even Barack Obama, who campaigned on the lofty rhetoric of “hope and change,” governed as a resolute and unapologetic centrist, much to the disappointment of his progressive base.

With the exception of Sanders and Elizabeth Warren, the rest of the Democratic field falls squarely within the tradition of the Third Way.

While the Third Way proved to be a politically salient politics during the 1990s, it has since calcified into rigid and obstinate dogma. The longstanding habit of ignoring the poor, siding with the rich and powerful and pursuing only incremental change has run up against a brick wall of brute reality: Gilded Age-levels of income inequality, skyrocketing medical debt, US$1.5 trillion in student loan debt, a racist criminal justice system and impending ecological collapse.

Set against this stark empirical reality, incrementalism appears to far too many voters to be a massive failure. And the apologetic habit of dressing it up in the robes of pragmatic necessity has become a kind of secular theology: it demands faith in a better future that it can never deliver, a future lacking precise detail because it lacks a definable goal.

In the logic of the Third Way, incremental change becomes an end in itself: change for its own sake.

The problem with this delicate high-wire act — preaching incremental change in the face of exponentially worsening social and environmental crises — is that it has become impossible to pull off convincingly. Talk of incremental change doesn’t sound very promising or encouraging when the planet is on fire and climate scientists have given us a very short window to act.

By contrast, Sanders has been a lifelong advocate of democratic socialism, a tradition whose core principle is that democracy should be expanded from politics into the workplace — the sphere of life in which we spend the bulk of our waking lives.

Democratic socialism goes beyond mere social democracy — beyond programs like universal health care and public pensions — by calling for a fundamental change in the relationship between executives and workers.

It holds that workers should also have decision-making power, including over how revenue is distributed and how they get paid.

Democratic socialists want the workplace to be structured democratically, not like little North Koreas, in which CEOs rule like tyrants. Socialists see capitalist exploitation of people and the planet as the root of injustice. Hence, they advocate not incremental, but deep, structural change.

The reason Sanders has been so politically appealing to a diverse coalition of voters is because he offers a powerful explanatory key for making sense of America’s crisis moment.

He indicts not just specific people, like Donald Trump, Michael Bloomberg and Jeff Bezos, but the system: The political economic structure in which the super-rich have amassed extraordinary sums of wealth at the expense of everyone else, and our shared planet.

This enables voters to see injustice in big-picture terms. Sanders has equipped his base with a revolutionary political vocabulary for expressing their sense of injustice, as well as a language of shared struggle against a structure that thrives on exploitation. Solidarity, it turns out, is incredibly empowering.

Rise of a new politics

Third Way Democrats have scrambled to understand the Sanders revolution.

They’ve dismissed him as an old man yelling at the clouds and a snake-oil salesman offering the false promise of “free stuff.” Worse, they have been forced to perform the awkward dance of claiming the mantle of progressivism while disavowing popular progressive proposals and “revolution politics.”

This has inspired rhetorical gimmicks like cowboy talk and meaningless platitudes, that have been mercilessly satirized online. The desperate turn to disavowal and gimmickry strongly suggests the collapse of the Third Way and the rise of a new politics for the Democratic Party.

Democratic socialism might just be about to have its moment in America.

Jason Hannan is the author of Ethics Under Capital: MacIntyre, Communication, and the Culture Wars (Bloomsbury, 2020). Read the prologue here.