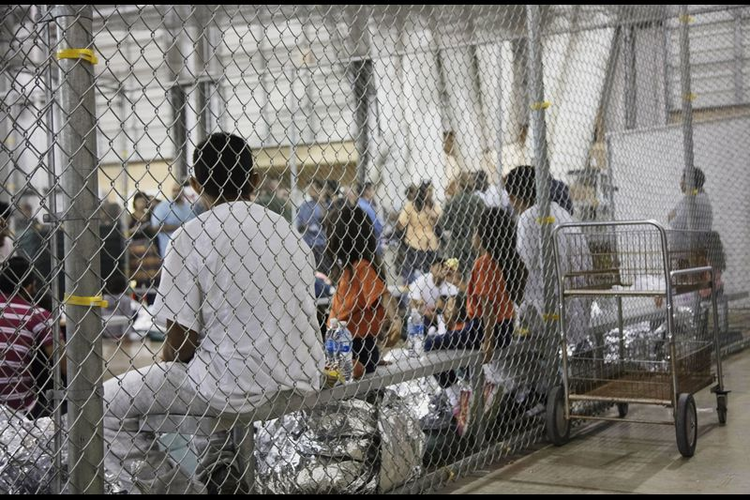 Chicago (Special to Informed Comment) – Like the dystopian nightmare imagined in the 2006 science fiction masterpiece Children of Men, Trump’s xenophobic efforts to terminate immigration result in death, suffering, humiliation, and destroyed lives. Under Trump, the speed of America’s plunge into casual barbarism is breathtaking. Along with the illusory border wall, the immigration clampdown involves an expansion of the Muslim travel ban, systemic brutality and dehumanizing treatment in detention centers, draconian cuts in refugee admissions,multiple new restrictions on asylum seekers, subversion of legal immigration through confusing policy changes, and the ramping up of deportations that includes denaturalizing citizens.

The dystopia depicted in Alphonso Cuarón’s visionary film, set in 2027, presents a realistic and disturbing portrayal of a white nationalist, apocalyptic future that has now arrived: xenophobic rhetoric and fear-mongering propaganda that denigrates immigrants and fuels hatred of foreigners, a world-wide pandemic, environmental catastrophes, multiple wars, state terror, and ethnic tribalism. In Children of Men, this collapsing world pushes desperate refugees to try entering Great Britain, a racist police state that is the only surviving society. The savage government hunts down these immigrants and cages them like animals in order to deport them back to the hell they came from. Mirroring our present, Children of Men feels torn from today’s headlines. The film was based on P. D. James’ prophetic 1992 novel with the same title.

Dan Dinello is author of 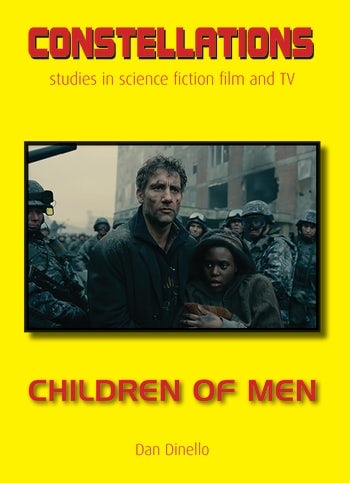 Anticipating Trump’s ban, Children of Men opens with Britain shutting down its borders. Trump launched his malignant presidency by closing American borders to Muslim immigrants. Initially declared unconstitutional, the third version of the racist Muslim ban was upheld by the Supreme Court, barring entry for almost everybody from several Muslim-majority countries including Yemen, Iran, Libya, Chad, Somalia, and Syria. In January 2020, the administration expanded the ban to target mostly African countries —including Sudan, Nigeria, Tanzania, and Eritrea as well as Myanmar and Kyrgyzstan — all part of Trump’s attacks on people of colorand his ongoing efforts to make America white again.

The caging of immigrants in Children of Men seemed like a fictional exaggeration. But, the U.S. border policy of putting kids in cages is no longer a fictional exaggeration but a disgustingly real and deliberately established plan, engineered by Trump’s vile immigration advisor Stephen Miller. In order to reduce border crossings, Miller pushed the idea of “consequences” — separating children from parents. Exposing the policy as state-sanctioned kidnapping and child abuse, a Homeland Security official said: “Miller made clear to us that, if you start to treat children badly enough, you’ll be able to convince other parents to stop trying to come with theirs.” The policy is so unAmerican and morally egregious that its brutality has even been expressed in a pop song “Babies in Cages” by the Southern rock band Drive-By Truckers. 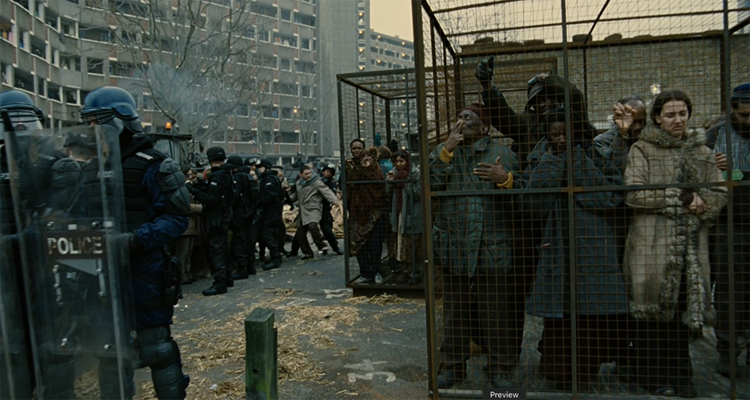 A kingdom of cruelty, detention centers have been built in 17 states to house detained children and adults. These Trump internment “hotels” force children to endure harassment by guards while living in squalid, over-crowded conditions. A dystopia unfolding in real time, 12,000 children are held in government facilities right now, according to official figures. A human rights disaster, this catalog of abuses belongs in the International Criminal Court in the Hague.

To stress his war on illegal immigration, Trump highlights the construction of a useless border wall for which he’s diverted money — under the pretext of a national emergency — from other congressionally authorized funds. But policy changes, not physical barriers, have helped seal the United States. Using executive powers to rewrite immigration policy with little or no pushback from Congress, the Trump administration has tightened asylum rules as well as cut the number of refugees that could be admitted to the U.S., thus undermining this vital humanitarian program. The right to asylum has been a cornerstone of international immigration law since the 1951 United Nations Convention Relating to the Status of Refugees. The United States, along with 144 other nations, made a commitment to protect those who arrive at our borders with “a well-founded fear of being persecuted for reasons of race, religion, nationality, membership of a particular social group or political opinion.” People who have languished for years in displaced persons camps face a drastically reduced refugee cap of 18,000 this year, down from the 110,000 that President Barack Obama set in 2016.

A June 17, 2018 photo provided by US Customs and Border Protection shows a caged facility in McAllen, Texas.

Beyond this, those fleeing violence or persecution have been forced into ramshackle camps in Mexico whose crowded, chaotic conditions resemble the Bexhill internment camp portrayed in Children of Men. As in Bexhill, the rule of law is displaced by a state of exclusion where people are subject to extra-judicial police violence as well as exploitation by drug cartels and smugglers. The Trump administration executed its “Remain in Mexico” policy early in 2019, forcing asylum-seeking Central Americans to stay in Mexico — for an indefinite amount of time — while their claims are processed, trapping thousands for months or years. These shunned people of no nation must live in vast tent encampments exposed to the elements without adequate food or water.

Since the new restrictions were rolled out, more than 59,000 asylum seekers have been turned back by American authorities. Using Orwellian terminology out of 1984, the government calls the “Remain in Mexico” policy “migrant protection protocols” though the lawyers who challenged it in court argued that it banished vulnerable people to perilous conditions. One week ago Friday, February 28 — over a year since it was implemented, a Federal Court upended the policy. Themigrants face “targeted discrimination, physical violence, sexual assault, overwhelmed and corrupt law enforcement, lack of food and shelter, and practical obstacles in court proceedings,” said Judge William A. Fletcher. “It’s really putting them at great risk.”

Asylum-seeking migrants believed that the wait was over and they could cross into the United States. Some, carrying all their property, moved to the border expecting to be let through. Then late in the same day, the court voted unanimously to suspend its own order. No one was let through. The Justice department claimed that overturning the policy will result in “massive and irreparable harms — to border security, public safety, public health and diplomatic relations.” Backing down, the judges ordered more arguments from both sides. With its insanely confusing and self-contradictory edicts, the government created another chaotic day of emotional turmoil for migrants on the Mexican border. The final decision will be determined by the Trump-tilted Supreme Court.

With the process of sealing the border quickly moving forward, Trump and Miller turned their attention inward, ramping up immigration raids. The forced deportation of immigrants is a central feature of Children of Men: captured foreigners are caged on the streets and then bused to Bexhill detention camp to await deportation. In the U.S., the Department of Homeland Security (DHS) has begun sending armed agents from Border Patrol SWAT teams to New York, Chicago, and other so-called sanctuary cities, where local law enforcement has limited its cooperation with Immigration and Customs Enforcement (ICE). A DHS official was present at a meeting where Miller advocated allowing immigration officers to pull children out of school.

Beyond increased militarization, the government has tweaked the system to create Kafkaesque bureaucratic booby traps: changed government forms intentionally designed to ensnare the unsuspecting. For example, U.S. Citizenship and Immigration Services (USCIS) now encourages officers to deny outright any visa or green card application that is missing evidence or contains an error — without giving applicants a chance to fix it. A migrant who takes an errant step in filing out forms, in compliance with previous rules, will suddenly find deportation agents knocking at the door.

Using immigration courts to increase deportations, the Trump administration has reopened thousands of deportation cases that were previously closed due to their low priority, thus affecting hundreds of thousands of people with close ties to their communities. To speed up deportations, the Justice Department has established a case quota requirement for immigration judges, eroding the due process rights of immigrants by forcing judges to rush through cases. The administration has also restricted immigration judges’ ability to terminate deportation proceedings against immigrants except in very narrow circumstances. Raising alarms about a creeping surveillance state, the government is now using cell phone data and facial recognition technology to assist in deportations.

The Trump administration is even going after naturalized citizens.A new denaturalization task force has begun working to strip citizenship from naturalized American citizens. While there are few legal grounds for denaturalization, the administration has already referred 100 cases to the Justice Department for prosecution. The creation of the task force is causing tremors of insecurity among naturalized citizens and permanent residents. On the horizon is a termination of Temporary Protected Status (TPS), a program that protects 330,000 people who would otherwise be subjected to disease, violence and starvation in the aftermath of natural disasters as well as cancellation of the Deferred Action for Childhood Arrivals (DACA), leaving 700,000 young adults vulnerable to deportation.

Immigration arrests of long-term residents are drastically up, mercilessly separating families. Despite Trump’s stupidity and incompetence, xenophobic fanatics like Stephen Miller implement Trump’s steam-of-consciousness incoherence into jack-booted immigration policy. As in Children of Men, this racist policy carves up the world into what social critic Naomi Klein, in her book Shock Doctrine, describes as Green Zones of privilege and Red zones of restriction: “A cruel and ruthlessly divided future in which money and race buy survival” and where stark partitions exist “between the included and the excluded, the protected and the damned.” As part of its anti-immigrant stance, the USCIS removed language celebrating the United States as a “nation of immigrants” from its mission statement. Reinforcing this language change, the president dehumanized and demonized immigrants, likening them to “animals” and “vermin” while deriding people from “shit-hole countries.” If the coronavirus gets much worse in America, Trump is sure to blame the outbreak on immigrants just as he did during the 2014 Ebola epidemic.

Despite the bleakness of its xenophobic portrayal, Children of Men inspires with a story of hope and political resistance. But, in our fraught moment, public outrage has dissipated as immigration news coverage has declined and the federal courts — especially the Supreme Court — are upholding the Administration’s repressive policies. An extreme right-wing immigration policy now rules the land — a policy aimed at rolling back the pluralistic foundation of our nation while creating an atmosphere of nativism and fear that affects everybody. Reflecting the white nationalist agenda depicted in Children of Men and producing a dark stain on American history, Trump’s immigration crackdown reflects the dreadful creation of dystopian fiction. But, the lives he jeopardizes are real. Unimagined in Children of Men is the horror Trump would create in a second term.