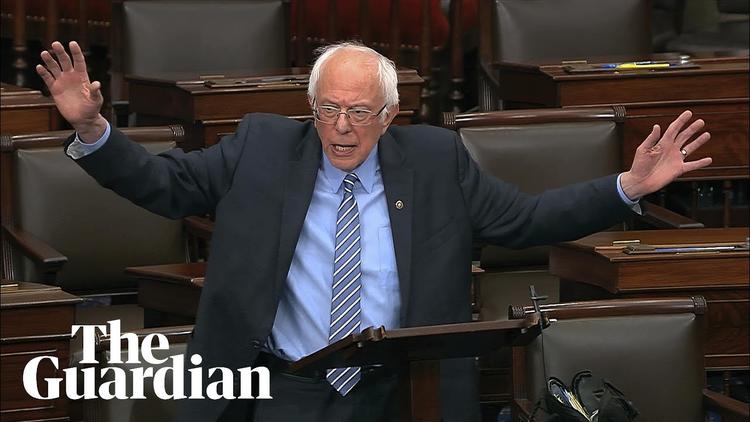 Ann Arbor (Informed Comment) – The character played by comedian Stephen Colbert, back when he was parodying Fox “News” anchors, lamented that “Reality has a well-known liberal bias.”

The fact is, the novel coronavirus has a well-known left-wing bias.

Given the hoaxes perpetrated on the American people by the Right wing for the past few decades, from the laughable Laffer curve (purporting to show that massive tax cuts on the super-wealthy pay for themeselves in increased GDP– bzzt, false), to the myth of the “welfare queen” (as though the poor are living it up), to “weapons of mass destruction” in Iraq, to the Fox “coronavirus is a hoax,” to the tens of thousands of lies told by Donald J. Trump — Colbert is entirely correct.

The bias of the coronavirus toward the Left is driving the Right wing up the wall, and provoking a new Cold War between the American States.

The Right wing media spent January and February and the first part of March pooh-poohing the novel coronavirus, calling it a hoax, predicting it was a flash in the pan. This is not because most of them are stupid, though a few seem to be galactically dense. It is because it seemed to be in the interest of the corporations that people not be alarmed into abandoning their habits as good little consumers. They peddled a fatal illusion, that if we did nothing, the menace would go away. Ironically, if the Republican-controlled US government had gone immediately to large scale testing in January like South Korea, our present dire straits would have been avoided. It is as though FDR had pretended for two months after Pearl Harbor that there had just been a minor misunderstanding in Hawaii but that the Japanese Empire posed no threat at all and could be safely ignored.

It is notable that while most states closed schools, it is mostly states with Democratic governors that have more effective shelter-in-place decrees. Republican-ruled states may issue cautions, but de facto they are letting people freely circulate, which is to say, they are letting the coronavirus grow exponentially. The Republican party is behaving this way on behalf of the rich and of business, because they believe that social distancing will harm their class interests and because they have made a calculation that your grandmother is expendable.

Americans did this experiment in 1918 during the Spanish Flu pandemic. Famously, St. Louis shut down with the onset of the virus, but Philadelphia insisted on holding its victory parade for WW I. The population of St. Louis experienced far fewer deaths per capita than did Philly.

A graph is worth showing again. Difference in mortality rates in 1918 Spanish Flu in Philadelphia, which went ahead with a public parade, versus St Louis, which cancelled all public gatherings.

I echo my many colleagues who have said “Let’s not be Philadelphia”. pic.twitter.com/I4SDuoOYCA

The Right wing in US politics is not half of the population, or even a third of the population. Its exponents represent the one percent, some 3 million Americans out of 331 million. In some ways they represent only the 0.1 percent. Charles Koch of Koch Industries, who is personally worth $38 billion, is one of the people the US Right supports. He lobbied to cut the budget of the Centers for Disease Control. They want less government regulation (so they can pollute the environment and inflict ailments on us without any restraint). They want government subsidies for planet-wrecking fossil fuels, because they own oil and gas fields and don’t want to forego the trillions of dollars in profits they could earn if only that pesky climate crisis remains unknown or not taken seriously for a few more decades. Hence they use their billions to spread around denialism.

The message of the Right wing is that government can’t do anything right, but that the magical markets and the private sector are close to infallible. How exactly they explain inefficient corporations like Enron or the 2008 Crash is not clear. Mainly, they don’t talk about them. I once went back and read some newspapers from the 1930s. Republican politicians were trying to peddle that crap about the free market being able to fix all the problems right in the middle of the Great Depression. Keynes proved that the only way to get out of a Depression is for the government to spend money, even money it does not have. Once the Depression ended, the Right went to work attempting to rewrite it as a failure of government and to undermine Keynesianism. It isn’t a complex issue. The billionaires don’t like paying taxes, and certainly not to support what they view as the little people. Franklin Delano Roosevelt’s New Deal created programs like social security and Medicare that give the impression to people that the government does good things for them. The Right wing has been fulminating against them ever since.

The coronavirus (and after it subsides, the climate crisis) is deadly to the Right wing talking points.

We obviously need a vigorous and fairly large government to deal with these big crises. We obviously need to stop tying health insurance to employment and go to medicare-for-all. Because at a time when they most urgently need health insurance, 3 million Americans just lost their jobs in the past week. In states where Republican governors gutted Obamacare, those 3 million are just up the creek if they get sick and need an intensive care unit.

Medicare for all is hated by some of the billionaires because it involves taxing them, and because it interferes in making a profit off people’s sickness, and because it gives the people the impression that they need government and that it can benefit them.

The kind of mass coordination that both the pandemic and the climate emergency require is impossible for the private sector to pull off. This is a job for both the state and federal governments.

We even need international collaboration among the planet’s governments, a true nightmare of the US Right wing.

The Right wing used to make fun of socialism, saying that it was the fear that somewhere, someone was getting rich.

But these planetary crises have turned the tables on this glib bon mot. It now seems clear that capitalism is the fear that somewhere someone is having their basic human needs met.

The nadir of US barracuda capitalism came the day before yesterday when four Republican senators tried to deep-six the government aid program for people and businesses harmed by the coronavirus on the grounds that the bill might allow a few of the laid-off plebs to get more money from the government than they would have earned in their dead-end jobs.

Bernie Sanders, who despite his age is the wave of the future, let them have it. His impassioned speech won’t be the epitaph of the big business- little government crowd, but if they had a modicum of shame and basic human decency, it would be.