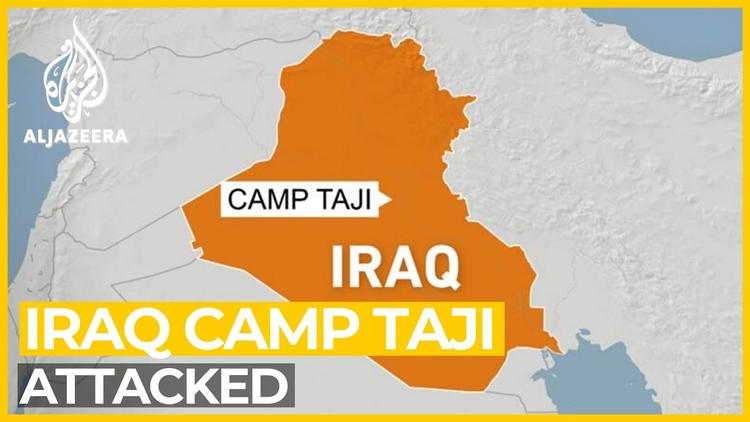 Ann Arbor (Informed Comment) – Three US servicemen were wounded, along with two Iraqi soldiers, during daylight hours on Saturday when some 33 katyusha rockets slammed into al-Taji Base north of Baghdad. Two of the US soldiers were seriously wounded and are in hospital in Baghdad.

The rocket attacks were likely revenge for US air strikes on Friday that killed 5 Iraqi soldiers and security police and one civilian, on a base at Jurf al-Sakhar. Kata’ib Hizbullah announced that its fighters took no casualties at all at the base. Indeed, it appears to have been wholly manned by the Iraqi Army but that used to have Shiite militiamen.

The US intelligence about that base appears to have been entirely out of date, so that the Trump administration actually bombed its own Iraqi ally, the very troops it is supposed to be in Iraq training. In any case, the Shiite militiamen that the US has begun assassinating from the air are, by an act of parliament, part of the Iraqi military themselves. This is a Keystone Kops routine, like everything in the Trump administration.

The Iraqi side of the Joint Operations Command has urgently pressed the government to accelerate the process of removing “foreign” (i.e. American) troops from Iraq. That is, Baghdad’s officer corps sees the US attacks on what amounts to the Iraqi National Guard as potentially destabilizing for the country, and would now prefer to take on ISIL remnants itself rather than risk Trump-induced instability. The Joint Command memo insisted that it is absolutely impermissible for a foreign military to bomb Iraqi facilities without the permission of the Iraqi government. This diction strongly indicates that the attack on the Jurf al-Sakhar base in Babel Governorate was carried out by the Trump administration without any consultation with its supposed Iraqi partner. The US is no longer acting like an ally in Iraq but like an occupier.

The new position of the Iraqi officers in the Joint Operations Command is all the more remarkable because it was set up to coordinate with the US, and some high-ranking Iraqi officers are pro-American. Army Chief of Staff Othman al-Ghanmi, a Sunni, received the Legion of Merit from the US military in 2017.

The Iraqi Parliament passed legislation in January demanding that the executive make swift arrangements for the departure of US troops from the country. This was a firm and urgent parliamentary demand, not as Secretary of State Mike Pompeo tried to spin it, and “advisory opinion.”

The tit for tat attacks began in late December, when the Trump administration blamed a Shiite militia, Kata’ib Hizbullah (Brigades of the Party of God) for an attack on an Iraqi base in Kirkuk, which killed a civilian US contractor. The Iraqi military says that the group was not operating in Kirkuk, and had not been for 18 months, and that the attacks came from ISIS. Trump nevertheless bombed Kata’ib Hizbullah bases, killing two dozen Shiite fighters. A week later he assassinated the leader of the group, Gen. Abu Mahdi al-Muhandis, at Baghdad International Airport, along with Iranian Gen. Qasem Soleimani. Trump said they were coming to Iraq to kill Americans, but the Pentagon after action report mentioned no such thing, and the assassination appears to have been American revenge for the years of Soleimani’s activities blocking US initiatives in the Middle East. During 2014-2018, however, Soleimani and al-Muhandis were key de facto allies for the US in the battle against ISIL.

The US sees the Iraqi Shiite militias as purely cat’s paws of Iran, but they have their own strategic goals and there does not appear to be a tight line of command. By killing an Iraqi Shiite commander on Jan. 3, the Trump administration picked a feud with these Iraqi Shiites in their own right. Feuds can go on a long time

Since more US troops were wounded on Saturday, it seems likely that the US Air Force will attempt again to bomb Kata’ib Hizbullah facilities, and that this bombing will produce more rocket attacks on US troops.

It is difficult to see how this low intensity war ends any time soon.

The concern of Iraq’s Joint Operations Command that the Trump administration could destabilize Iraq is well-founded. The Shiite militias that helped defeat ISIL are popular in some quarters, and they are also in parliament, with the second-biggest bloc of MPs. No Iraqi prime minister can afford to alienate them, and the Iraqi government is much more likely to try to get the US out than to turn on the militias.