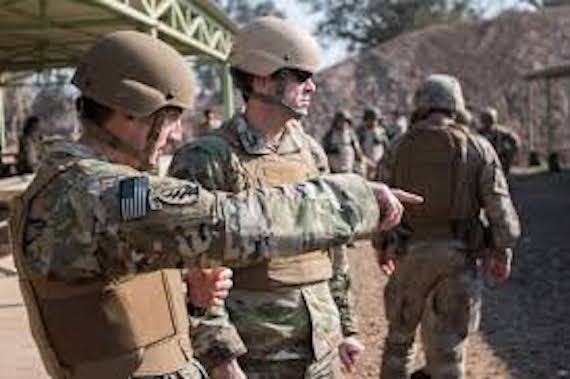 Ann Arbor (Informed Comment) – Tom O’Connor at Newsweek reports that 18 katyusha rockets slammed into al-Taji Air Base in Iraq on Wednesday, killing two Americans and one Briton, and leaving 12 other Coalition personnel injured.

In response, US fighter jets conducted air strikes against the Haydariyun brigades of the Kata’ib Hizbullah, a Shiite Iraqi militia, in Albu Kamal on the Iraq-Syria border, allegedly killing 40 officers and fighters, including the commander of the Haydariyun, Gen. Wisam al-Tufayli. It is alleged that officers of the Iranian Revolutionary Guards at the base were also killed, and that dozens of Iraqi Shiite militiamen were wounded. The militias and the IRGC were allegedly hit because they were planning to attack US military personnel in Iraq.

The Iraqi president, Barham Salih (a Kurd), and the caretaker prime minister, Adel Abdelmahdi, roundly condemned the rocket attacks on US personnel, which were likely carried out by Shiite militia. ISIL is not known to have katyushas. The Iraqi military command condemned the katyusha attack as “an extremely dire security challenge and an act of enmity,” and called for a parliamentary inquiry.

In contrast, Shiite leader Muqtada al-Sadr, whose Sairun Party is the largest single party in parliament, accused Donald Trump of creating the novel coronavirus and unleashing it on Iraq as an act of biological warfare. Al-Sadr had called for US troops to depart Iraq at a huge rally in January.

The al-Taji Base is located just north of Baghdad on the way to Samarra and Tikrit, in a strongly Sunni Arab area. It is notorious for being divided in two, with Iraqi troops living on one side and Americans (in distinctly better conditions) on the other. Americans were put into the base after the fall of Mosul to the ISIL terrorist state in June, 2014, as the US strove to help the Baghdad government defeat the ISIL menace. They are still doing training of Iraqi troops and had been helping with mopping up operations against ISIL remnants, but it appears that they are no longer in the field.

The Iraqi parliament voted in January for a bill requiring the Iraqi executive to expel all US troops, but the Trump administration refuses to leave, turning US troops in Iraq into an occupation force. The Kata’ib Hizbullah militia and its allies demanded that the Iraqi government move the US troops out of the country soon, or they would take matters into their own hands. It appears that they have now done just that.

On January 3 of this year, Trump abruptly assassinated Iranian Gen. Qasem Soleimani and Iraqi Gen. Abu Mahdi al-Muhandis as they arrived at Baghdad International Airport, which any sane person would have known would put the lives of the some 5200 US troops in Iraq, along with US civilian contractors, in danger. They are nested among Shiite militias, whom the Iraqi parliament has declared a sort of national guard, and on whom their safety had in part depended. The Shiite militias are largely pro-Iran, but had accepted US help in ending their existential enemy, ISIL. That alliance of strange bedfellows suddenly ended when Trump struck at the Shiite militias in Iraq as well as at their Iranian mentor.

Trump appears to have believed that there would be no significant consequences of the assassinations, given that Iran is weak. This estimation may have been true in the short term, but both Iraqi Shiite militias and Iran play a long game, and the fact is that Trump’s rashness just got two US soldiers killed.

Trump charged the two generals with planning an imminent attack on Americans in Iraq. This implausible allegation was not repeated by the official Pentagon account of the assassination, from which it seems clear that the assassinations were more about a Trump grudge about past Soleimani victories against the US than about anything he was planning for 2020. Iraqi prime minister Adel Abdel Mahdi told parliament that he had invited Soleimani in an attempt to mediate between Iran and Saudi Arabia. Soleimani arrived on a commercial flight and checked through visa control with his diplomatic passport, not the profile of a covert operative arriving to engage in terrorism against the United States (which, aside from the troops and an embassy, has very little footprint in Iraq, anyway.)

Trump also alleged that the Shiite Iraqi Kata’ib Hizbullah was responsible for a rocket attack on a base at Kirkuk that killed a civilian US contractor. The Iraqi Ministry of Defense disagreed with this assessment, pointing out that Kata’ib Hizbullah had no presence in Kirkuk, and had not had such a presence since summer of 2018. In late December US air strikes on Kata’ib Hizbullah positions in northern Iraq left dozens of their fighters dead, even before the strike on Baghdad International Airport. The Kata’ib Hizbullah bases Trump hit had been fighting the remnants of ISIL.