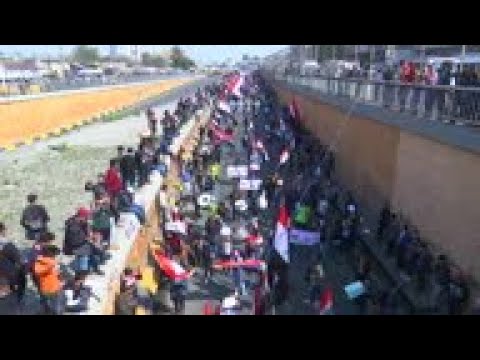 ( Middle East Monitor) – Muhammad Allawi has recently been appointed as Prime Minister of the Iraqi transitional government, since when the auction for government positions has quickened; in this it is no different to previous governments. They are the same governments that the youth rose up against in October last year and they are still paying the price of this with their blood as they seek to end such regimes.

What the current crop of politicians apparently do not want to understand — or they overlook selectively — is that recycling the same group or their relatives, or even individuals who were appointed in previous criminal governments, is what the people on the streets believe to be the cancer that is eating away at Iraq’s political system and what is left of the state. This applies from the highest official to the most junior employee, including those in the economic and security sectors.

What is more dangerous than all of this is that it has become an integral part of daily life. It has become normal for ordinary people to have to protect themselves, to seek benefit from somewhere, or simply to make do. Corruption, in all its forms, is no longer restricted to the ruling class, but has made its way down to society in state departments and their employees, schools, hospitals, in the streets, airports, ports, markets and even families. This threatens their survival and has made it easy for radicalisation, terrorism and fragmentation to spread. This is what the country has experienced during the years of occupation and what has resulted from the armed militias and terrorism that feed on corruption, especially with the availability of massive oil revenues, which is what the uprising wants to eradicate.

Ordinary people reject the recycling of politicians, not because they do not like the look of them; or because they are fond of sleeping in the squares in protests away from their homes and families; or out of desire for such positions themselves; but because they know very well the magnitude of the disaster caused by corrupt rulers and thieves. They also know what having them remaining in their positions will do to the country.

This is a quantum leap in collective awareness and making it a priority is necessary. It is a continuation of what the ordinary citizens in other countries have achieved; they too are living in transition from one government to another, although there are some differences. In Tunisia, for example, there is a successful model of transitioning from a tyrannical regime to a democratic government. It is no longer a secret that the course of the revolution would not achieve the youth’s aspirations for a better future and the independence of the state and its security, if the corrupt government established by the former regime was not eradicated. Despite the political change, the society still lives part of the past, and therein lies the danger.

Transitional justice failed in Iraq after the early years of occupation for many reasons, including the inability to work under the occupation, the racist policies of its local sectarian governments, and a lack of political and security stability. The path to transitional justice, including accountability, truth, dignity and reparations in Tunisia, did not achieve the expected success. The International Centre for Transitional Justice noted this a few days ago at an international conference in Tunisia on truth, accountability, recovery of looted funds and how transitional justice can combat corruption.

The centre says that the disruption was caused by limiting transitional justice to violations of civil and political rights. They noted that some countries, such as Argentina, Chile and South Africa, focused on crimes such as torture, murder, forced disappearances and prolonged detention without looking into the corruption that was endemic among officials. Notable exceptions have been mentioned in only a few countries, where transitional justice contributes to pursuing accountability for both human rights violations and corruption.

The situation in Iraq differs in that it is experiencing transitional justice in several ways, perhaps the most important of which is the lack of sovereignty, the absence of a government that represents the people, the prolonged violations of human rights, and the country ranking high on the list of administrative and financially corrupt countries. The magnitude of theft in contracts and currency smuggling has reached hundreds of billions of dollars, figures that ordinary citizens cannot fully comprehend until they are expressed as $15,000 per person (if we are counting only half of the wasted income from oil only since the occupation in 2003); that is $100,000 per Iraqi family. However, following other countries’ experiences with transitional justice, such as Tunisia and South Africa, and looking at their experience in combating corruption and recovering illegally looted and acquired assets, as well as holding the corrupt officials accountable, it is necessary for judicial reform and the reform of other state institutions in order to benefit from their successes and avoid their failures.

The similarity of oppressive authoritarian regimes and the restriction of national wealth to a few corrupt hands makes the experiences of confronting such regimes and uniting the efforts to get rid of them valuable beyond just one country. This imposes forms of struggle and solidarity that are not necessary new, but in some cases take us back to the era of national liberation.

We are noticing this among the youth in the liberation arenas in Iraq, Algeria and Lebanon. The concepts that peoples have long fought to regain, because they are part of their rights, such as their homeland, freedom, dignity and punishment of the oppressors and the corrupt, have been restored to the forefront of the growing realm of consciousness. They are the same values that the colonists wanted to erase and managed to do so over time, in cooperation with the local corrupt elite. This success emerged in the form of authoritarian and sectarian governments in addition to submission to the occupier.

The depth of the demands of the uprisings for the homeland became clearer with the continuation of the protests and the martyrdom of young people almost daily. The demands to topple the regime and hold the killers accountable, as well as calling for an end to nepotism and favouritism, are essential to determining the composition of the next government, albeit transitional, and to establish the foundations of any future national administration. It is a qualitative leap that combines the ambition to clean up politics, the judiciary, the economy and practices that have permeated the structure of society for decades. These are necessary tasks if Iraq is to rise from its repression.

The uprising, with the courage and sacrifices of its youth, has given the people hope for real change, and not just recycling the corrupt politicians, which was the case in the past. It has also raised awareness that the injustice, humiliation and deprivation of rights are not targeted at individuals, but are aimed at all citizens collectively. This is what the current government, with all of its illegal weapons used against protestors daily, brutally and immorally, will not be able to eliminate forever, despite its desire to do so.

Haifa Zangana is an Iraqi novelist.