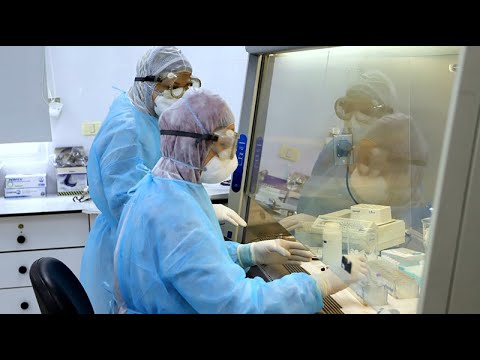 ( Middle East Monitor ) – Within the next few days, Palestinian prisoners held by Israel may be hit by the coronavirus pandemic, causing major unrest in the prisons. This is the reality facing prison staff and their prisoners at a time when governments around the world and international organisations are trying to overcome the virus and failing.

The Palestinians behind bars in Israel have nothing to defend themselves from the virus, except perhaps a bar of soap, on top of which they still have to cope with the official neglect and brutality of the Israeli occupation authorities. The Minister of Internal Security delights in the punitive measures imposed on the prisoners recently. Above it all hovers the fear of the virus taking hold among the Palestinian prisoners.

The negligence of the Israel Prison Service towards those in its “care” is normal; it rarely responds to prisoners’ demands and this time is no different. So the punitive measures remain in place, and the very basic resources to curb the spread of the virus are being denied to them. Even basic pantry basics, such as olive oil, are being refused, and the amount of vegetables that prisoners can buy has been cut; they are also banned from buying-in meat and fish, important sources of protein. Moreover, and arguably more seriously in the present context, prisoners have been banned from buying cleaning products used to sanitise the bathrooms and cells.

Regulatory bodies and their representatives have not been allowed to monitor the conditions of prisoners who may have contracted the virus and are now isolated in Megiddo Prison. This is something that the prison administration is trying to keep secret from the Palestinian public, fearing their reaction. This has put the prisoners themselves on the edge of an open confrontation with the occupation authorities in defence of their right to live and to return to their families.

Israeli disregard for Palestinian prisoners’ lives peaked when those in Megiddo demanded that the officers test all of the prisoners for Covid-19 and provide them with protective kit, such as masks, gloves and disinfectant. The Israel Prison Service’s response was to tell them, “Use your socks to make masks, and your soap to disinfect your cells.” Socks and soap were among the items banned recently in an obvious attempt by the prison system to provoke the prisoners at a time when the world is looking the other way and trying to overcome the coronavirus pandemic.

Despite their heroic efforts to protect themselves, the Palestinian prisoners held by Israel are unlikely to succeed; it will be a miracle if they do. This will throw a sharp focus on their situation during this global crisis. The conditions that Israel has allowed to fester in the prisons where it holds Palestinians — including the ramshackle physical environment as well as the shambolic “healthcare” and systematic medical neglect — almost guarantees the spread of the virus. Each unit houses 80 prisoners, with a high level of contact amongst them. When one prisoner is infected, they cannot be isolated from the others effectively. This will transform the prison blocks into mass isolation units, and possibly mass graves.

In such circumstances, given the legal duty of care that the Israel Prison Service has towards all prisoners, including those from among the population living under occupation, the Palestinians being held by the Israelis have the right to be released on licence or parole. They are not violent career criminals; they are, in the main, political prisoners who stood up against the military occupation of their land. They have a legitimate right to do so, and so should be set free now before it is too late.

The people of Palestine must rise to the challenge of their responsibilities towards their friends and relatives who are imprisoned in Israel. They have always done so in the past, and now is not the time to leave the prisoners exposed. They should not accept the factions’ institutional failure to put pressure on the occupation authorities to get the prisoners released. Action is needed now.