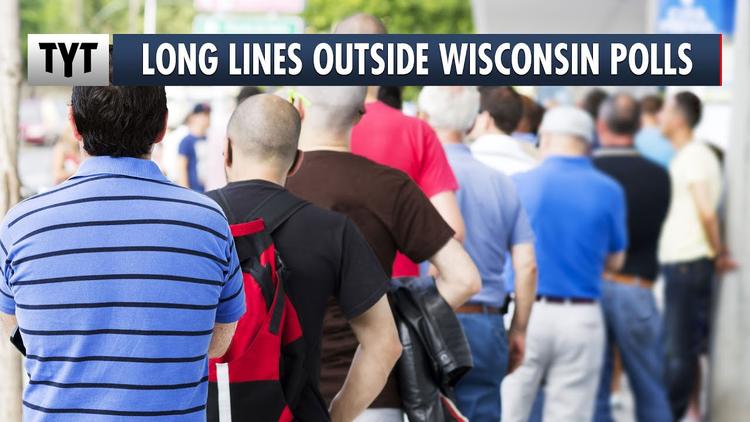 “People are being forced to risk their lives to place their vote or fulfill their right as an American to vote.”

“These are dangerous times for democracy.”
—Aquene Freechild, Public Citizen

“It’s not going to be a safe election. People are going to get sick from this,” Brook Soltvedt, a 60-year-old textbook editor who is in charge of running the polling place at Thoreau Elementary School in Madison, Wisconsin’s capital, told The Cap Times.

Soltvedt added that though she thinks “the city has done about the best that they can do,” she worries that the election will cause voter confusion and health consequences. In an effort to protect her 77-year-old husband, Soltvedt said she plans to “strip in the garage, put my clothes in the washer, and go downstairs for two weeks.”

After days of Wisconsin’s Republican Assembly Speaker Robin Vos and Senate Majority Leader Scott Fitzgerald resisting widespread demands to delay in-person voting and expand absentee voting—like other states have done—Evers on Monday issued an executive order to postpone the election until June 9. However, the order was overturned by the state Surpreme Court Monday night.

The right-wing U.S. Supreme Court added insult to injury on Monday, overturning a lower court ruling that extended the deadline for absentee voting. Absentee ballots must be postmarked Tuesday or returned to a polling place or local clerk’s office by 8 pm. Local leaders

“What that meant was that, for a substantial portion of the electorate, Election Day presented a harsh choice,” John Nichols wrote Tuesday in a column for The Cap Times. “Those who had applied for absentee ballots but not yet received them, and those who had not applied for an absentee ballot by last Friday’s deadline, were forced to decide whether to risk exposure to the coronavirus in order to exercise their right to vote.”

Nichols denounced the dilemma faced by voters as “unreasonable” and characterized Vos and Fitzgerald as “legislative charlatans” who “threw tantrums at a point when everyone else was working to save lives, keep people healthy, stabilize the economy, and preserve democracy.”

Other concerned individuals and advocacy organizations issued similarly scathing critiques of Wisconsin’s lawmakers and high court while circulating on social media footage of longs lines at the limited polling stations that were able to open.

“Today there are five Milwaukee polling locations open. Usually there are 180 sites,” tweeted the group March for Our Lives. “There’s no way to skirt around it; this is wrong. People are forced to gather in long lines at central locations in the midst of a pandemic. Wisconsinites deserve better.”

Aquene Freechild, co-director of Public Citizen’s Democracy Is For People Campaign, said in a statement about the Wisconsin election that “these are dangerous times for democracy.”

“Vos and Fitzgerald know that, with only five polling locations open in the Democratic stronghold of Milwaukee, holding the election now will suppress the Democratic vote more than the GOP vote,” Freechild added. “That outcome will skew votes for some statewide elections, such as for the state Supreme Court, to their party.”

In a statement Tuesday, Harvard Law School professor and Equal Citizens founder Lawrence Lessig said, “That partisan politics would drive partisan leaders to force citizens to choose between accelerating a pandemic and exercising their right to vote is outrageous.”

Teasing an episode of the Intercepted podcast to be released Wednesday, journalist Jeremy Scahill—who grew up in Wisconsin—tweeted an audio clip of Milwaukee Health Commissioner Dr. Jeannette Kowalik explaining that “unfortunately it’s not” safe to tell voters to go to the polls.

“People are being forced to risk their lives to place their vote or fulfill their right as an American to vote. It’s just unbelievable that we are even having this conversation right now,” Kowalik said. She added that it has been “disheartening” to work behind-the-scenes on this issue and some people in positions of power in Wisconsin “are killing people by the decisions that they’re making.”

Service Employees International Union (SEIU) president Mary Kay Henry tweeted a video from a Milwaukee polling site and wrote that “this is a deliberate attempt by WI GOP to exclude voters, to limit participation, [and] to undermine democracy.”

In a lengthy Twitter thread, AFL-CIO president Richard Trumka, declared that “it’s unconscionable that Wisconsin voters are being forced to choose between their health amid a pandemic and their constitutional right to vote.”

“It’s unconscionable that Wisconsin voters are being forced to choose between their health amid a pandemic and their constitutional right to vote.”
—Richard Trumka, AFL-CIO

“Taking away the fundamental right to vote that so many have fought and died for is disgraceful. Democracy in our country is dying, and those meant to uphold our Constitution have failed miserably in their duty,” Trumka added. “Working people see what’s happening, and we’re not going to stand for it in November and beyond.”

Common Cause Wisconsin called Tuesday “a day that will live in infamy.” The group’s director, Jay Heck, said in a statement that “Wisconsin is the only state in the nation that has failed to step up and respond responsibly and safely to the current national health pandemic emergency. We have seven months until the general election and there is time to fix these issues before November to ensure we are protecting public health and the right to vote.”

Voters who participated in Wisconsin’s Tuesday election weighed in on local races as well as the Democratic presidential primary contest between Sen. Bernie Sanders (I-Vt.)—who spoke out against the state Supreme Court decision—and former Vice President Joe Biden, who remains the frontrunner and recently claimed that in-person voting could be done safely.

According to the newspaper:

Mueller said a volunteer at the door is spray-sanitizing everyone’s hands as they enter, and voters are being instructed to take a pen to vote and then either throw it away or take it home with them.

Poll workers outfitted with masks and gloves are working behind sneeze guards made by the village’s public works employees. There are Xes on the floor at 6-foot intervals.

“We have a person wiping down the poll booths after everyone votes,” Mueller said, “and then randomly wiping down other areas in the voting location.”