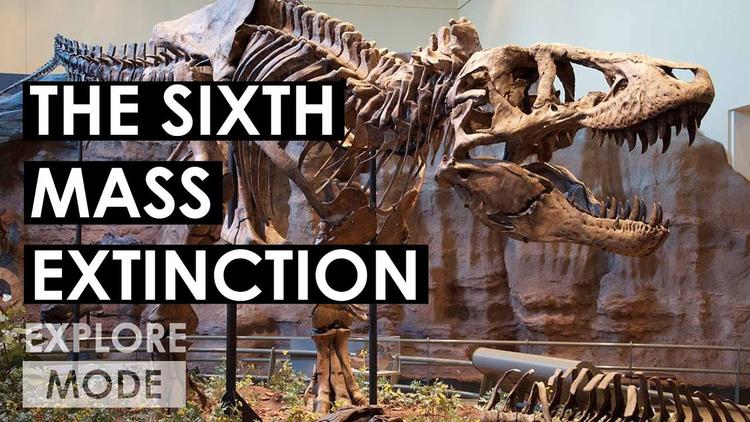 As the virus rampages through the world, brutally exposing frailties in political and health systems worldwide, what it has also laid bare is an intangible about human nature: the failure of imagination. We, humans, quite simply fail to grasp the explosive nature of exponential growth and, therefore, its consequences. It is a lesson that many governments have learnt the tragic way with Covid-19.

Infections began slowly in every country, but then doubled every few days, estimated at an average of 5 – 6 days globally. At this rate, a single infection on day 1 increases to about thirty infections in one month. Doesn’t seem like an imminent emergency yet. But if this rate is sustained, it would escalate to over a million cases in 4 months (case today), over a billion in 6 months, and nearly the whole population a couple of weeks thereafter. If the time for doubling increased to 10 days, covering the whole population would be delayed by merely 4 additional months. That is the nature of exponential growth.

Exponential growth swiftly, inevitably, swamps anything in limited supply (in this case the population), which is why it cannot be allowed to sustain. Hence, stringent social distancing to slow the transmission rate.

Confirmed cases and deaths due to Covid-19. Note the shape: slow to begin with, and then the explosively sharp rise. This is exponential growth.

Two other escalating global problems that our planet is faced with are the climate crisis and wildlife mass extermination that we, humans, are responsible for. Unfortunately, discussions on the genesis of and response to these crises have perpetually suffered from a sense of abstraction. Some of these, however, can now be appreciated far better in the context of how the virus outbreak is playing out.

Let us turn our attention to the dominant growth or bust economic doctrine that stipulates that an economy is healthy only if it growsby a certain percentageevery year. What may not be immediately obvious is that “percentage growth” amounts to exponential growth. At the roughly 2% growth rate of Northern countries, their economies double every 35 years. India’s economy would double every 10 years if it sustained growth at the generally touted rate of 6-7%.

The problem is that rising wealth associated with economic growth is linked to ballooning luxury consumption: electronic devices, air-conditioners, private vehicles, flights, cruise ships, house furniture and appliances, junk food, and fashion, to name some. Manufacture and transport of these are intimately linked to the use of physical resources – fossil fuels, metals, minerals, and fresh water to name a few – all of which are limited supply.

By these arguments, we would expect that the logical consequence of an exponential growth in GDP must be an equally rapid rise in our use of planetary resources. This is, in fact, exactly what has occurred: 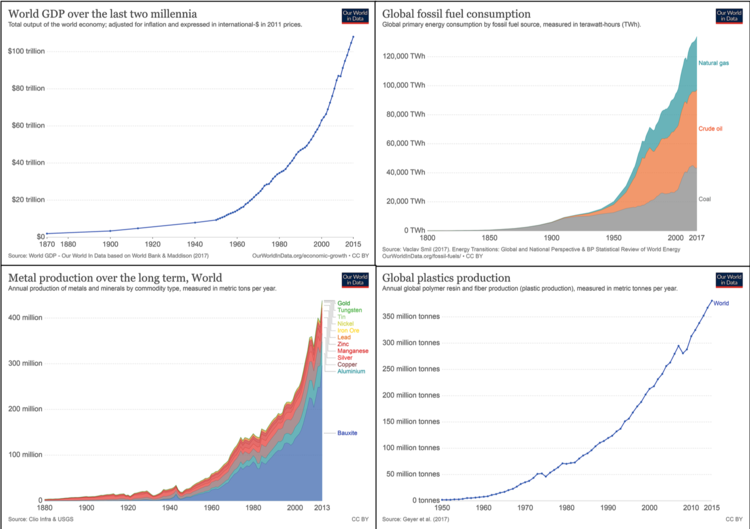 Growth in GDP, use of fossil fuel, metals and plastics over the last several decades. Note how the shape of each of these charts is exactly like the increase of coronavirus infections and deaths: they are all growing exponentially.

The meteoric (exponential) rise in our want for new resources has made us invade and destroy natural habitats for their extraction, and the consequences of their use and disposal have been escalating greenhouse gas emissions, desertification, air and water pollution. This is the genesis of the anthropogenic global problems of climate change and wildlife mass extermination. Continuing business-as-usual for much longer spells disaster for all life on this planet, and will precipitate a vastly greater scale of tragedy than the coronavirus.

While complacency marked action by various countries at the initial stages of the virus outbreak, there is no recent precedent for the subsequent global-scale behavioural change that has followed. Consequences such as the fall in China’s carbon emissions and air pollution have been dramatic, even if possibly temporary.

Climate activists have been demanding for decades many of the behavioural changes that Covid-19 has suddenly effected. Scientists have been sounding increasingly urgent alarms about the deadly consequences of our rapidly degrading environment and the climate crisis. Yet, complacency, if not outright refusal, has marked the response by most countries. One of the tactics used to delay climate action is to talk up the uncertainties that persist in quantifying the consequences of climate change. Particularly so at regional or local scales that are relatable and pertinent to each of us. The fact is that there is considerably greater range in climate model projections of future sea level rise around the Mumbai, Cape Town or New York City coastline than the range in projections of the rise in the global average sea level.

Yet, given the more perceptible threat of Covid-19, uncertainties in how it may spread in our region has not stopped countries from taking forceful precautionary action, despite dire warnings of an economic recession. That brings us to the “precautionary principle”: faced with potentially catastrophic or irreversible events about which scientific knowledge may be incomplete, it emphasizes caution. Covid-19 has arguably achieved more in 3 months to teach us that than climate activists have managed to do over decades. Will we learn? Or, once past this crisis, will history repeat itself, simultaneously as a tragedy and a farce?

Chirag Dhara is a physicist and climate scientist.

This article is reprinted with the author’s permission from first published in The Hindu.