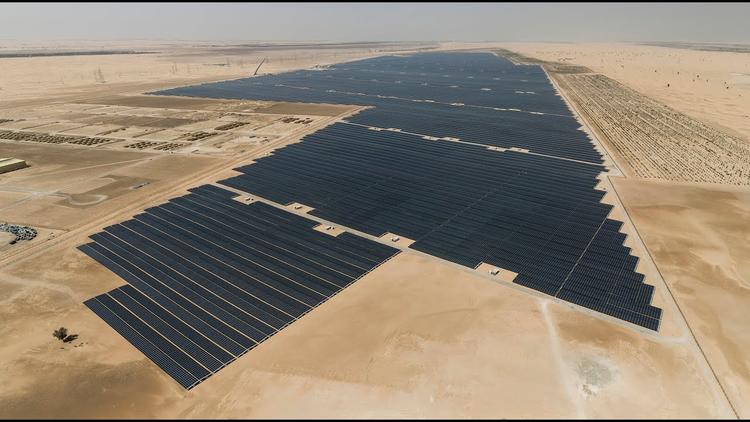 Ann Arbor (Informed Comment) – Abu Dhabi has accepted a historically low bid of 1.35 cents a kilowatt hour for a new giant 1.5 gigawatt solar farm, to be built at al-Dhafra by the largely government-owned French consortium Électricité de France (EDF) and China’s Jinko. The price is 44% less than was paid for the Noor Abu Dhabi solar installation just 3 years ago, showing how rapidly solar prices are plummeting.

Jasim Husain Thabit, the official in charge of implementation of the project, remarked that Abu Dhabi had made a radical change in its electricity generation, by focusing on renewables.

Abu Dhabi is one of the 7 emirates that make up the United Arab Emirates (UAE). The UAE has a plan to get 50 percent of its electricity from renewables by 2030, a goal that the new al-Dhafra plant will help it achieve. The new plant is set to open in 2022.

The previous record low was 1.56 cents a KWh for an 800 MW project in Qatar offered by Total and Marubeni in Qatar’s January.

It may seem surprising that Gulf energy giants such as Abu Dhabi and Qatar are going in for solar energy. In part, geopolitics plays a role here.

Qatar is one of the world’s leading producers of natural gas but it has little petroleum. It has been under blockade by the UAE, Saudi Arabia and Bahrain since 2017, when they appear to have plotted to invade and overthrow its government. Turkey’s threat to intervene made them back off any military action, but they followed through on a diplomatic and economic blockade. Qatar responded in part by offering to produce more natural gas, to woo gas-consuming nations such as Britain (which gets a third of its natural gas from Qatar). Obviously, the less natural gas Qatar consumes at home, the more it can sell abroad. And besides, it has all the sunlight in the world and solar power generated in Qatar helps make the tiny country more independent and secure.

The UAE, in contrast, is one of the world’s foremost petroleum producers, but it has little natural gas. In fact, even after it blockaded Qatar, it still honored contracts to import natural gas from that country, which must be awkward. Despite being on the receiving end of Emirates dirty tricks and hostility, Qatar kept sending Abu Dhabi natural gas. So obviously, if the UAE can go to solar power, it can cease its dependence on Qatar, which would make its de facto ruler, Mohammed Bin Zayed, happy. But it is also the case that Abu Dhabi has enormous amounts of sunlight, and at 1.35 cents a kilowatt hour, solar is substantially cheaper than natural gas.

Coal used to be the cheapest form of energy, but now it is more expensive than gas, wind and solar, which explains why coal plants are closing right and left. Indeed, whole countries, such as Austria, have gone coal-free.

More good news: We are only at the beginning of the revolution in inexpensive solar power. The German International Technology Roadmap for Photovoltaic (ITRPV) estimates that in 2019 photovoltaic cell module shipments exceeded 650 gigawatts. Moreover, the price will go on falling, by as much as more than a fifth a year for the foreseeable future, because of improvements in solar panels. Solar panels still have a relatively low rate of conversion of photons to electricity, around 19 percent in real world conditions. If a panel could convert more of the sunlight that hits it to electricity, that would bring the price per kilowatt hour down tremendously.

Informed Comment recently reviewed press reports that Egypt has mothballed a planned coal plant in favor of a 1.5 gigawatt solar plant that will rival in size the one now planned for al-Dhafra.