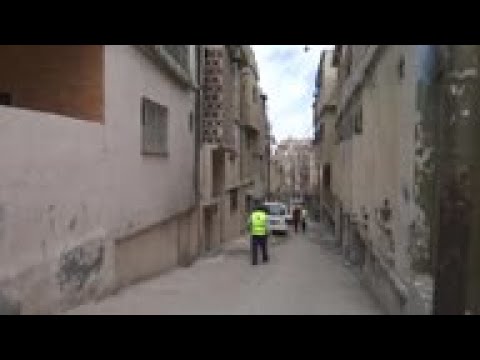 Ann Arbor (Informed Comment) – The age bias of the novel coronavirus has geopolitical implications. Although it is not true that it leaves children and youth alone, it is true that their symptomatic infection rate and mortality is tiny compared to that of the elderly. In Europe, WHO reports that up to half of coronavirus deaths have been in nursing homes. In part, that statistic may point to health departments’ neglecting nursing homes in favor of concentrating on hospitals. But in part, it reflects the greater vulnerability of the elderly.

Although Palestinians living under Israeli Occupation face many disadvantages in dealing with the coronavirus, they do have the advantage of age. They may be poor and live cheek by jowl, two things that have led to high death rates among African-Americans in the US. But they are young.

The median age of Palestinians in the West Bank and Gaza is 20. That means half the population is under that age. Palestinians, for all the attempts by the Israel lobbies to depict them as dangerous, are mostly children.

The median age of Israelis is 30, still young but substantially older than the people they Occupy.

The elderly of Gaza, on the other hand, are particularly at risk, and despite being a small proportion of the population their numbers are substantial. Israel is interfering in testing, and is blockade has degraded hospital capacity. So where the virus does hit elderly Palestinians it will be devastating, and Israel’s blockade must be lifted.

Moreover, many Palestinian families in Gaza, expelled from their homes in what is now southern Israel by militant Zionist gangs in 1948, are still stuck in refugee camps. The conditions in the camps could make an outbreak devastating to its older residents.

Jeremy Rossman at The Conversation reports that “The fatality rate for the disease is estimated to be 0.66%, according to data from China. In other words, 0.66% of people who are formally diagnosed with COVID-19, die. But the rate varies dramatically for different age groups, ranging from 0.0016% for children under ten to 7.8% in people over 79. Similar rates are seen in New York city.”

Palestine (the West Bank and Gaza) has had 484 reported coronavirus cases as of April 24.

Just two of the people who came down with it have died so far.

And no one is currently at an ICU (not that they have many ICUs, given the constraints on them of Israeli occupation).

These are small numbers for a population of some 5 million, and the youth of that population may be one explanation.

Palestinian Health Minister, Mai Alkailah, says that “75% of the cases are workers in Israel and people who interacted with them and were infected, and 65% are males and 35% are females.”

The coronavirus reveals social inequalities and inequities the way a blacklight reveals traces of blood at a crime scene. Although they have now been ordered home, ordinarily some 100,000 West Bank Palestinians work in Israel. It is among these workers that most of the coronavirus cases originated.

We hear in the US calls for appreciation for front line farm and other workers who used to be branded “menial.” Shouldn’t the status of these Palestinians workers in Israel, once they can resume their jobs, be elevated, too?

Israelis had been following a Gulf model, trying to import labor from places like Thailand so as to avoid becoming dependent on, and integrating their economy, with the Palestinians. But one wonders whether, when things begin picking back up economically, the Israelis will have to meet their labor needs with Palestinians now, since it may be a while before international travel and large migrant labor flows from Asia pick up again.

Famously, the Milan area in Italy was deeply affected by the coronavirus because the population is disproportionately elderly.

The young populations of the world have many advantages at this point. They may be able to go back to work earlier, since they will have a lot of people with the antibodies, who were infected but had only mild symptoms or were even asymptomatic. Some of these advantages will be difficult for Palestinians under occupation to take advantage of, since the Israelis have constrained them economically and Trump has kneecapped the aid agency UNRWA. But they may come out of the crisis with less trauma and more hope than the aging populations of the world.

As for the Palestinian elderly, the coronavirus and the Israeli occupation are twin grim reapers that threaten their lives on a massive scale.