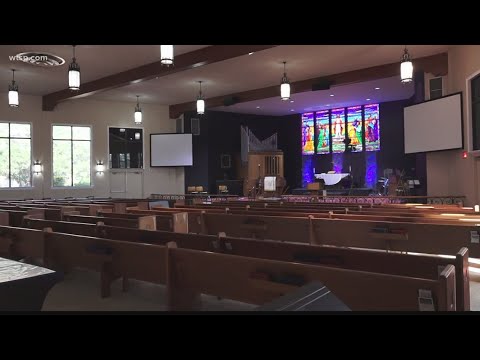 Ann Arbor (Informed Comment) – Trump on Friday attempted to declare church services “essential” and called for their reopening, threatening to overrule governors who begged to differ. Although he paid lip service to synagogues and mosques, he was obviously mainly interested in supporting his evangelical base.

Moreover, Trump called the Charlottesville neo-Nazis “very fine people,” and said he wanted to stop Muslims from coming to the US, so the likelihood he stays up at night worrying whether synagogues and mosques are open is low.

I wrote this week at Tomdispatch.com about the way right wing religion has made the pandemic worse, whether by urging congregations to defy the odds of infection or denying that the coronavirus can strike the true believers.

As Aylin Woodward writes at Business Insider, places of worship have sometimes been super-spreader hotspots. She notes,

“In early March, a 57-year-old Arkansas pastor and his wife attended church events and a bible study group a few days before they developed coronavirus symptoms. Of the 92 people they came into contact with at the church, 35 got sick. Seven had to be hospitalized. Three died. Contact tracers from the Arkansas Department of Health then discovered 26 more cases and one other death among people who reported contact with the churchgoers.”

There’s nothing special in this regard about churches, synagogues or mosques. Infectious diseases just like big gatherings of people. Just talking loudly can spew air out at high velocities and expose people being addressed to a high viral load. That is why the University of California is not opening this fall.

The Roman Catholic Church and most mainstream Protestant churches are following scientific advice about social distancing. It is mainly a segment of evangelicals who are agitating for services to resume.

1. White evangelicals are the only segment of the US public, at some 16% of the population, who have never wavered in strongly supporting Trump. This is because in part they are single-issue voters and believe Trump will stack the Supreme Court so as to overturn Roe v. Wade and hence outlaw abortion. It is in part because white evangelicalism is sometimes a form of latent white supremacy. Otherwise, why is there a white Southern Baptist Convention and a Black Baptist church? If they are all Baptists, why not worship together? Some do, of course, and some evangelicals vote Democratic, so by no means all of them are pro-Trump or racist. But there is a problem here. To the extent that Trump wants to please this constituency, he would make pretty much any announcement they want.

2. Although evangelicals had stuck with Trump unreservedly until this spring, even their patience has been tested by his incompetent, lackadaisical and sometimes inhumane response to the coronavirus crisis. From mid-March to early May, he lost 6 points among them on his handling of the issue. That Pew poll would have sent the White House and Trump reelection campaign into a panic. Friday’s declaration in favor of reopening churches was meant to erase that loss of confidence.

3. Tom Strode at the Baptist Press reports that Southern Baptist leaders in Minnesota and California have remonstrated with the governors of those states
about closure orders that have allowed some retail stores to open on a limited basis but not churches. Minnesota, e.g., allows retail stores to fill half their capacity, but only lets 10 people attend worship services. The Southern Baptists argue that the First Amendment should allow them to operate freely.

The First Amendment prevents the Federal government from “establishing” a state religion. State constitutions have mirrored that clause. But the only way for a governor’s closure order to violate the First Amendment or its state equivalent would be for the governor to favor one religious group over another, which Minnesota and California have not done.

Although I’m sure some of the church officials who are upset are convinced that they need to hold services for the spiritual good of their congregations, it is also the case that people don’t tend to give a lot of money to churches when they don’t attend them, and a lot of pastors have run into a money crunch.

In any case, the opportunity for Trump at least rhetorically to stand with Southern Baptists against Democratic governor Tim Walz couldn’t be passed up, since Minnesota is a swing state for the presidential election and is a state Trump barely lost* in 2016. Whipping up enthusiasm on the religious Right is important to Trump if he is to have any hope of reelection.

4. Right wing churches are, quite illegally, actually ongoing campaign rallies for Trump. Churches are given tax exemptions, in return for which they are supposed to stay out of politics. But a lot of evangelical churches have gladly taken our tax money but then turned around and openly supported Trump. For them to remain closed is very inconvenient for Trump’s reelection campaign, depriving him of a key set of megaphones.