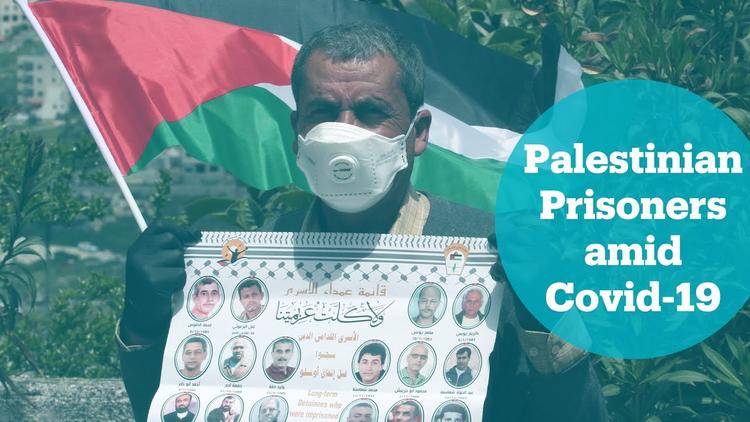 Hunger strikes get more headlines, but Palestinians find a range of other ways to resist in prisons everyday.

( Waging Nonviolence) – Amid the ongoing spread of the COVID-19 pandemic, Palestinians are among some of the most vulnerable people facing this global crisis – and Palestinian prisoners are in even greater danger of contracting the virus.

Having conducted research with Palestinian prisoners on acts of everyday resistance, I want to share three ways Palestinians have resisted during their imprisonment: by establishing a “counterorder” — or self-governing system in prisons; by pursuing political education; and by engaging in acts of noncompliance.

Incarceration is widespread across Palestinian society, regardless of geographic location, socioeconomic standing or political affiliation. Approximately 20 percent of the population in the Palestinian territories — and close to 40 percent of the Palestinian male population — have been detained or imprisoned at least once, including an estimated 500-700 minors every year. Some detainees have been in prison for decades, while others have been held for days or weeks at a time in detention, and many have been arrested on multiple occasions.

Widespread incarceration began after the 1967 war, coinciding with the start of the Israeli military occupation of the West Bank, including East Jerusalem and the Gaza Strip. From the early days of imprisonment however, Palestinian prisoners have organized to claim rights and improve conditions by engaging in acts of resistance that challenge the status quo of the prison system.

In protracted conflicts, states use mass incarceration and detention to control the opposition and quell dissent. But prisoners also use prisons as spaces of resistance, thus changing the intended power dynamic.

Prison-based resistance, though most publicly manifest in hunger strikes, relies primarily on everyday actions that are out of the public eye. As my research in Palestine indicates, prisoners use subtle actions to challenge the power construct of the prisons and make the carceral space one of ongoing resistance and organizing, rather than one of control and discipline from the state.

Everyday resistance in Palestinian prisons, as in similar conflicts, includes establishing “counterorders,” developing political education curricula, and engaging in daily acts of noncompliance. Together, these everyday tactics contribute to a sustained repertoire of prison-based activism that helps prisoners maintain a sense of dignity, contributes to the gradual realization of rights, and provides a foundation for hunger strikes and broader advocacy.

The “counterorder” established by prisoners in the early 1970s was essentially a system of self-government in the prisons, including elected administrations, an education system, a shared financial system, and a communications system. The development of the nitham dakhili (“internal organization”) by prisoners was a form of everyday resistance in itself, and also proved imperative for fostering the unity, discipline, and coordination necessary to organize subsequent actions and strikes.

Furthermore, it enabled prisoners to transform their place in the prison regime from victims to agents. In addition to the central leadership committee, smaller committees were established at the cell and wing levels to coordinate day-to-day affairs and agendas, especially in the areas of academic study, economic/social relations, and communications. In 2014, Khawla, a female ex-prisoner, explained how the counterorder provided a structure to daily life that made the time in prison useful and productive.

Indeed, the “counterorder” established a daily routine as well as a foundational structure for resistance, creating a unifying sense of purpose and dignity.

Perhaps the most notable aspect of the counterorder was the education system, which provided prisoners with a foundation for critical thought and collective organising. Integrating process and content, the education system combined independent reading of progressive literature with political discussions and critical debates. As former-prisoner Issa explained in 2012,

Indeed, the knowledge gained through the curriculum, and perhaps more importantly, through the interactive learning processes, allowed prisoners to develop their own capacities while also providing a collective foundation for engaging in more direct forms of resistance.

Daily acts of non-cooperation or noncompliance, which challenged prison authorities over time, often led to a gradual realization of rights while also preparing prisoners for engaging in hunger strikes.

Individual and collective actions included refusal to work at assigned jobs, refusal to acknowledge prison guards, refusal to comply with counting and searching protocols, refusal of family or lawyer visits, refusal to shower or shave, refusal to leave the cell, and refusal of meals.  Actions were typically organized in response to specific policies. As ex-prisoner Nidal explained in 2012,

Similar actions included refusing to stand for the prisoner counts that took place three times a day, and refusing to address the guards as “my lord” or “my master,” as required in the early days in some prisons.

These gradual actions served several purposes. Primarily, they aimed to challenge specific policies, such as the strip searches or counting protocol. They were also useful however in sending a message to the prison authorities that the prisoners were willing to struggle and resist.

Finally, these types of actions served as a sort of practice or training for the “last resort” option of the extended hunger strike. Resistance in general gave practice in discipline and organization, while temporary refusal of meals specifically helped prepare prisoners physically and mentally for prolonged hunger strikes.

The Palestinian prisoners’ movement reflects how prisoners’ everyday acts of resistance, including the establishment of a counterorder, the development of a political education system, and day-to-day non-cooperation – in addition to hunger strikes – can be essential for maintaining a sense of agency, gaining rights, and transforming power relations within, and at times, beyond prisons in protracted conflicts.

Both within and beyond the Palestine case study, the repertoire of everyday prison-based tactics, including but not limited to hunger strikes, facilitates the subversion of the prison space and the disruption of intended power dynamics. In these ways, prisons in protracted conflicts often function as both epicentres of everyday resistance and anchors for broader activism.

Dr Julie Norman (@DrJulieNorman2) is a Teaching Fellow in the Department of Political Science at University College London (UCL). She is the author of three books on civil resistance, including Understanding Nonviolence (Polity 2015), and she publishes often on political imprisonment, human rights, and security. She is the host of the podcast, The Julie Norman Show, and she is a frequent contributor to the BBC, Al Jazeera, CNBC, France24, and other news outlets.

This story has been adapted from an article published in the Journal of Resistance Studies. To read the full text and other peer-reviewed articles on resistance, subscribe here.