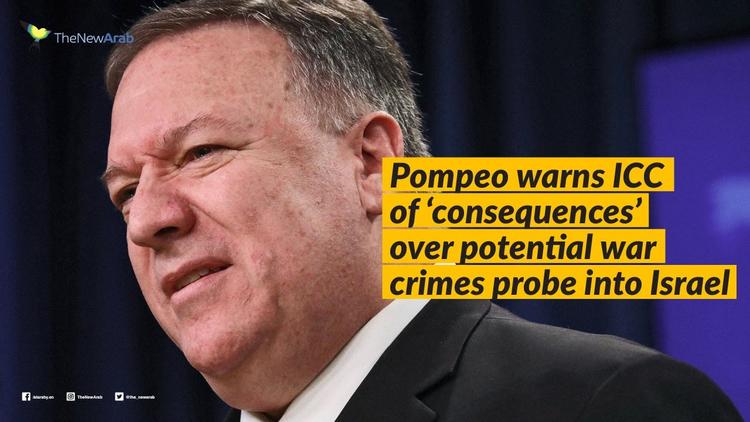 ( Middle East Monitor) – Since the International Criminal Court (ICC) determined that Palestine is a state for the purpose of its investigations into war crimes committed by Israel against Palestinian civilians, a fresh round of threats against the institution is taking place. US Secretary of State Mike Pompeo has warned of consequences based upon his government’s interpretation of what constitutes a Palestinian state. “The United States reiterates its longstanding objection to any illegitimate ICC investigations. If the ICC continues down its current course, we will exact consequences,” Pompeo said.

The US opposition to a Palestinian state has been further asserted through the so-called ‘deal of the century’, which pretends to advocate for a state while prioritising Israel’s colonial agenda; the latter leaving no possibility of any state-formation. US opposition to ICC investigations, therefore, is permanent.

Meanwhile, Israeli Prime Minister Benjamin Netanyahu has branded the possible forthcoming war crimes investigations as a “strategic threat”. Speaking during the first cabinet meeting, and claiming he rarely uses the word “strategic” although a common reference when it comes to Iran and the Boycott, Divestments and Sanctions Movement (BDS), Netanyahu declared: “This is a strategic threat to the State of Israel – to the IDF soldiers, to the commanders, to the ministers, to the governments, to everything.”

Israel has long played upon exceptions to maintain its colonisation of Palestine and further entrench its military occupation. US President Donald Trump has awarded Israel unprecedented impunity and normalisation of international law violations, to the point that, bolstered also by the international community’s tacit silence, Israel is politicising the ICC investigation with the aim of maintaining the state of exception.

The forthcoming investigations into Israel’s war crimes against the Palestinian people are not a strategic threat, but a belated response which might tarnish Israel’s image temporarily. Collusion with Israel on behalf of the international community is a major impediment – it must not be forgotten that internationally, Israel enjoys tacit support which allows it to build itself as a strategic threat against Palestinians.

Netanyahu’s rhetoric is a diversion. Israel is not being persecuted by the ICC; its officials face the possibility of being prosecuted for war crimes, which is the standard procedure. Israel’s violence sustains its colonial politics – one cannot exist without the other. Palestinians have faced this strategic threat for decades. Attempting to reverse roles in the face of war crimes evidence is a political manoeuvre which should backfire for Israel if the international community alters its pro-Israel bias and takes a stance in favour of decolonisation.