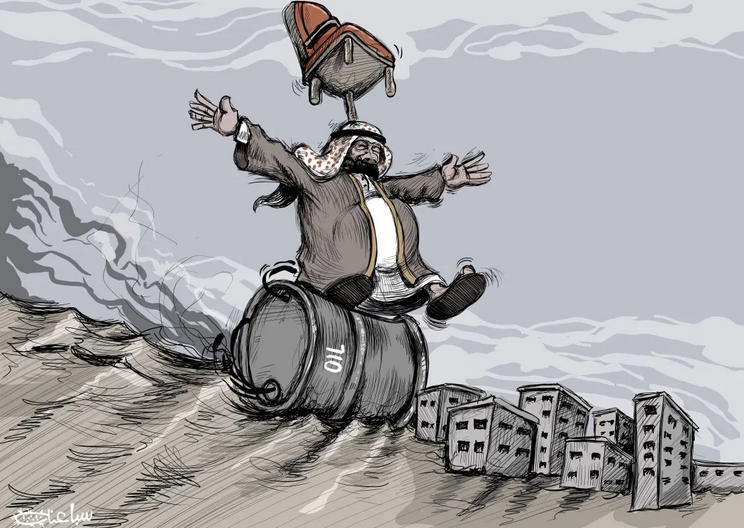 ( Middle East Monitor ) – On 6 March, the OPEC+ cartel failed to agree on a cut in oil production in the light of reduced demand due to the coronavirus pandemic affecting almost every country in the world. All of this came in the middle of a global financial crisis. Saudi Arabia proposed the cut, and OPEC members accepted it, but Russia, which is OPEC’s “+”, spearheaded the call to reject it.

“We have made this decision because no consensus has been found of how all the 24 countries should simultaneously react to the current situation,” Russian Energy Minister Alexander Novak told reporters after the OPEC+ meeting in Vienna. “So as from April 1, we are starting to work without minding the quotas or reductions which were in place earlier, but this does not mean that each country would not monitor and analyse market developments.” Hours later, oil prices plummeted.

In retaliation for Russia’s rejection of the production cut, Saudi Arabia “started the oil price war” by cutting prices the most for at least 20 years. Two days after OPEC’s break with Russia, Bloomberg reported that the energy giant Saudi Aramco was “offering unprecedented discounts in Asia, Europe and the US to entice refiners to use Saudi crude.” On 6 March, the price of a barrel of crude oil was trading in international markets at around $45.55; by 9 March, it was just $31.29 a barrel, and fell as much as 30 per cent at one point.

“This has turned into a scorched Earth approach by Saudi Arabia, in particular, to deal with the problem of chronic overproduction,” John Kilduff, founding partner of Again Capital, told CNBC. The Saudi-Russian oil price war continued until Brent crude traded at $15.97 a barrel on 22 April and West Texas Intermediate traded at minus $40 a barrel on 21 April.

The situation angered US President Donald Trump who was under pressure from American oil producers facing huge losses. He looked for ways to end the crisis, including the taboo of increasing prices in America.

Trump’s administration was ready to support an OPEC+ agreement to reduce output to boost prices, and he threatened to impose import tariffs on foreign crude to protect energy workers and domestic oil companies if no deal was reached. “I’ll do whatever I have to do,” said the US President. American companies and jobs have to be protected. However, imposing tariffs meant that he would make the oil exporters, including Saudi Arabia, bear the losses of the US oil companies and pay for the workers who lost their jobs. Trump insisted that he would have Russia and Saudi Arabia “destroy themselves” if they do not end the price war by reducing output.

Domestically, Saudi Arabia was damaged by its own policy of saturating the market with very low price oil which broke the basic supply and demand rule of economics. Aramco was classified by as the world’s most profitable oil company with a daily income of over $1 billion before the slump. A few days after flooding the market with oil, its market value “dropped to around $1.55 trillion,” reported Asia Times. That was bound to affect the Saudi government, which has no other real source of income.

Jordanian analyst Omar Ayasra told Al Jazeera that Saudi Arabia has lost billions due to its policy of saturating the oil market. He stressed that there would be a price to pay for this and the losses in the international markets and their consequences.

Last week, Bloomberg reported that Saudi Arabia “will rely on the biggest debt programme since its debut in international bond markets in 2016 to absorb the shock to the budget from collapsing energy prices and cuts in oil output.” According to Saudi Finance Minister Mohammed Al-Jadaan, “The government is looking at additional spending cuts and may issue as much as an extra 100 billion riyals of debt on top of 120 billion riyals already announced.” At the same time, Al Jazeera reported that the Kingdom has introduced austerity measures to help prop up the deficit.

Reuters reported on 29 April that, “Saudi Arabia’s central bank foreign reserves fell in March at their fastest rate in at least 20 years and to their lowest since 2011, while the Kingdom slipped into a $9 billion budget deficit in the first quarter as oil revenues collapsed.”

The former Qatari Energy Minister Abdullah Al-Atiyyah told Al Jazeera last week that Saudi Arabia ignored the supply and demand rule when it started its oil price war. The country would “weep” as a result, he predicted.

Although Saudi Arabia and Russia agreed to cut 23 per cent of their oil supplies in early April, equivalent to around 10 per cent of global supply, it has not yet had the desired effect. The Saudis are the bigger losers in this, because they lack other sources of income, while Russia has several alternatives, including gas. “Russia is in much better economic shape than Saudi to handle any shocks to its oil-related streams of revenue,” explained Oil Price.

Flooding the market with oil has backfired on Saudi Arabia. This suggests that de facto ruler Crown Prince Mohammad Bin Salman lacks the expertise and experience to handle such a crisis. Things are going to get a whole lot worse for him if Donald Trump goes ahead and basically scraps the 1945 deal which underpins the relationship between Saudi Arabia and the US and could see the US withdrawing its military protection of the Kingdom. If the US does withdraw its troops from Saudi Arabia, what will it do about Iran? If Aramco facilities are attacked and oil production is paralysed again, how will the Kingdom defend itself? Bin Salman has the future of the Kingdom in his hands.

Abdullah Al-Atiyyah believes that Saudi Arabia does not learn from its mistakes, so is destined to suffer more losses. It is unlikely to have many sympathisers apart from those foreign governments who have signed massive arms deals with the Kingdom. And possibly the supporters of Newcastle United Football Club, which its sovereign wealth fund is trying to buy for £300 million.

Moving from the rich list to the poorest list not only suggests that bankruptcy is a very real possibility, but also that Saudi Arabia is suffering from serious mismanagement at the very top. For a country blessed with such natural wealth, that is the real crying shame.