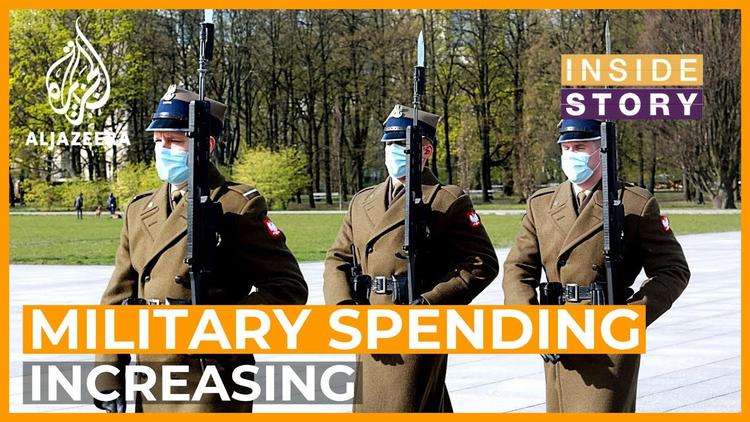 “There have been as many plagues as wars in history, yet plagues and wars take people equally by surprise.”

( Foreign Policy in Focus) – Camus’ novel of a lethal contagion in the North African city of Oran is filled with characters all too recognizable today: indifferent or incompetent officials, short sighted and selfish citizens, and lots of great courage. What not even Camus could imagine, however, is a society in the midst of a deadly epidemic pouring vast amounts of wealth into instruments of death.

Welcome to the world of the hypersonic weapons, devices that are not only superfluous, but which will almost certainly not work. They will, however, cost enormous amounts of money. At a time when countries across the globe are facing economic chaos, financial deficits, and unemployment at Great Depression levels, arms manufacturers are set to cash in big.

Hypersonic weapons are missiles that go five times faster than sound — 3,800 mph — although some reportedly can reach speeds of Mach 20, 15,000 mph. They come in two basic varieties. One is powered by a high-speed scramjet. The other, launched from a plane or missile, glides to its target. The idea behind the weapons is that their speed and maneuverability will make them virtually invulnerable to anti-missile systems.

Currently there is a hypersonic arms race going on among China, Russia, and the U.S., and, according to the Pentagon, the Americans are desperately trying to catch up with its two adversaries.

Truth is the first casualty in an arms race.

In the 1950s, it was the “bomber gap” between the Americans and the Soviets. In the 1960s, it was the “missile gap” between the two powers. Neither gap existed, but vast amounts of national treasure were nonetheless poured into long-range aircraft and thousands of intercontinental ballistic missiles (ICBMs). The enormous expenditures on those weapons, in turn, heightened tensions between the major powers and on at least three occasions came very close to touching off a nuclear war.

In the current hypersonic arms race, “hype” is the operational word. “The development of hypersonic weapons in the United States,” says physicist James Acton of the Carnegie Endowment for International Peace, “has been largely motivated by technology, not by strategy. In other words, technologists have decided to try and develop hypersonic weapons because it seems like they should be useful for something, not because there is a clearly defined mission need for them to fulfill.”

They have certainly been “useful” to Lockheed Martin, the largest arms manufacturer in the world. The company has already received $3.5 billion to develop the Advanced Hypersonic Weapon (Arrow) glide missile, and the scramjet-driven Falcon Hypersonic Technology Vehicle (Hacksaw) missile.

In theory hypersonic missiles are unstoppable. In real life, not so much.

The first problem is basic physics: speed in the atmosphere produces heat. High speed generates lots of it. ICBMs avoid this problem with a blunt nose cone that deflects the enormous heat of re-entering the atmosphere as the missile approaches its target. But it only has to endure heat for a short time because much of its flight is in frictionless low earth orbit.

Hypersonic missiles, however, stay in the atmosphere their entire flight. That is the whole idea. An ICBM follows a predictable ballistic curve, much like an inverted U and, in theory, can be intercepted. A missile traveling as fast as an ICBM but at low altitude, however, is much more difficult to spot or engage.

Without a heat deflecting nose cone, high-speed missiles are built like big needles, since they need to decrease the area exposed to the atmosphere. Even so, they are going to run very hot. And if they try to maneuver, that heat will increase. Since they can’t carry a large payload, they will have to be very accurate — but as a study by the Union of Concerned Scientists points out, that is “problematic.”

According to the Union, an object traveling Mach 5 for a period of time “slowly tears itself apart during the flight.” The heat is so great it creates a “plasma” around the craft that makes it difficult “to reference GPS or receive outside course correction commands.”

If the target is moving, as with an aircraft carrier or a mobile missile, it will be almost impossible to alter the weapon’s flight path to intercept it. And any external radar array would never survive the heat or else be so small that it would have very limited range. In short, you can’t get from here to there.

Lockheed Martin says the tests are going just fine, but then Lockheed Martin is the company that builds the F-35, a fifth generation stealth fighter that simply doesn’t work. It does, however, cost $1.5 trillion, the most expensive weapons system in U.S. history. The company has apparently dropped the scramjet engine because it tears itself apart, hardly a surprise.

The Russians and Chinese claim success with their hypersonic weapons and have even begun deploying them. But Pierre Sprey, a Pentagon designer associated with the two very successful aircraft — the F-16 and the A-10 — told defense analyst Andrew Cockburn that he is suspicious of the tests.

“I very much doubt those test birds would have reached the advertised range had they maneuvered unpredictably,” he told Cockburn. “More likely they were forced to fly a straight, predictable path. In which case hypersonics offer no advantage whatsoever over traditional ballistic missiles.”

While Russia, China, and the U.S. lead the field in the development of hypersonics, Britain, France, India, and Japan have joined the race too.

Why is everyone building them?

At least the Russians and the Chinese have a rationale. The Russians fear the U.S. anti-missile system might cancel out their ICBMs, so they want a missile that can maneuver. The Chinese would like to keep U.S. aircraft carriers away from their shores.

But anti-missile systems can be easily fooled by the use of cheap decoys, and the carriers are vulnerable to much more cost effective conventional weapons. In any case hypersonic missiles can’t do what they are advertised to do.

For the Americans, hypersonics are little more than a very expensive subsidy for the arms corporations. Making and deploying weapons that don’t work is nothing new. The F-35 is a case in point, but nevertheless, there have been many systems produced over the years that were deeply flawed.

The U.S. has spent over $200 billion on anti-missile systems, and once they come off the drawing boards, none of them work very well, if at all.

Probably the one that takes the prize is the Mark-28 tactical nuke, nicknamed the “Davy Crockett,” and its M-388 warhead. Because the M-388 was too delicate to be used in conventional artillery, it was fired from a recoil-less rife with a range of 2.5 miles. Problem: if the wind was blowing in the wrong direction, the Crockett cooked its three-man crew. It was only tested once and found to be “totally inaccurate.”

So, end of story? Not exactly. A total of 2,100 were produced and deployed, mostly in Europe.

While the official military budget is $738 billion, if one pulls all U.S. defense related spending together, the actual cost for taxpayers is $1.25 trillion a year, according to William Hartung of the Center for International Policy. Half that amount would go a long way toward providing not only adequate medical support during the Covid-19 crisis — it would also pay jobless Americans a salary.

Given that there are more than 31 million Americans now unemployed and the possibility that numerous small businesses — restaurants in particular — will never reopen, building and deploying a new generation of weapons is a luxury the U.S. and other countries cannot afford.

In the very near future, countries are going to have to choose whether they make guns or vaccines.

Al Jazeera English: “Why is worldwide military spending going up? | Inside Story”