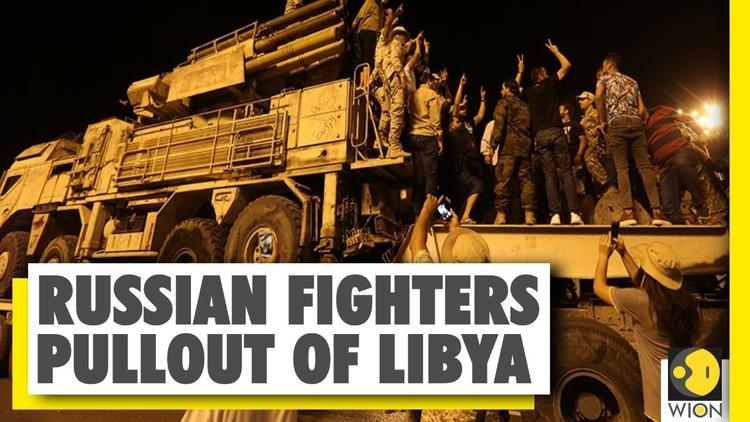 Belgrade (Special to Informed Comment) – Frenemies Russia and Turkey have put their conflict in Syria on hold, but they have intensified their rivalry in another proxy conflict. In Libya, clashes between Moscow-backed Libyan National Army (LNA) and Ankara-backed Government of National Accord (GNA) escalated, as the US Africa Command accused Kremlin of deploying military fighter aircraft to North African Country in order to support Russian state-sponsored private military contractors operating on the ground there.

After Russia-backed Field Marshal Khalifa Haftar’s Libyan National Army recently lost the Al-Watiya airbase west of the capital Tripoli, Russia reportedly sent six MiG-29s, as well as a pair of Su-24 Fencer combat jets to support him. At the same time, Russian Foreign Minister Sergei Lavrov and Turkish Foreign Minister Mevlut Cavusoglu backed an immediate ceasefire in Libya during a phone call. Given that none of the ceasefire agreements that Russia and Turkey made in Syria was ever fully implemented, it is very probable that the two sides will keep supplying their proxies in Libya with weapons, and the war will intensify with devastating outcomes. Even German Foreign Minister Heiko Maas admitted that previous calls for a ceasefire in Libya had had no effect.

“With great concern, we recognize that the call for a humanitarian ceasefire in Libya, particularly . . . in the holy month of Ramadan, has remained largely ineffective. Instead, we are still in an escalation spiral with ongoing fighting and further arms deliveries to both sides,” Maas said after holding a video conference call with foreign ministers of France, United Kingdom and Turkey.

Russian private military contractor Wagner Group has up to 1,200 people deployed in Libya to strengthen Haftar’s forces, according to a UN report.

For its part, according to LNA, Turkey has also become directly involved in the battle for Tripoli with its soldiers, planes, sea ships and all the supplies that now reach Misrata, Tripoli and Zuwara. Haftar recently said that “all Turkish positions and interests in all occupied cities will be targeted,” while Turkish Foreign Ministry spokesman Hami Aksoy warned that such an action would have “very grave consequences”. In reality, both sides in this conflict are already attacking each other’s positions on a daily basis and suffer heavily losses. Still, the two sides have very unequal positions. The Turkey-backed Government of National Accord in Tripoli currently controls a relatively small portion of the Libyan territory along the Mediterranean.

The Russia-backed Libyan National Army forces based in Benghazi still hold the majority of oil fields, as well as most gas facilities, and these fields may explain why Russia is investing its geopolitical resources in that country. According to some Russian analysts, energy and arms trade are the main reasons for Moscow’s involvement in Libya’s conflict. Before 2011, Moscow and Tripoli had deals on supply of Russian equipment and weapons, and Russian oil and gas companies Lukoil, Tatneft and Gazprom signed several agreements with the then-Libyan authorities.

Because of the civil war in the North African nation since 2014, the Russian energy giants suspended their operations in the country, although recently Tatneft resumed seismic acquisition activities in the Hamada basin. When it comes to gas, there are Russian authors who claim that the Kremlin aims to prevent Turkey from implementing the maritime border delineation deal with Libya, as that way Ankara would be able to extract natural gas directly from the Mediterranean Sea, instead of buying it from Moscow.

On the subject of weapons, it is worth remembering that most Libyan officers, including Haftar, were trained in the former Soviet Union, and total arms deliveries to Libya during the Soviet era are estimated at $20 billion. That is why Russian analysts point out that Moscow’s interests in Libya are both economic and geopolitical. Since Turkish interests in the North African country are diametrically opposed to Russian ambitions in the region, Shamil Sultanov, the head of Russia’s center for the Middle East studies, warned that the two countries could eventually start a confrontation over Libya. Even though he admitted that Moscow and Ankara can reach a compromise, the problem for Kremlin is that, besides Turkey, other major players such as France, Egypt, the United Arab Emirates, Saudi Arabia, Jordan and Greece are also involved in this geopolitical game.

Haftar is not backed only by Moscow, but by Cairo and Abu Dhabi as well, which further complicates very complex situation in the North African country. Even if Russia and Turkey manage to announce a temporary truce, it will most likely be used by LNA and GNA to accumulate new stockpiles of weapons for the next stage of the war. Also, in that case, the airstrikes are expected to be intensified, as well as fierce battles between air defense systems and shock drones in certain sections of the front. However, if Moscow and Ankara fail to implement a ceasefire, GNA forces will likely attempt to capture even more bases and territories from LNA, while Haftar’s forces are expected to intensify air raids on Misurata and Tripoli.

In any case, the conflict in Libya will not be over any time soon. Following the killing of the Libyan leader Muammar Gaddafi in the West-backed uprising in late 2011, the country has been mired in two distinct rounds of civil war with various Libyan factions serving as proxies for regional and international players, each trying to secure its own interests. Libya is a nation rich in oil and gas reserves and borders important Mediterranean trade routes. Russia and Turkey both covet those resources and the power in Eastern Mediterranean politics they promise. The proxy wars over the future of Libya have likely only just begun.

WION: “Russian fighters flown out of Libya after retreat of Haftar militia”