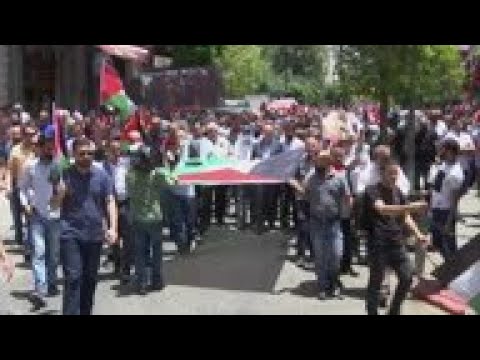 ( Middle East Monitor )- On Saturday, it was revealed that Israeli media are reporting fake news in order to market Prime Minister Benjamin Netanyahu’s annexation plan to the Palestinians. Such reports have been published by leading media outlets, including Yedioth Ahronoth, one of Israel’s bestselling newspapers. According to Israeli affairs specialist Abdul Aziz Salha, the Israeli media have been trying to shape public opinion in the occupied Palestinian territories about annexation.

Several days ago, for example, Yedioth Ahronoth reported that “poor” Palestinian people living in isolated villages in the Jordan Valley — part of the occupied West Bank targeted by the annexation plan — were saying that they would be happy with the government’s move because of the expected economic boost that it will bring. That is what is being claimed by the Israeli occupation authorities.

Salha described this report as fake to the extent that he is not sure if the people quoted in the story are Palestinians or not. “Like the settlers,” he explained, “the Israeli journalist who prepared this report wants to get the annexation plan implemented. It is not a neutral position.”

Apart from such fake news, Rapoport added, these Israeli journalists are reporting the discontent among Palestinians in the occupied West Bank towards the Palestinian Authority. The way that the stories are slanted is that the Palestinians who criticise the PA are expressing their preference for Israeli domination. He referred specifically to a report by television journalist Zvika Yehezkeli, the Arab affairs correspondent and head of the Arab desk at Israeli News 10.

“The message is that many Palestinians in the occupied West Bank are fed up with the PA, so they speak openly against it. The support among the Palestinians for the ‘one-state’ solution is also interpreted as support for the continuation of Israeli rule.”

At the end of last week, Yehezkeli used a hidden camera — he claimed that they do not speak the truth otherwise — to record Palestinians speaking about their “support” for annexation. They look forward, we are led to believe, to the employment opportunities and better living conditions.

Journalism is supposed to be based upon principles and ethics, neither of which appear to bother Israeli media and journalists in this particular case; too many are far from being objective and credible in their reporting. Annexation is simply an extension of Israel’s occupation and colonisation of historic Palestine, so it is no wonder that its supporters are using every dirty trick in the media book to cover the real objectives which, as Salha says, certainly do not have the interests of the Palestinians at heart.