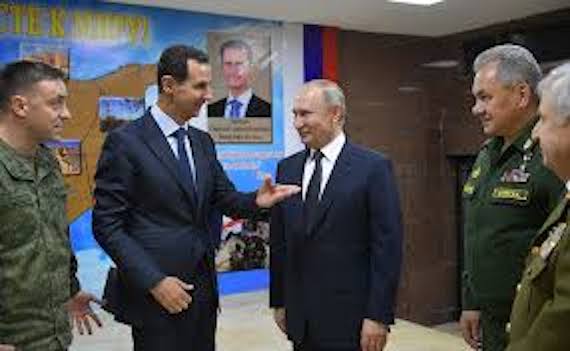 ( Middle East Monitor) – On this day, 17 June 2020, America’s Caesar Syrian Civilian Protection Act of 2019 (also known as the Caesar Act) takes effect. The act, which was passed by the US Senate in December 2019, requires the US President to impose sanctions on members and allies of the Syrian regime, including Iran and Russia. The intention is to exert pressure on Syrian President Bashar Al-Assad and his affiliates to end the devastating nine-year civil war.

What: The Caesar Act

In August 2013, a military defector, known by the pseudonym “Caesar”, sent and smuggled more than 50,000 photographs out of Syria, including 28,707 harrowing images documenting deaths in government custody. Caesar was a military forensic photographer in Damascus who took and archived thousands of these images. Some of the pictures, which were later displayed in the US Holocaust Memorial Museum, the UN headquarters in New York, the European Parliament in Brussels and the Houses of Parliament in Westminster, show emaciated victims, some with holes where eyes had been gouged out, others with limbs torn out of sockets, and many with visible signs of blunt force trauma.

Caesar testified in front of the US House Foreign Affairs Committee in July 2014. He showed investigators some of the images and called on the US government to take action against the Syrian regime to protect the tens of thousands of civilians held in the regime’s prisons. Fox News quoted Caesar as saying during his testimony, “No one here can bring their lives back to them but I am here to tell you there are 150,000 people still incarcerated… their fate will be the same fate as those I’ve taken pictures of.”

The pictures, and a 2014 report (known as the Caesar Report) claiming to detail the systematic killing of detainees by the government, sparked a Human Rights Watch (HRW) investigation into the veracity of the images and the allegations of systematic torture which surfaced as a result. The HRW report, published in December 2015 under the title “If the Dead Could Speak”, verified the authenticity of some of the photos and identified the number of documented cases, the victims and the most common causes of death.

The Caesar Act, drafted as a result of Caesar’s testimony, was first introduced in 2016 by Representative Eliot Engel of New York who, along with the then Chairman of the House Foreign Affairs Committee, Ed Royce, helped to arrange the Syrian military defector’s testimony and to write the bill. Initially, the legislation faced opposition from the Obama administration, which argued that it could damage the US government’s diplomatic capabilities. Nevertheless, the Caesar Act was passed by lawmakers in November 2016, despite White House resistance.

In the Senate, however, the legislation faced continued resistance as a stand-alone Act, resulting in its inclusion in the National Defence Authorisation Act for Fiscal Year 2020 (NDDA). The Caesar Act, as part of the NDDA, was finally passed by the Senate on 17 December 2019 and signed into law by Donald Trump a few days later. The legislation included a six-month deadline for imposing sanctions, ending today.

From today, sanctions will be imposed on Syrian government officials, including President Bashar Al-Assad, and foreigners who provide support to the regime, or are implicated in human rights abuses and war crimes committed against the population.

The bill also targets companies worldwide that do business with the Syrian regime, specifically those which sell aircraft equipment which is later used by the state military; provide construction and engineering services to the government; or facilitate the maintenance or expansion of natural gas or petroleum production.

According to the legislation, people who fall into these categories will have property assets in the US frozen and will be banned from receiving or holding a visa for the US.

The sanctions exclude the Rojava region in north-east Syria, known as the Autonomous Administration of North and East Syria.

Sanctions must be imposed for five years under the legislation but can be lifted provided six requirements are met. These are: an end to Syrian and Russian aerial bombing campaigns which target civilians, hospitals, schools and markets; removal of restrictions on humanitarian aid to remote and besieged zones; the release of all political prisoners, with human rights organisations given access to detention centres and jails; the right of return for displaced Syrians; and the fair trial of officials implicated in war crimes cases.