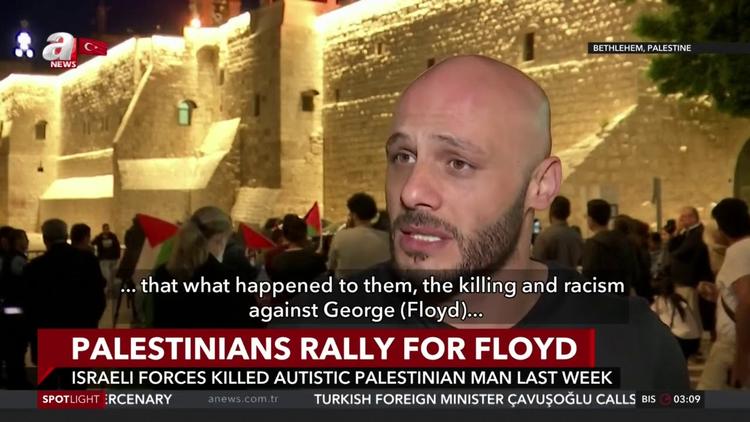 Floyd’s death sparked an outpouring of public anger about racially-motivated police brutality, triggering calls for the defunding of police departments in America and reforming school curriculums to include colonial history.

( Middle East Monitor ) – “[Palestinians] go through the same struggle, so I understand the pain, and there’s nothing more painful than when it’s happening, and no-one is talking about it and no-one is doing anything about it,” she tells me. Indeed, Mira points out that there are striking parallels between the plight of black people in the US and Palestinians living in occupied Jerusalem. Only last week, a 32-year-old autistic man, Eyad Hallaq, was shot dead by Israeli police in East Jerusalem. The officers who shot Hallaq twice in the chest claimed that they thought his phone was a gun. They shot him despite his carer explaining that he had special needs.

It is this kind of ingrained racism, says David Ejamel, a British-Israeli who was raised in Jerusalem, which made him want to attend the BLM protests in London. “I grew up in a violent city, I grew up in Jerusalem, I’ve seen first-hand how hatred hurts people and we see it every day… we’re currently living in a society that has systemic racism and people who aren’t willing to acknowledge the fact that racism, classism… homophobia… are versions of the same thing, which is hatred, which no longer has a place in society.”

David and Mira see themselves as allies of the BLM movement and say they are protesting in solidarity. British-Sudanese sisters Khadija and Mchaira Abdelhamid, however, say that they feel part of the BLM movement. “Black is black at the end of the day,” says Khadija.

Both sisters wear hijab and have experienced racism and discrimination in Britain. According to Khadija, when she wears a backpack on public transport, other passengers frequently move away from her.

Although born in London, Mchaira has been told that she is an immigrant and does not deserve to live in Britain. “I don’t understand why people still think that because we are black, we are immigrants who don’t deserve to be here. It’s a stupid ideology.”

Aous Hammoud, a Syrian refugee living in London who will become British next year, tells me that he has had similar experiences in Europe. In Leipzig for the Christmas markets, for example, he ordered a beer when another customer shouted at him, “Whoa, whoa, please don’t kill me.”

The BLM protests are an opportunity to use his voice for change, he insists. “It’s a platform to shout out [about] everything that’s happening around the world… everyone is trying to change this life that we are living… I feel like we need equality and we need to love each other.”

His placard reads “1 = 1”. The meaning is simple: “One person equals one person no matter what we are, no matter how we look, we are one.”

British-Algerian Sarah Daoud, however, says that while she agrees with this sentiment, she is attending the protests because previous marches and activism have failed to bring about change. “I think people need to catch this moment and do something with it because so many people have died before him [George Floyd]… there have been marches and still nothing’s being done.”

For Sarah, who stands in silence, visibility is the key. Simply being present during the protests demonstrates solidarity with the movement. Her friend, Pakistani-born, Saudi-raised Hafsa Soied, however, adds her voice to the chorus of “Say his name. George Floyd!” and she’s crying. “I will never, ever be able to understand what they feel, but I will be able to feel the injustice of the world and that is what makes me cry, not their pain because I don’t know it but, the pain of the ignorance.”

Hafsa explains that the protests have created a sense of solidarity not only across the world, but also among minorities who experience racism every day. She says it’s important to see people from all over the world joining protests in the city they all call home. “We’re here in the memory of George Floyd and all those who have been wronged by the system and… treated [inhumanly] in the name of absolutely nothing but white supremacy.”

As the rain starts to pour in Westminster’s Parliament Square, Mchaira Abdelhamid sums up the movement deftly. “Even in the rain we’ve all come here together in solidarity and unity… in unity we stand and divided we fall.”

Lauren Lewis is a writer and journalist based in London, who has previously reported for the Daily Star Lebanon and Al-Arabiya English from Beirut. She focuses on Lebanon, with a particular interest in the rest of the Levant and Central Asia.