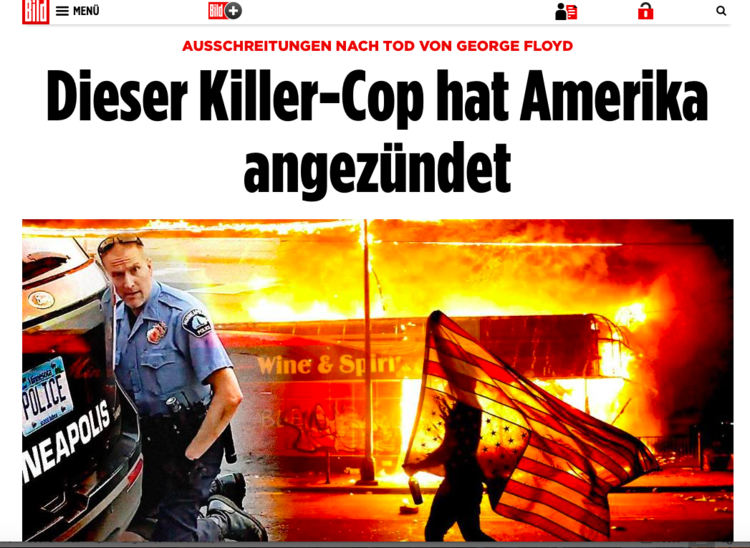 The United States is paying the price for denying people what Malcolm X called ‘the right to be a human being.’

(48hills.org) – One of Germany’s largest dailies ran the headline “This killer cop set America ablaze,” with a photo of the Minneapolis police officer who killed George Floyd. Protests in the United States, the article reported, looked like “scenes out of a civil war.”

Bettina Gaus, political correspondent for the Berlin daily Die Tagezeitung, tells me that everybody in Germany, “regardless of political affiliations, is appalled by the murder of George Floyd and sees it as just another example for racism in the US And nobody thinks Donald Trump is helpful.”

In another part of the world, Palestinians and some Israelis recognize that both US and Israeli security forces regularly shoot unarmed civilians. On May 30, Iyad Halak, a Palestinian student with autism, was murdered by Israeli soldiers claiming he had a gun. No weapons were found, and former General Benny Gantz later apologized.

As victims of America’s long history of supporting violence, Palestinians have expressed solidarity with US demonstrators. “The growing protests . . . against police brutality in the U.S. are fundamentally an uprising against an entire system of racist exploitation and oppression,” read a statement issued by the BDS (Boycott, Divestment, and Sanctions) movement in Palestine.

While President Donald Trump’s White House, many US politicians, and the corporate media condemn the protests as riots, much of the rest of the world sees them as uprisings. Ajamu Baraka, founder of the

The US government and corporate media “cheer on demonstrators in Hong Kong, regardless of the level of violence and property damage,” Baraka tells me. He adds that the worst looting took place when the government “transferred billions of public resources into banks and corporations under guise of helping the economy during the COVID-19 crisis.”

Bill Fletcher, executive editor of GlobalAfricanWorker.com and former president of TransAfrica Forum, notes that the vast majority of protests against police killings have not engaged in violence or looting.

“I’m sure there are opportunists out there who just loot and provoke,” he says. “But there are also very frustrated people.”

Spontaneous demonstrations have broken out in more than 140 American cities in the largest US uprising since the assassination of Martin Luther King Jr. in 1968. But this time African Americans have been joined by white, Asian, and Latinx protesters.

The Black liberation movement has a long history of solidarity with the Third World. Some of today’s protesters, particularly whites, may not be familiar with that history and its lessons for today.

Solidarity with the colonized

African American historian and political activist W.E.B. Du Bois travelled to the Versailles peace talks after World War I to express solidarity with colonized Africans. Britain, France, and the United States had promised democracy and self determination following the war. Instead, the victorious imperialist powers carved up Africa, Asia, and the Middle East into colonies under their control.

“Self determination didn’t apply in the colonial world,” says Fletcher.

During the 1920s and 1930s, leftist and nationalist movements developed in the Black community. Marcus Garvey led a massive Back to Africa movement. The Communist Party and other leftists gathered considerable support by organizing non-segregated trade unions and defending African Americans against police brutality.

African Americans strongly opposed Italy’s 1935 invasion and occupation of Ethiopia, and joined the fight against fascism.

Activists from that era came to understand that African Americans are “not only exploited as workers but are a colonized people,” Baraka says. “The source of their oppression was the colonialist, capitalist system. So they had a common interest with other anti-colonial struggles.”

By the 1950s, African Americans and liberal whites had joined together in the civil rights movement demanding an end to segregation in education, housing, and employment. But leaders such as Malcolm X, particularly in the last year of his life, said demanding civil rights was not enough.

By calling for human rights, says Fletcher, Malcolm X “meant that our struggle was not simply a struggle for constitutional rights but for political power and self-determination. It was a struggle for other people in the Global South. US Blacks are fighting the same system.”

Malcolm X questioned the way US society was organized, according to Baraka, “not just what’s in the heads of individual white people, but the structure and logic of white supremacist domination.”

It was an analysis that would prove prescient.

US officials, whether Democrat or Republican, pretend that only other countries violate human rights. Every year, the State Department issues a report on worldwide human rights with the heaviest criticism aimed at enemies du joursuch as China, Russia, and Iran.

Human rights, as defined by US officials, include freedom of the press, maintaining an independent judiciary, and civil rights. But most of the world, the United Nations included, goes further, saying human rights include the right to a job, health care, and housing, among other things.

“The persistence of extreme poverty is a political choice made by those in power,” the report stated. “With political will, it could readily be eliminated.”

The Trump Administration finds itself increasingly isolated at home and abroad. The United States has the world’s highest death count from COVID-19 and faces a massive recession.

But Trump is not deterred. He uses the issue of “violent demonstrators” to proclaim himself “the president of law and order.”

Progressives see large demonstrations in front of the White House as a call for freedom and democracy. Trump supporters see radicals and anarchists attacking the U.S. government.

I worry that Trump could mobilize his supporters to provoke a race war. Or these multiple crises could lead to Trump’s removal from power.

Baraka, for his part, does not foresee a return to normal in the months ahead.

“There’s never been a period like this,” he says. “This is one of the most serious and dangerous moments in the history of this country.”