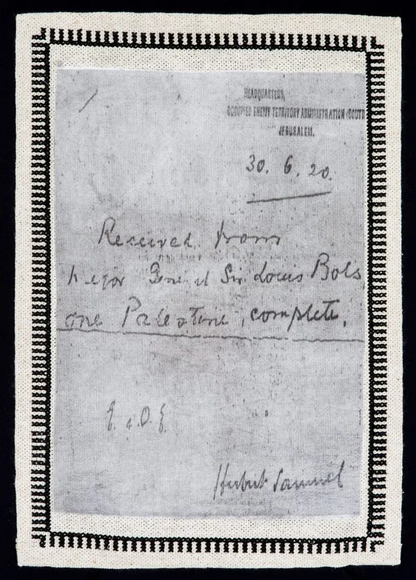 On this day in 1920, the first High Commissioner for Palestine Herbert Samuel, was handed the administration of the country by the British government and signed a receipt saying “one Palestine, complete”

On this day in 1920, the first High Commissioner for Palestine, 1st Viscount Samuel, Herbert Samuel, was handed the administration of the country by the British government and signed a receipt acknowledging that he had received “one Palestine, complete”. It was still another three years before the Mandate for Palestine granted to Britain by the League of Nations came into effect.

What: Receipt of “one Palestine, complete”

Who was Herbert Samuel?

The Liberal politician was the first nominally-practising Jew to serve as a cabinet minister and lead a major political party in Britain. Though not a member of the World Zionist Organisation himself, while Liberal Home Secretary in 1914 Samuel obtained the organisation’s latest publications. Not long after, he found himself campaigning for a Jewish national home in Palestine and “co-operating closely”’, as he wrote in his memoirs, with Zionist leaders to further their cause.

With the outbreak of World War One, Samuel’s involvement with Zionism grew exponentially. In 1915, he proposed the idea of establishing a British protectorate over Palestine after the war and argued for a homeland in the region for the Jews, who had waited for “over eighteen hundred years” to return [sic] to Palestine, a land to which their connection, he said, was “almost as ancient as history itself”. Palestine at the time formed part of the Ottoman Empire, with a majority Muslim indigenous population, having been under Muslim rule for centuries.

“Let a Jewish centre be established in Palestine,” Samuel urged in a cabinet memorandum that he drafted. “Let it achieve, as it may well achieve, some measure of spiritual and intellectual greatness, and insensibly the character of the individual Jew, wherever he might be, would be raised. The sordid associations which have attached to the Jewish name would be, to some degree at least, sloughed off, and the value of the Jews as an element in the civilisation of the European peoples would be enhanced.”

Samuel’s ideas increased the British government’s pro-Zionist orientation and paved the way for the 1917 Balfour Declaration, in which the British Foreign Secretary declared the government’s support for the establishment of “a national home for the Jewish people” in Palestine.

The Ottomans entered World War One in November 1914 on the side of the Central Powers, and the Ottoman Empire was dissolved in 1921 after their defeat. A mandate for the administration of the territories of Palestine was assigned to Britain by the League of Nations and came into effect on 29 September 1923.

In a series of letters exchanged during the war — known as the McMahon-Hussein Correspondence — the British government agreed to recognise and honour Arab independence after the war if the Arabs rose up against the Ottoman Empire. After the war, however, Britain and France divided up and occupied former Ottoman territory as agreed under the 1916 Sykes-Picot Agreement and accepted the mandate system to govern Palestine. This was seen as a betrayal by the Arabs.

Embroidered panel displaying a receipt by the first High Commissioner to the Palestine Mandate acknowledging he had received ‘one Palestine, complete’. [Courtesy of the Palestinian History Tapestry].

Viscount Samuel was appointed as the first High Commissioner for Palestine by British Prime Minister David Lloyd George. On 30 June 1920, he signed a receipt (complete with “E&amp;OE” – Errors and Omissions Excepted) addressed to him by the head of the British military administration in Palestine, Major General Sir Louis Bols, acknowledging that he had received “one Palestine, complete”. The receipt marked the handover of the land of Palestine from military to civilian administration.

In the eyes of Palestine’s indigenous population who were seeking their own independence and right of self-determination, Britain had handed over the territory to settler-colonial Zionists backed by Samuel, who governed the land until 1925. The people of Palestine had not been consulted about any of this.

According to Samuel in a speech that he delivered in Jerusalem in June 1921, the words of the Balfour Declaration, “Mean that the Jews, a people who are scattered throughout the world, but whose hearts are always turned to Palestine, should be enabled to found here their home; and that some among them, within the limits which are fixed by the numbers and interests of the present population, should come to Palestine in order to help by their resources and efforts to develop the country to the advantage of all its inhabitants.”

Two months later, in a report reviewing his first year as High Commissioner, Samuel said that Zionists “sometimes forget or ignore the present inhabitants of Palestine… many of whom hold, and hold strongly, very different views.”

Britain’s policy of facilitating Jewish immigration to Palestine with the stated goal of establishing a Jewish national home, and the disregard for the indigenous population and their national aspirations, resulted in the Great Revolt of 1936, a nationalist uprising by the Palestinians against the British administration, and Jewish insurgency in Mandatory Palestine.

Britain decided to end its mandate in Palestine on 15 May 1948. David Ben-Gurion, the Executive Head of the World Zionist Organisation at the time and later the first Prime Minister of Israel, read the “Declaration of Independence” establishing the State of Israel one day before the mandate ended.

Zionist militias and terrorist gangs had already been committing atrocities against the people of Palestine and, indeed, the British authorities, leading to around 750,000 Palestinians being forced out of the nascent state. More than 400 Palestinian villages and towns were depopulated and destroyed; this figure now exceeds 530. This “ethnic cleansing” came to be known as the Palestinian Nakba, the Catastrophe. Despite its membership of the United Nations being conditional upon Israel allowing Palestinian refugees to return to their homes and claiming their property, the first government in Tel Aviv passed a series of laws banning them from doing so. In the three years from May 1948 to the end of 1951, some 700,000 Jews settled in the new state.

Israel continues to ignore the legitimate right of return as established by UN Resolution 194 in 1948 and reaffirmed every year since. It was also mentioned specifically as an “inalienable right” by UN Resolution 3236 in 1974.

Less than two decades after the Nakba, in 1967, Israel occupied the West Bank and the Gaza Strip during the Six Day War and started constructing illegal settlements across the occupied Palestinian territories. Contrary to the Zionist narrative, Israel actually started hostilities by bombing and destroying the Egyptian Air Force on the ground.

Today, Israel continues to exercise military control over Palestinians in the occupied territories, and there are now an estimated 6.5 million refugees and their descendants.

Marking 100 years since the handover of Palestine, the receipt signed by Herbert Samuel for “one Palestine, complete” has been included in a panel on the Palestinian History Tapestry, which tells the story of the indigenous people of Palestine through skilled, traditional Palestinian embroidery.

“The real lesson of the story of ‘one Palestine, complete’,” says Palestinian author and patron of the Tapestry project Dr Ghada Karmi, “is the light it throws on Zionism’s influence over the development of British policy, as early as 1920.”

Such influence continues to this day, arguably more than ever.

Jehan Alfarra is a Palestinian writer and multimedia journalist covering Middle Eastern affairs and specialising in Palestinian political news and social issues. She is also a contributing author to the book “Gaza Writes Back”.