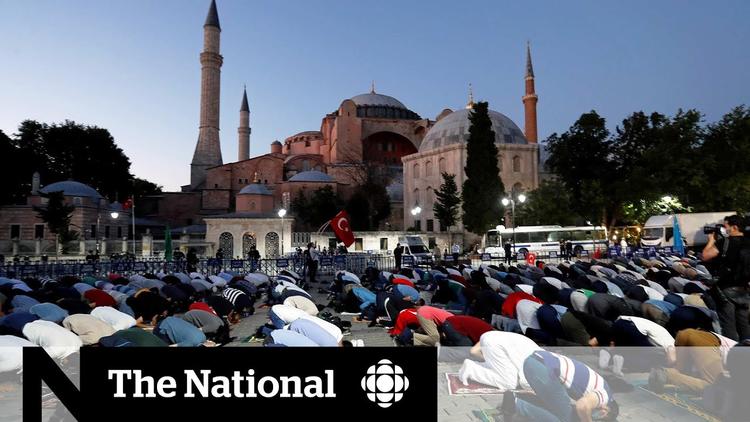 (Special to Informed Comment) – Debates are currently going on regarding the destiny of the Hagia Sophia (literally “Divine Wisdom”, the sixth-century cathedral built by Eastern Roman emperor Justinian) in Istanbul. President Erdogan made a kicked off this dispute with his declaration a few days ago allowing Muslims to pray at the venue. This wide-ranging debate is a positive development because it raises important issues that relate not just to the Turkish government and society and the Eastern Orthodox Church; it concerns civilizational relationships – a phenomenon that dominates politics and international relations today. Many thought provoking ideas have emerged both at popular and academic circles on the subject. I think it is important that we engage in this exercise and try to get the best out of it.

People with different orientations are responding to this announcement differently. Some are reacting against modern Turkey’s founding father Mustafa Kemal Ataturk’s 1935 decision to convert the facility to a museum. Many from this same group of people seem to be concerned about the honor and respect for Sultan Mehmet II, the Conqueror, who took Constantinople in 1453, who is reported to have been praised in the hadith that predicted the liberation of Constantinople. Another group appears to be motivated by Turkey’s glorious past and for them the Sultan had made significant contribution to build Turkey’s global image and any action that undermines Sultan Mehmet’s legacy would harm this image. Meanwhile the Turkish apex court has come forward with a judgement that the 1935 decision to change the status from a place of worship to a museum as illegal and therefore returning the facility to worshipers would be the only right action to take.

Our question here, however, is whether the Sultan made a mistake by converting the functioning church to a mosque and whether we must – the later generations – approve all actions of our heroes irrespective of their validity and consequences. In my humble opinion, it was a mistake on the part of the Sultan to convert the venue to a mosque. In this context, one must keep in mind that committing mistakes is human and our father Prophet Adam (on whom be peace) committed a mistake in the beginning of human history. In the current milieu, one should remember an event during the liberation of Makkah under the leadership of Prophet Muhammad (peace be upon him). Following the liberation ‘Abbas, the prophet’s uncle, demanded the key of the Ka‘ba from the clan Bani ‘Abd ad-Dar who were not yet Muslim. The Prophet granted the request. Immediately the Prophet received the verse “Allah commands you to deliver trusts to those worthy of them; and when you judge between people, judge with justice. Excellent is the admonition Allah gives you. Allah is All-Hearing, All-Seeing (4: 58).” The Prophet understood the implication and instantaneously returned the key back to ‘Uthman ibn Abi Talha and his cousin Shaybah ibn ‘Uthman, the two representative figures of Bani ‘Abd ad-Dar. The rationale behind this act seems to have been that the clan was traditionally maintaining the trust of the people with the key and had been providing the necessary services to pilgrims, and therefore there was no need to deprive them of the charge. The Prophet received guidance from the Creator because he was in direct touch with Him, but for followers the mechanism is, as has been suggested in the Qur’an, is to counsel one another (103: 3). Therefore, the followers of the Qur’an must analyze ideas and events to counsel and correct one another’s mistake even though centuries might have passed.

One should also look at the prophetic teachings about treatment of non-Muslims. The Prophet in his covenant with the Christians of Najran pledged: “I commit myself to support them, to place their persons under my protection, as well as their churches, chapels, oratories, the monasteries of their monks, the residences of their anchorites, wherever they are found, … Nor is it permitted to destroy any part of their churches, to take parts of their buildings to construct mosques or the homes of Muslims.” He extended similar covenant to other Christian communities living in other areas of Arabia. Following the prophetic tradition the second caliph ‘Umar (may God be pleased with him) extended similar pledge to non-Muslim communities in Jerusalem when it came under Muslim rule.

Ideally, Sultan Mehmet II should have extended similar treaty to the Orthodox Church when he liberated Constantinople in 1453, but circumstances at the time were different. Indeed the Sultan seems to have taken the action in accordance to demands of his time. Muslim places of worship at the time were being confiscated and converted to churches and other miscellaneous treatments in the Iberian Peninsula. In addition, one should note that at this time there was no Muslim places of worship in Istanbul. The Fatih Sultan Mehmed Mosque which is located about four kilometer away from Hagia Sophia, came about decade and a half later, the Suleymaniye mosque, which is over three kilometer away, came more than a century later. The Sultan Ahmet Mosque next door to Hagia Sophia was founded in 1617, more than century and a half later. Therefore, there was a genuine need for Muslim place of worship in the city. However, circumstances have changed in the 21st century, no mosque is being converted to church in Spain these days, and the need for prayer space for Muslims in Istanbul does not apply any more. In fact, churches in many western countries have now opened their doors to Muslims for worship. Therefore, it is only proper for the Turkish government to reconsider the whole situation in the light of changed circumstances.

Questions are being raised about the legal implications of wars of conquest – what happens when wars end – how should victorious parties treat defeated parties? What happens to properties of the subjugated? Should one treat places of worship differently from other properties? Some apologetics have come forward with a document suggesting that the Sultan purchased the property where Hagia Sophia is located from priests who were responsible for it. Argument has also been put forward that the venue was vandalized by Catholics in one of the Crusades and was not being used for religious purposes when the Sultan liberated the city, and therefore the Sultan was absolutely justified to restore the facility to a place of worship. However, in our view, Hagia Sophia should not be compared with any normal place of worship. In fact, the abode is reported to have been a place of worship for centuries before the Byzantine Emperor Justinian I had built what he called Hagia Sophia or the House of Divine Wisdom. One should ignore occasional lawlessness in such places. Could we not maintain the same status for which it was built? If the Prophet of God could afford to trust a non-Muslim clan to administer the key to the Ka’ba, who are we to deny key to the house of Divine Wisdom to its original holder? However, handing over Hagia Sophia to the Orthodox Church could happen only in an ideal world and we hardly live in an ideal realm.

In a world mired by the clash of civilizations thesis, the United Nations Alliance of Civilizations (UNAOC) seems to be a good platform to initiate any such discussion. In order to reduce world tension the Spanish Prime Minister José Luis Rodríguez Zapatero called for an alliance of civilizations at the United Nations General Assembly in 2004 and the Turkish Prime Minister Recep Tayyip Erdogan came forward to co-sponsor it. Although the institution began its journey for conflict resolution in 2005 with the blessings of the UN Secretary General with a lot of enthusiasm, with the passage of time it seems to have lost excitement. In an atmosphere of nation-state sovereignty, it is always difficult for international organizations such as UNAOC to make an impact in international politics. This is particularly true for nations such as Spain and Turkey, which do not have veto power in the United Nation Security Council. Yet for Spain and Turkey to come forward in order to address a crisis created in the name of clash of civilizations. Keeping in view Spain’s past record, it was a great gesture on the part of the Spanish government to come forward not only with the proposal of an alliance of civilizations, Spain also withdrew its troops from Iraq at a time when many Muslims had become victim of the so-called War on Terror. Perhaps that is why Turkey came forward to co-sponsor the Spanish proposal. However, circumstances have changed over the past decade or so. Mr. Zapatero is no more in power and Spain does not seem to be following the alliance of civilizations agenda actively any more.

If the Turkish people were to be convinced in returning Hagia Sophia to Christians, they would like to see the return of mosques that were converted to churches and other facilities in the 14th and 15th centuries in Spain back to Muslim hands. In other words, both Spain and the Catholic Church will have to revise their history and correct their mistakes. Pope Francis has expressed his “pain” and the Ecumenical Patriarch Bartholomew has expressed that he has been “saddened and shaken” at Turkey’s decision on Hagia Sophia but, in our opinion, both must do more to earn respect and trust of Muslims. The UNESCO too must do more to help Muslims regain their civilizational heritage in Spain. As for the government in Turkey, it too does not seem to enjoy the same higher moral ground that it had enjoyed in 2005 to impress the Spanish government. Mr. Erdogan’s AK Party has slowly centralized power through a new presidential system. In addition, the cordial relationship Turkey had developed with neighboring countries, particularly with Greece and Armenia during first decade in power, does not seem to be continuing any more. These are not good signs for gaining trust either nationally or internationally.

In our view, Hagia Sophia issue has the potential to not only revive the moribund institution and rekindle its mission and vision; it has the potential to generate trust among all world civilizations. It is always difficult to relate ideals with realities. The Hagia Sophia issue principally demands spiritual consideration. Both political and religious leaders should put their hands on their heart and think what Mawlana Rumi would have done in this situation. My faith tells me that not only Rumi, Sultan Mehmed II too would now have been pleased if a decision on the matter were made based on Divine Wisdom.

CBC News: “Turkey’s Hagia Sophia turned back into a mosque, causing a divide”

Abdullah al-Ahsan is a professor of Political Science and International Relations at Istanbul Şehir University. His most recent book is Qur'anic Guidance for Good Governance: A Contemporary Perspective, 1st ed. (2017).