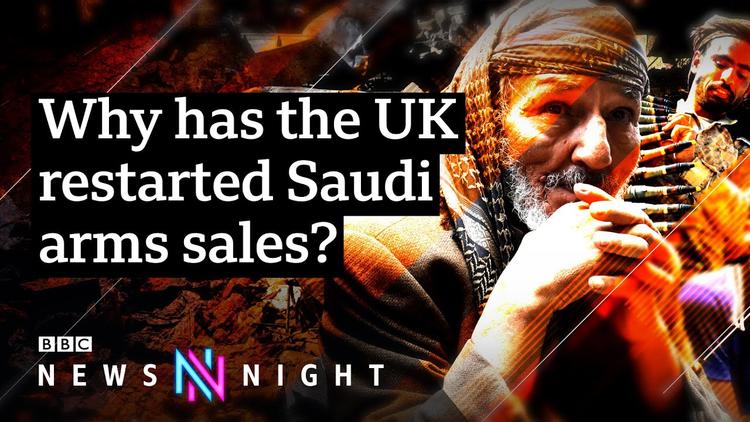 Tokyo (Special to Informed Comment) – “There is not a clear risk that the export of arms and military equipment to Saudi Arabia might be used in the commission of a serious violation of IHL [International Human Rights Law].”

So says the Honorable Elizabeth Truss MP – the UK’s top exports expert, and wolf in wolf’s clothing. Leafing through a copy of her statement delivered to Parliament last week, you could be forgiven for thinking Saudi infractions of IHL are “isolated incidents.” They’re not – six days later, the British defence minister would reluctantly admit to Parliament that his department has counted over 500 in Yemen. If you took Truss’ transcript at face value, you could also be persuaded into believing that the UK is nevertheless resuming arms trade with Saudi Arabia, as the New York Times would subsequently report. The truth is, it never really stopped.

Nearly a year has passed since a British court ordered the government to put a pause on the granting of export licenses to Saudi Arabia and revisit existing ones – a review that was estimated to take just “a few months.”No licenses have been revoked, no progress statements issued, and no Western warlords held to account. Instead, defense primes with licenses predating the ban (like BAE Systems) have continued to funnel arms and personnel to the conflict – and more than that, Truss has admitted that three licenses have been “erroneously” issued anyway.

You could look at the sheepish way British lawmakers have addressed the court-ordered pause as an example of the dangers of diplomatic duplicity. The results are absurd – Truss’ speech came just one day after Westminster levelled sanctions against 20 Saudi officials over the 2018 murder of Jamal Khashoggi, Saudi Arabian dissident and columnist for the Washington Post. As though that weren’t conflicting enough, that particular sanctions announcement was swiftly followed by an apologetic phone call from Deputy Minister of Defense Ben Wallace to his counterpart in the Kingdom, which was gleefully reported by the state-run Saudi Press Agency.

While all this is undoubtedly damaging to Britain’s reputation both at home and abroad, it offers a striking contrast to the current situation in the States, where a groundswell of opposition to the Saudi monarchy has rippled through oil-patch Republicans. After the Saudi-Russia price war caused US crude prices to dip into the negatives for the first time, the knives were out for Saudi crown prince Mohammed Bin Salman, popularly known as MBS. A group of senators from Texas, Louisiana, Alaska, and North Dakota accused the country of waging “economic warfare” on the US, and tried to push through legislation that would have withdrawn US troops as well as a decades-old bilateral security umbrella. Although the move captured several formerly pro-Saudi lawmakers – like Senator Lisa Murkowski (R-AK) – Washington policy has not actually changed and so you could well argue that this is yet more evidence of hypocrisy from Western leaders. Nevertheless, it is clear that 2020 could prove a tipping point for US relations with the regime.

If there has been a degree of commonality between American and British policy towards the country, it is that both have been motivated by money – and both are willing to contradict themselves in pursuit of it. The oil-for-security flavor of the framework meant this was somewhat inevitable as economic priorities shift, yet it seems that US-Saudi relations may be approaching a crisis point.

Is a Geo-economic breaking point on the horizon?

As for the US-Saudi relationship, “the only thing holding [it] together now is Trump—- he has a peculiar affinity for Saudi Arabia,” says Bruce Riedel, director of the Intelligence Project at the Brookings Institution, in April. Donald J. Trump’s first overseas trip as 45 was not to Mexico or Canada – as is the tradition – but to Riyadh. In yet another extraordinary departure from protocol, he brushed off advice from intelligence officials in the wake of the Khashoggi killing to, as he put it, “Stand With Saudi Arabia.”

But Trump’s worldview is guided by a sort of brutal transactionalism, one even more pointed than that of Elizabeth Truss. It’s worth bearing in mind that America now sources just 6% of its gross oil imports from the country, a figure that is likely to shrink over the years to come. And while his administration managed to ram through over $8 billion in sales to the Saudis in 2019 (nearly tripling that made out to second-placed contender, Australia), it’s hard to get a read on how much the scorched-earth price war will end up costing the US amidst the coronavirus downturn. Even Trump seems to have had enough, reportedly threatening to withdraw US troops from Saudi Arabia in a call to MBS on April 2.

At the heart of the US-Saudi relationship, at least as it was initially envisaged, is stability. A shotgun marriage, it is no great secret that American affinity towards Riyadh ties in to the outsize influence exercised by the fossil fuel industry in Congress. “It is ridiculous,” Kissinger famously raged at the outbreak of the 1973 OPEC embargo, “that the civilized world is held up by 8 million savages.”

Three months later, he was inside the palace of Saudi King Faisal, promising US economic, technical, and military aid. “Our objective is to work with Your Majesty and to strengthen our friendship on a long-term basis,” he told the king.

While it’s hard to separate out exactly how much of the slump in demand across 2020 is attributable to the Saudi price war, it’s clearly caused major headaches for the sector – with global benchmark Brent crude plunging more than 30 percent in just one day. Concerns amongst the sector played into the bipartisan nature of the resolution passed against US support for the war in Yemen in March 2019, which saw left-leaning Democrats stand united with firebrand Tea Party voices such as Senator Mike Lee (R-UT).

Amidst a strange new normal, humanitarians advocating for Yemen might find allies in the most unlikely of places. Hypocrisy? Maybe, but that’s just the nature of the game.