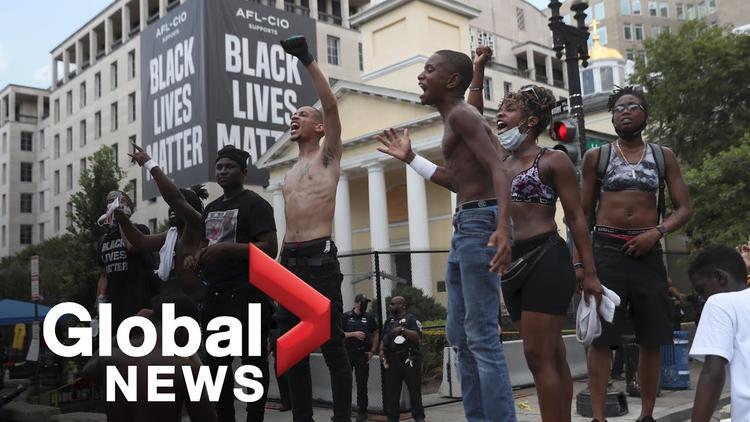 Chicago (Special to Informed Comment) – As Donald Trump sits idly by, the nation is experiencing both a catastrophic public health collapse that has brought international humiliation as well as a convulsive, impassioned protest movement that indicts police brutality and systemic racism. Trump’s negligent response to the pandemic — morally amounting to genocide — has been as fundamentally racist as the policing tactics that led to the deaths of George Floyd, Breonna Taylor and far too many other Black Americans.

The racism virus that has circulated for centuries has mutated and re-emerged from the White House wet market. Trump spends his diminishing mental capacity stoking the flames of white supremacy and raging over damage done to statues that honor confederate traitors and memorialize slavery. He celebrated Independence Day at Mount Rushmore by glorifying the legacy of white domination with a dystopian speech that excoriated anti-racist protesters as “evil” agents of a “new fascism” that want to “erase our values” and whose ultimate goal is “the end of America” — condemnations that describe himself. In an apparent effort to fuel the toxic emotionalism of his racist base, Trump’s only 2020 campaign pledge is to make the confederacy great again.

Trump’s Rushmore speech not only failed to mention racial justice, but avoided the coronavirus’s mind-numbing death toll and recent tsunami of infections. While questioning the value of testing, he himself lives in a protective biological bunker of regular Covid testing. Like a 21st century Prince Prospero who ruled a plague-ravished country in Edgar Allan Poe’s 1842 story “Masque of the Red Death,” Trump neglects the pandemic burning through the population. In Poe’s apocalyptic tale, the hubristic Prospero is happily holed up in his plague-protected fortress — a medieval Trump Tower — and does nothing to stop the “hideous red death” from “devastating his dominions.”

The gruesome, horribly fatal epidemic has already annihilated half the kingdom, but Prospero cares nothing about his suffering, dying subjects and abandons them to the fatal disease. Requiring constant self-aggrandizement, Prospero holds a party for his cult-like followers, who are described as “wanton,” “grotesque,” “bizarre,” and exciting “disgust” — not unlike the Trump Super-fans at his MAGA rallies. As Poe writes, “The external world could take care of itself. In the meantime, it was folly to either grieve or think” — an apt description of Trump’s mindlessness and indifferent, even antagonistic, response to the dual plagues of Covid-19 and racism.

The pathology of American racism is making the pathology of the coronavirus worse, as the virus cuts a devastating swath through an already vulnerable population: Black people bear a disproportionate share of the pandemic’s impact, most notably financial hardships, infections rates, hospitalizations, and deaths. For example, African Americans inordinately succumb to the effects of infection, dying at a rate almost two times higher than white people, according to data from the Covid Racial Tracker. In Chicago, Black residents make up 30% of the city’s population, but account for 60% of its Covid-19 fatalities as well as the highest rate of infection statewide, according to a study from the Chicago Urban League that blames systemic racism as the root of the over-representation.

On Sunday, The New York Times wrote that “Black and Latino people have been disproportionately affected by the coronavirus in a widespread manner that spans the country, throughout hundreds of counties in urban, suburban and rural areas, and across all age groups.” Immediate action is needed to prevent Black people as well as Latinx, Native Americans and other ethnic communities from suffering and dying at frightening rates. Yet, Trump surrendered to the pandemic, providing no national plan to mitigate the mass death of these racial groups, a genocidal calamity unfolding on his watch.

Incompetence, denial, and finally racism played a decisive role in Trump’s disastrous and still-unfolding failure. As the first coronavirus cases were diagnosed in the United States, in late January and early February, Trump and Fox News played down the risk it posed. His record of inaction, ineptitude, and inane remarks during the first months of the pandemic has been well documented. “It’s going to disappear like a miracle,” he said on February 27.

Demonstrating his disconnection from reality, he’s been saying this over and over and over, most recently on July 1, after more than 130,000 dead — the most on the planet. “Presidential inaction cost over 71,000 lives,” wrote the Washington Post in their “Trump Death Clock.”

After much pressure, Trump briefly instigated some action in early March. New cases, tied to international travel, snared many members of the global elite: American celebrities, world leaders, and those with close ties to Trump himself, reported Atlantic writer Adam Serwer.

In mid-March, the President declared a national emergency and, at the end of March, a partial (32 states) national lock-down began. New infections peaked in mid-April and began to diminish shortly thereafter. This limited success came at a high cost: Depression levels of unemployment, the shift to online or home schooling for millions of students, a viral wildfire through nursing homes, and families denied final visits to dying loved ones. Still, these mitigation sacrifices delivered decent results. If this progress had continued, the American people — and the American economy — might have experienced a further decline in cases and perhaps a significant slow-down of the pandemic as the European Union countries have done.

But that did not happen. Trump’s racism undermined the mitigation strategy. In early April, data about the demographics of Covid-19 victims began to emerge. The New York Times reported that Black and Latino Americans were being disproportionately killed by the coronavirus. That night, Trump’s beloved Fox News host Tucker Carlson announced, “It hasn’t been the disaster that we feared.”

Fellow Fox propagandist Brit Hume declared on twitter that Covid’s deadliness was exaggerated: “the disease turned out not to be quite as dangerous as we thought.” Once the disproportionate racial impact of the epidemic was revealed to the American right-wing political and financial elite, “many began to regard the rising death toll less as a national emergency than as an inconvenience,” wrote Sewer in The Atlantic. Following them, Trump reversed himself, disregarding his science advisors, and urged the reopening of the U.S. economy in mid-April.

Coinciding with Trump’s demands, anti-lockdown protesters — many of them brandishing weapons, confederate flags and pro-Trump signs — assembled at the capitols of Democratic-governed states to demand immediate reopening. They denounced virus mitigation strategies as “tyranny”— an imposition on their liberty to get haircuts, shop, consume, spit, and do as they please. The vast majority of these protesters — like the vast majority of those who wanted to prematurely reopen the economy — are white. Trump tweeted his support: “Liberate Minnesota; Liberate Michigan; Liberate Virginia and save your great 2nd Amendment. It is under siege!” Aggravating racial tensions and playing to his cult, Trump ceded any semblance of national leadership on the pandemic.

CDC guidelines called for 14 days of infection-declines before a state reopens. No states followed the two-week guideline, except early-hit Eastern and Midwestern ones. “I am very much in favor of what they’re doing,” Trump said in the Oval Office cheering on the southern and western governors who were racing to reopen. On April 29, he declared that federal social-distancing guidelines would be “fading out.” Many young party animals, among others, followed this suggestion.

In May, the virus exploded like a nuclear bomb in the south and west, initially among young people. The disease is spiking in places precisely where state governments — pushed by Trump — hastened to reopen bars, casinos, restaurants, shopping malls, and other indoor places of entertainment. Many Black people either lost their jobs or were forced back to work where they were exposed to the virus. Rashad Robinson, the president of the racial justice advocacy group Color of Change, said: Georgia’s governor “has targeted a whole set of businesses where black people both work and patronize. For those workers and customers, it is an absolute death sentence.” Phoenix, Houston, and other southern cities are suddenly reporting caseloads that look like New York City at its worst. Despite asserting “I’m not responsible,” this is Trump’s plague: he’s responsible for mass deaths.

The fundamental purpose of the president’s job is straight-forward: protect the citizenry. Any deliberate perversion of this priority is an exercise in malfeasance — especially when that basic aim is undermined by bigotry and supplanted by the goal of personal gain. Slow, ineffectual and self-serving, Trump repeatedly downplayed the virus, sidelined the experts, and misled Americans about the virus’s dangers, its potential treatments like the ineffective hydroxychloroquine, and its potential cures like bleach injections. With the help of his propaganda outlets, he continually tries to force his version of reality on us. On Sunday, Trump once again blamed testing for the rise in cases and said, “99% of the infection cases are totally harmless” — more outrageous lies, among thousands. Trump cannot bluster away the pandemic reality: almost 3 million infected, over 130,000 dead, and millions more out of work — all because he could not and would not do the job of disease control that requires precision, focus, and science-based messaging. The rapid spread of the pandemic and the deaths that disproportionately affect African Americans result from Trump’s racism and willful negligence. This amounts to genocide.

Article Two of the 1948 UN Convention on Genocide defines genocide as “deliberately inflicting on a national, ethnic, racial or religious group conditions of life calculated to bring about its physical destruction in whole or in part.” While there’s no legal definition of “Genocide by negligence,” the moral standard is clear-cut: Trump let thousands die by negligence, omission, and a failure to act. Letting people die is the moral equivalent of involuntary manslaughter.

According to former prosecutor Glenn Kirschner, Trump is guilty of this crime because he “failed to act and that failure was the product of gross negligence that thereby caused the death of another.” Mass death of a racial group resulted from the gross negligence and cruel mismanagement of this crisis by a sociopathic president. Yale epidemiologist Gregg Gonsalves agreed. In a series of tweets, he said that Trump committed “Genocide by Default” and asked “What else do you call mass death by public policy?”

Across the rest of the developed world, Covid-19 has been ebbing. As a result, borders are reopening and economies are reviving. Here in the U.S., however, Americans are suffering a new disease peak worse than the worst of April. How lethal will this new peak be? In “Masque of the Red Death,” the gruesome plague is so invasive that it even gets within the protected walls of Prince Prospero’s castle. The inevitable end Poe envisions is not one of salvation. It’s summed up in his last line: “And Darkness and Decay and the Red Death held illimitable dominion over all.”