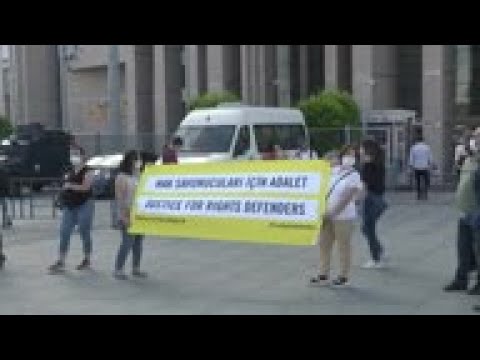 Turkey’s increasingly authoritarian government led by the Justice and Development Party (AKP) has always made use of crises to consolidate its power. The coronavirus has been no exception. The regime has cracked down on opposition and attempted to undermine its effectiveness, while endeavouring to legitimise the rule of the long-serving president, Recep Tayyip Erdoğan.

Since the AKP was re-elected in 2007, there have been continuous crackdowns on Erdoğan’s opponents, which intensified after a 2016 coup attempt. The coronavirus crisis has now provided the regime with a new angle with which to justify repression.

During the pandemic, one of the regime’s strategies has been furthering social media crackdowns on opponents. This has been made possible with the pretext of existing laws which allow the government to investigate someone for creating “panic and fear”, provoking people to “disobey the law”, or provoking the public to “hatred and hostility”. Since the start of the pandemic, over 500 people have been detained under these provisions – most commonly for criticising the government’s handling of the pandemic on social media.

Those targeted are from different backgrounds – ranging from ordinary citizens to journalists and politicians. According to Amnesty International, lorry driver Malik Yilmaz was detained and interrogated (although later released) for sharing a video in which he declared: “This virus won’t kill me, what will kill me is your system.” Meanwhile, news anchor Fatih Portakal is being investigated for posting a tweet about coronavirus economic policies.

Social media platforms remain one of the few outlets in Turkey where people are able to voice their criticism, as the major print and broadcast media are heavily under the regime’s influence. Even before the pandemic, there were efforts by the government to curb criticism on social media – mainly through intimidation.

In 2018 and 2019, over 96,000 social media accounts were investigated by the Ministry of Interior in an attempt to encourage self-censorship. Although this has been effective to an extent, a vast amount of criticism still circulates on social media.

In April, a draft law on economic measures to tackle the coronavirus crisis included articles aimed at increasing the regime’s control over social media platforms. Although the articles were eventually removed, the regime did not abandon the idea of having a tighter grip over social media.

In early July, Erdoğan announced he wants “social media platforms completely shut down or controlled” as they “don’t suit this country and our people”. On July 21, the government submitted proposed legislation to parliament aimed at increasing state control over social media. If passed, social media companies would be obliged to have representatives in Turkey and respond within 48 hours to requests to remove “offensive” content.

Turkey has the world’s 15th highest number of confirmed coronavirus cases at around 221,500, with more than 5,500 deaths. Although the rate of infection slowed down after a peak in April, the virus has been widespread with all of Turkey’s 81 provinces reporting cases.

The AKP seems keen to claim sole credit for managing Turkey’s response to the crisis. A ban was imposed on several municipal donation campaigns run by the opposition, stopping activists launching independent crisis relief schemes. The regime announced that these campaigns needed prior approval by the central government, while turning a blind eye to similar campaigns by AKP-run municipalities.

The aid prevention policy appears to be an attempt to undermine the opposition, particularly in municipalities such as Istanbul which came under the control of the Republican People’s Party (CHP) in local elections in April 2019. Istanbul’s new mayor Ekrem İmamoğlu is seen as a serious threat to Erdoğan. He continued to organise aid campaigns in Istanbul despite the ban, and now faces an ongoing investigation by the Interior Ministry. Nonetheless, the AKP’s efforts seem to have backfired, and İmamoğlu’s popularity has been further boosted according to recent polls.

The pandemic has allowed Erdoğan to improve Turkey’s battered international reputation and shore up the legitimacy of his regime abroad. The government’s widespread distribution of humanitarian aid, despite the possibility of domestic shortages, has allowed the regime to mend ties with the US and Europe.

The country has also used aid to shore up its position in the Balkans and improved its relations with regional adversaries. These actions gain Turkey much-needed allies, softening international criticism of Erdoğan’s military interventions in Syria and Libya.

Domestically, Erdoğan’s government is trying to cloak itself in a humanitarian guise following repressive actions towards its opponents, and so shore up its legitimacy in the eyes of the public. By doing this Erdoğan is taking a page from the playbook of authoritarians the world over by seeking to manage his image as a benign ruler.