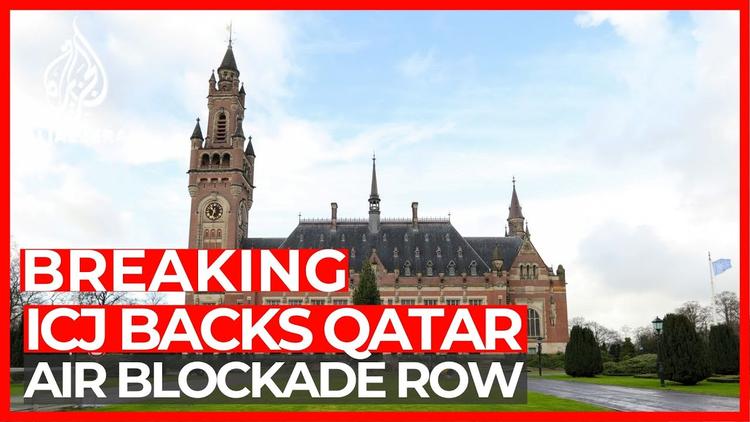 A press release issued by the International Court of Justice (ICJ) on 14 July described its judgement against Bahrain, Egypt, Saudi Arabia and UAE as “final, without appeal and binding on the Parties.” Since June 2017, the four countries have imposed a land, air and sea blockade against the State of Qatar. When Qatar started proceedings at the Council of the International Civil Aviation Organisation (ICAO) in October 2017 the Blockading Four challenged the move claiming that the ICAO lacked the jurisdiction to “resolve the claims raised.”

Having now lost their appeal, the blockading countries must climb down from their high horses and return to the ICAO, which according to the ICJ does have the jurisdiction to entertain the application submitted to it by Qatar. Accepting this outcome would be like having to take bitter medicine. Undoubtedly, this dreadful public humiliation was always avoidable.

Two unmistakable issues lie at the heart of the current crisis; the first is the disregard for Qatar’s sovereign rights and the second has been the refusal of the four countries to negotiate in good faith.

From the onset, the motives of the Blockading Four seemed extremely dubious, even to the US, Saudi Arabia’s close ally. State Department spokeswoman Heather Nauert said: “Now that it has been more than two weeks since the embargo started, we are mystified that the Gulf states have not released to the public nor to the Qataris the details about the claims that they are making toward Qatar.” She added: “The more that time goes by the more doubt is raised about the actions taken by Saudi Arabia and the UAE.”

By early July 2017 the four submitted a list of 13 demands through the Kuwaiti government, who offered to mediate. Altogether, they were widely seen as a violation of Qatar’s sovereignty. Foremost among these were for Qatar to: Shut down Al Jazeera channels; end military cooperation with Turkey; curtail diplomatic ties with Iran; align Qatar’s military, political, social and economic policies to other Gulf and Arab countries and sever ties to all “terrorist, sectarian and ideological organisations,” specifically the Muslim Brotherhood.

At the time, Qatar’s Foreign Minister Mohammed bin Abdulrahman al-Thani informed a press conference in Rome that this list of demands was made to be rejected. It’s not meant to be accepted or … to be negotiated. Indeed, two days after announcing their blockade the Emirati Minister of State for Foreign Affairs Anwar Gargash told Associated Press, “there is nothing to negotiate” with Qatar. Given this level of unreasonable intransigence, it is well within Qatar’s right to seek arbitration. Hence, it was in this context Doha decided to take its case to the ICAO.

This week’s judgement by the ICJ, the principal judicial organ of the UN, has cleared the way for international arbitration. As signatories to the UN Charter, the Blockading Countries – Bahrain, Egypt, Saudi Arabia and UAE – must respect the ruling and honour their treaty obligations. Surely, after consistently rebuffing all appeals to negotiate they now run the risk of having to bear the consequences of arbitration.

Despite its best efforts to alleviate the damaging impact of the blockade, the State of Qatar has suffered huge financial and commercial losses; not to mention of course the devastating individual human costs, as well as emotional and psychological suffering caused by the forced separation of families and disruption of social life.

The mere fact that the ICJ’s judges unanimously voted against the appeal of the Blockading Four is in itself a testimony of the strength of Qatar’s case and validity of the measures it adopted both regionally and internationally. Should they be successful in litigation the dividends will be massive. Had the Blockading Four chosen the path of negotiation they would not now be facing the prospect of having to pay out enormous sums in damages and reparations.

By any standards, the ICJ’s ruling represents a legal setback for the Blockading Countries as well as a damning political indictment. Although the judgement will not bring about an immediate end to the terrestrial, maritime and aerial restrictions imposed on Qatar, it does constitute a major step toward that end. While the ICAO will rule on Qatar’s right to freedom of civil aviation, Doha will have to challenge the other restrictions in the relevant international agencies.

Was this manufactured crisis really worth the trouble? Was it ever about “extremism” and “terrorism” as the Blockading Four have claimed? Given the way events have unfolded in the Gulf since June 2017 the only demand that the four did not have the moral courage to make back then was for Qatar to normalise its relations with Israel in the manner that they have done.

If there was one lesson that can be drawn from this tragedy it is that genuine negotiations are always less costly than arbitration.

Dr Daud A. Abdullah is is a former Deputy Secretary General of the Muslim Council of Britain and the Director the Middle East Monitor