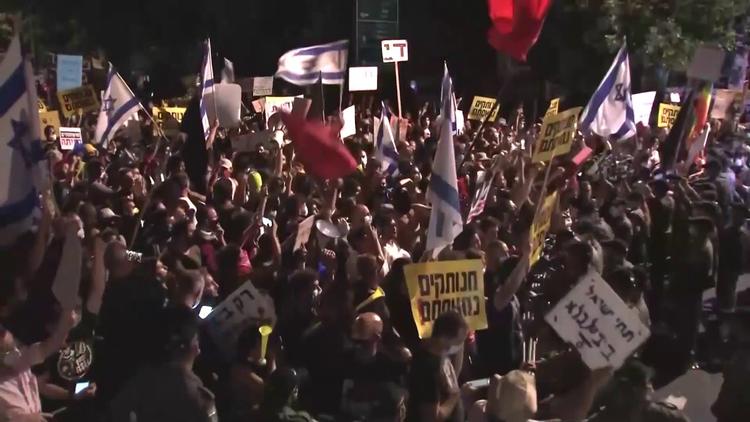 Ann Arbor (Informed Comment) – A few thousand demonstrators gathered in front of the home of Israeli prime minister Binyamin Netanyahu on Balfour St. in Jerusalem on Tuesday, protesting his handling of the novel coronavirus, his handling of the economy, and his personal corruption. They called on him to resign and “to go,” recalling the slogans of the Arab Spring that chased Egypt’s Hosni Mubarak from office.

At some points, some in the crowd attempted to get past the barriers set up by Israeli police. Later on, many protesters formed a procession in Jerusalem streets, closing them.

Netanyahu is under indictment for corruption but was allowed by the president and the courts to take up another term as prime minister.

Noga Tarnopolski at The Daily Beast reports that Israeli scientists are convinced that the current Covid-19 outbreak in Israel was caused by Netanyahu’s haste to reopen the country, especially his decision to send all children back to school in mid-May.

By the beginning of June, hundreds of schools were forced to close back down after students fell ill with Covid-19, as Harvard epidemiologist Eric Feigl-Ding pointed out with a graph:

Things have gotten worse since then. On Monday alone, 1,962 new cases were confirmed in Israel. The US population of 330 million is 37.5 times bigger than Israel’s 8.8 million. So that is the equivalent of 73,575 new America cases in one day. The seven-day average for new coronavirus cases in the US is a bit over 60,000, and the US is a Covid dumpster fire. Israel is proportionally doing even worse than Trump’s US.

Health authorities in the Palestinian West Bank are afraid that most of the disease spread there is because of Palestinian workers with jobs in Israel, who are bringing the virus back with them.

The spring shutdowns caused Israeli unemployment to soar, to Depression-era levels of some 28 percent, as well. Since the mid-May opening, unemployment had fallen to 12%, but this weekend it began spiking again and some restaurants and other businesses were forced to close. The far right wing Likud government has presided over the dismantlement of formerly socialist institutions and policies in Israel, pushing the country toward vast inequalities that mirror what has happened in the US since Reagan destroyed the progressive income tax system.

Israel has some of the worst economic inequality in the OECD nations, up there with the US. Even when unemployment was low, many of the jobs were part time or poorly paid. Many Israelis have difficulty affording rent.

With the spike in unemployment this spring, and the likelihood that it will worsen in the coming weeks as the country is forced to go back into shutdown, youth have been hit especially hard. Opposition leader Yair Lapid, who styles himself a defender of the beleaguered Israeli middle class, warned last week that with 800,000 Israelis out of work, there could be social turmoil.

Netanyahu’s arrogance and over-confidence has often gotten him into trouble, but he has thus far managed to escape their worst consequences, partly because he is a master at playing on Israeli racism, and partly because of the backing for him of billionaires like corrupt casino mogul Sheldon Adelson. He has never, however, faced a challenge as dire as the novel coronavirus, which does not care if you are a showman, and, indeed, takes advantage of showmanship like the premature opening of schools and the economy.

Does any of this sound familiar to Americans?