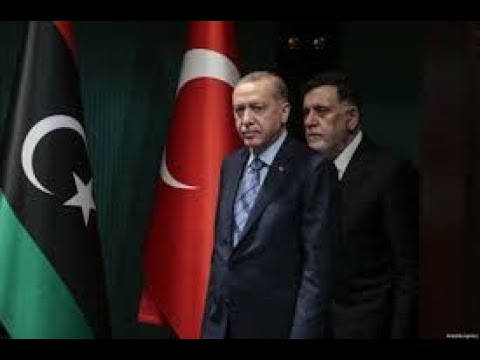 Ann Arbor (Informed Comment) – Libya has become a multipolar battleground unusual in the era since 1946. The UN-recognized General National Assembly (GNA) government in Tripoli is ranged against the forces of Benghazi-based Gen. Khalifa Haftar.

Haftar is supported by the Russian Federation, Egypt, the United Arab Emirates and diplomatically, France.

The GNA is supported by Turkey, which has sent in a few thousand Syrian mercenaries (battle-hardened rebels who lost in their home country and who skew to the religious Right). Although ordinarily the Turkish backing would also implicate NATO, Turkey’s Libya position is opposed by Greece, Italy and France and so Ankara is isolated on this issue. Turkey in Libya helps create an Eastern Mediterranean strategic position for that country, stretching east from Tripoli to eastern (Turkish) Cyprus and thence Turkey itself. Turkey is interested in gas deposits off Cyprus that Greek Cyprus, Greece, Italy and France also have their eye on. It is also interested in Libyan oil, which is at the moment not being much pumped and is under Haftar’s control.

The two sides, the GNA and Haftar, are gearing up for a big battle over Sirte, which would be the GNA’s gateway to recovering some of the oil fields.

Egypt has become so alarmed at the inability of Haftar’s forces to take or at least contain Tripoli that its parliament just voted to permit an Egyptian military intervention in Libya. Egypt’s army hasn’t been directly involved in a foreign war since 1973.

France has been inconsistent, supporting the Syrian Muslim Brotherhood against al-Assad but now supporting Haftar against the Libyan religious right. Go figure.

As usual in the Trump era, Washington is split. Trump has voiced support for Haftar, but doesn’t seem to want to get directly involved in Libya. The US national security apparatus is upset about Russia’s increasing involvement in eastern Libya, including its deployment of aircraft and of Wagner Group mercenaries there.

That is actually an amazing conclusion, and may (I stress may) suggest that the world is returning to a Great Power multi-polarism of a sort that was common in the eighteenth, nineteenth and early twentieth century.

Few people alive remember that multi-polar world before 1945, when Britain, France, Germany, Russia and Japan were all Great Powers in kaleidoscopic conflict with one another.

Now multipolar struggles have emerged in Libya. They could spiral out of control. Egypt and Turkey could go to war with one another in Libya. Russia and Turkey have been frenemies in recent years, but the potential is there for their relationship to deteriorate into simple enmity.

The last war between Egypt and Turkey was in the 1830s, when Ibrahim Pasha, the son of the Egyptian ruler Muhammad Ali, made a push into Syria on the way to Istanbul that was only stopped by European intervention. Austria, France and Britain all stood against any change in the status quo, essentially protecting the Ottomans from Egypt.

In the 1850s, a decade later, the Crimean War ranged Tsarist Russia against France, Britain and the Ottoman Empire. Russia lost that one. The Ottomans offered the French and British reliable passage from the Mediterranean through the Red Sea and the Tigris-Eurphrates river valleys to their Asian colonies, and London and Paris liked the arrangement and opposed any change in the status quo. They essentially acted as protectors of the Ottomans.

Fast forward to bipolarism. With Europe economically devastated by World War II and the European empires dwindling with post-war decolonization, two titans bestrode the world as of 1945, the Soviet Union and the United States.

From the Azerbaijan Crisis of 1946 until 1991, conflicts tended to be worked into the Cold War between them. It was a bipolar world in the sense that there were two big political poles toward which the nations of the world gravitated. Did Syria and Israel have a conflict? Israel gravitated to the US and Syria to the Soviet Union. Did Vietnam struggle to escape French and then American imperialism? It became a struggle between the US and the Soviet Union and their allies.

After 1991 and the collapse of the Soviet Union, a unipolar world emerged, of American power. It allowed the Iraq War. In the old days, the Soviet Union would have forestalled a US invasion of one of its clients. It allowed the US to intervene around the world without fear of being blocked. The US largely squandered its 30 years of dominance. It is hard to see what it gained from its Iraq and Afghanistan adventures.

Russia came into Syria in 2015 and has defeated the Syrian rebels, many of them Muslim Brotherhood or other fundamentalists, which the CIA had backed.

Turkey basically kicked US troops out of northern Syria and then attacked the US allies, the YPG Kurds. Turkey is also trying to stop al-Assad and Russia from taking Idlib Province in Syria.

The Trump administration is largely uninterested in the substance of geopolitics, but rather is satisfied with the appearance of willingness to negotiate US demands, as with North Korea. Curbing China and strangling Iran are virtually the only actual major Trump policies toward the rest of the world.

The US turn inward and the paralysis of the country in the face of the coronavirus pandemic, has opened up new spaces for other great powers, and for regional powers, to assert themselves.

The US is irrelevant to this one at the moment.