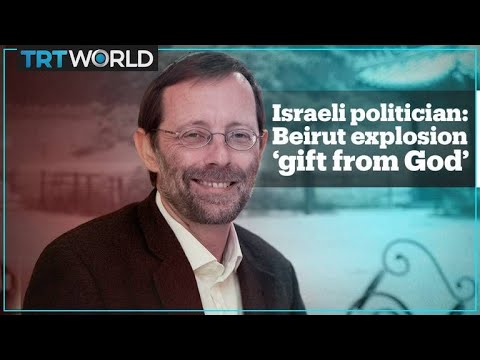 ( Middle East Monitor “> ) – The massive explosion in Beirut this week which killed at least 140 people and wound 5,000 others looks set to have serious implications for relations, such as they are, between Israel and Lebanon’s Hezbollah. The Zionist state is likely to use the blast in its favour, while others are looking for Israel’s fingerprints on the disaster.

According to Israel, the explosion boosted its fading deterrence factor without it having to fire a single shot. The main blast, some say, triggered secondary explosions in Hezbollah arms caches causing considerable damage to homes and infrastructure.

Conspiracy theories aside, the Lebanese need to determine who was responsible for the explosion; many do indeed point the finger at Israel. Whatever the cause, the effects will be felt for a long time.

In the short term, however, missing people have to be accounted for, and the wounded have to be treated. It will take time, but Lebanon will recover. In the meantime, two questions need urgent answers: who was responsible for storing the deadly ammonium nitrate in such unsafe conditions? And did the warehouse in question belong to Hezbollah?

The movement is keeping relatively quiet at the moment, perhaps out of shock and the need to analyse the explosion’s impact. Not surprisingly, its leader Hassan Nasrallah cancelled the speech that he intended to deliver on tension with Israel. It was a speech that Israel was waiting for to understand its position after the recent events on its northern border with Lebanon.

READ: Israel whitewashes its barbarism through offering help to Lebanon

The Israelis did not remain silent. Military spokesman Avichay Adraee claimed that Iranian weapons are taken into Lebanon from Syria by Hezbollah. Beirut Port, he said, is also used as a maritime hub for weapons that Iran sends to Hezbollah.

The former deputy speaker of the Knesset, Moshe Feiglin, was gloating openly: “The Israelis watched an amazing display of fireworks in the port of Beirut, and its devastating effect is like a small nuclear bomb. Today is a day of joy. Today is Tu B’Av, a day of joy, and a true and huge thank you to G-d and all the geniuses and heroes really (!) who organized for us this wonderful celebration in honor of the day of love.”

Israel’s reaction confirmed that the Beirut explosion was a game changer for Hezbollah. The movement knows that it will turn unwanted attention towards its missile arsenal, which Israel claims is being stored in houses in the city in order to obtain some space which is immune from Israeli air strikes. Ironically, Hezbollah had threatened previously to bomb ammonia containers in Haifa Bay.

As soon news about the explosion hit the airwaves, Israel denied any responsibility without delay. It has a record of bombing Beirut, of course, and occupying the Lebanese capital, so it was not unreasonable for people to think that an Israeli missile was responsible for the devastation that followed. If enough people believe this — and many do — then that is the deterrence factor re-established, and the destruction inflicted on the city will make it difficult for Hezbollah to carry out its threats to retaliate against Israel, and thus risk a major armed confrontation. Stability remains a dream for the Lebanese as they try to cope with the Covid-19 pandemic, their worst economic crisis and now this explosion. Further instability may follow.

Despite all of this, in the immediate aftermath of the blast, the Israeli government contacted Lebanon through intermediaries to offer humanitarian assistance. This is unlikely to be accepted as the countries are still technically at war. However, it could possibly lead to a radical change in relations between Beirut and Tel Aviv, with Hezbollah toning down its political role in Lebanon and stepping back from its offensive-defensive stance on the border.

According to Israel, its agents have been seeking intelligence on Beirut Port among other sites as places of military significance. In October 2018, Israel revealed a move by Hezbollah to establish factories to assemble precision missiles in the Beirut area: one was in a football field, the second was near the airport, and the third was in Beirut Port. Hezbollah has stressed that it had no missiles or other weapons stored in the area of the blast.

Israel will continue to monitor broadcasts and other media to seek answers and be up to speed on public opinion about the blast. Whatever the reason and cause of the explosion, the Zionist state needs to be ahead of the game, militarily, politically and diplomatically. Hezbollah, meanwhile, may be playing a game of wait and see before showing its hand. What happened in Beirut on Tuesday has implications for both; and what happens next will affect everyone else in the region.

Dr Adnan Abu Amer is the head of the Political Science Department at the University of the Ummah in Gaza. He is a part-time researcher at a number of Palestinian and Arab research centers and he periodically writes for Al Jazeera, the New Arabic and the Monitor. He wrote more than 20 books on the Arab-Israeli conflict, the Palestinian resistance and Hamas.