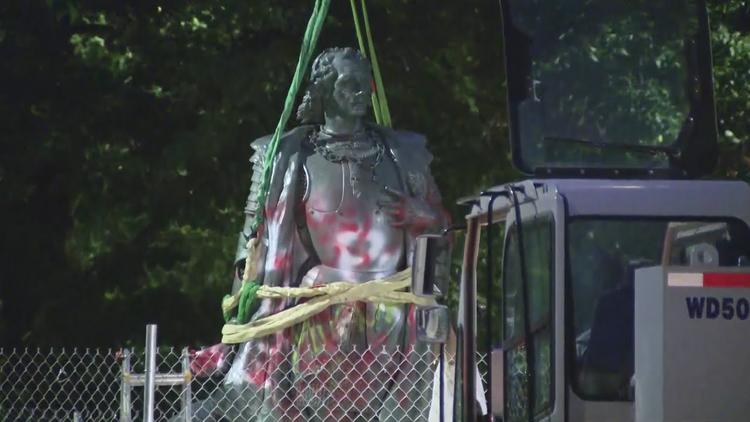 Chicago (Special to Informed Comment) – Chicago Mayor Lori Lightfoot ordered the removal of two statues of Christopher Columbus after police and protesters clashed last week. The confrontation at the navigator’s monument in Grant Park resulted in injuries to both officers and demonstrators. According to NBC News, Chicago Police Department officials confirmed that the gathering was peaceful until a small group began throwing objects. Carting away the Grant Park Columbus came after some protesters had earlier tried to pull it down. The second one stood in Arrigo Park, in the city’s Little Italy neighborhood.

Lightfoot’s move has sparked much local and national criticism.

Some Italian-Americans are angry about the mayor’s decision, considering it an insult to their national pride and a fellow countryman. The city’s Italian immigrant community raised the money for the Grant Park Columbus and gifted it to Chicago in honor of its centennial during the Century of Progress and Second World’s Fair in 1933.

Speaking of Italian ethnic pride, Columbus did not have much of that. He swore loyalty to King Ferdinand and Queen Isabella of Spain, who controlled what was then called the Kingdom of Naples and Sicily. With the exception of a couple of short, unsuccessful French incursions there, Spain dominated southern Italy for generations. Historian H.G. Koenigsberger writes that the Spanish “with their contingents of Italian soldiers, sacked their cities [and] laid waste their countryside … Spain, holding Sicily [and] Naples, … dominated and stifled Italian political life.”

Columbus claimed vast territories in the Americas, took whatever gold he could find, and established colonies all for the greater glory of and to help finance the Spanish crown. At that time and for many years after, it was also the kingdom that militarily controlled and economically exploited the very region of Italy where most Italian-Americans’ ancestors once lived. It is likely that Columbus could not have cared less about poor farmers and fishermen from Naples and Sicily.

According to the Chicago Tribune, Northwest Side Alderman Anthony Napolitano (incidentally, his last name indicates that his ancestors were from Naples) complained that that the dual Columbuses’ banishment was decidedly un-American. He said that they were taken away without “discussion [and] debate.” As a result, the city has “lost its sense of decency and American soul.”

And Fox News’ Tucker Carlson claimed that hurling water, firecrackers, and soft drinks at the likeness of the Genoese admiral is just the start of dark, chaotic days ahead for the entire nation. He suggested that “they” will soon arrive somewhere and attack some people with something far more lethal than a two-liter bottle of Mountain Dew. “Violence rarely remains symbolic,” he said.

Columbus never bothered much about democracy, discussion or debate, and his violence was literal, never symbolic. In addition, he was neither decent nor the embodiment of the “American soul,” as Alderman Napolitano calls it, unless he means that Americans should aspire to the murder and slave trading that shocked even some of Columbus’ contemporaries. The admiral was also a dictatorial, incompetent administrator, obtuse geographer, and ambitious social climber. He lied about the actual amounts of and alleged easy access to gold on the Caribbean islands so that he could ingratiate himself to his benefactors at the Spanish court.

When Columbus first arrived in present-day Haiti and Cuba, which he insisted to the end of his days were located in Asia, there was little gold to be found. He instead filled his ships with slaves—indigenous Arawaks—and sent them back to Spain. Many died from disease or abuse on the way to Europe. In Hispaniola, today’s Haiti and Dominican Republic, the Spanish forced Taino men to dig for gold on the island’s mountains and many were dismembered or killed outright for not supplying the required amounts. Forced labor on cassava plantations was also common, and thousands died from starvation, illness, overwork or suicide. Rape was a grim fact for thousands of native women.

A witness to the early colonization of the Caribbean, a Catholic priest named Bartolomé de las Casas, described how the Spaniards under Columbus “thought nothing of knifing Indians by tens and twenties and of cutting slices off them to test the sharpness of their blades.” Other similarly gruesome examples of Spanish rule are legion and make for difficult reading.

Yale University’s Genocide Studies Program estimates that 25 years after Columbus’ arrival, an indigenous population that numbered between several hundred thousand and one million had been reduced to just 32,000.

One can find better, more deserving heroes who actually exhibited the literal, not symbolic, quality of “decency” that could animate the “American soul.” Since there are now two vacant pedestals, I can recommend at least one person: Her name is Florence Scala.

Most people outside of Chicago do not know who she is. For some who are from the city or its environs, however, she is something of a local legend. There is much to recommend her to statue or at least memorial plaque status.

First, the similarities: like Columbus, Scala was of Italian ancestry. She was born in 1918 to Alex and Teresa Giovangelo, immigrants from Italy who settled in the city’s Near West Side Italian neighborhood. Her father was a tailor and her mother a garment worker. Similar to the Admiral of the Ocean Seas, she also did not discover North America. Other people from Asia did that thousands of years earlier, and there is no statue of them in either Grant or Arrigo Park.

But the differences between the two are more instructive. Besides never having participated in ethnic cleansing, Scala stood up to those in power, while Columbus mostly flattered them. She valued building community, fostering democracy, and providing support to vulnerable people; Columbus and his men decimated entire populations in their quest for wealth, fame, and domination.

Scala, whose family had little money for school, started taking classes at the Hull House settlement, which was run by the socially progressive Jane Addams. Like other such organizations, Hull House was located in and served poor immigrant communities by providing meals and an array of free classes. It also offered no-cost concerts, lectures, and vocational training. In addition, Addams and her staff advocated for political and social reform, championing the rights of women and working people from all backgrounds for many decades. Scala volunteered there for over 20 years. She said that when she began to spend time at Hull House, “Life began to open up,” and she and her family realized that “There was something else … beside sewing and pressing.”

In 1961, the city announced that the University of Illinois at Chicago would be built right in her neighborhood. To make way for it, hundreds of homes and businesses, as well as Hull House, would fall victim to the wrecking ball. There were better places for the university, like areas with no people in them, but the city wanted the Little Italy location. Scala headed up a community organization and went to battle with America’s version of Spanish royalty: Mayor Richard J. Daley, last of the big city bosses.

They marched, started petitions, organized, educated, wrote to and visited government officials. Scala and her group camped out on the fifth floor of City Hall, right outside of Daley’s office. One time, as the mayor was leaving for the day, he passed the little group, and then came back, stopping for a moment where Scala was sitting. He asked if he could buy everyone a cup of coffee. Apparently, the mayor felt a little sorry for them. She declined. He shrugged and walked away.

She had met him before and said that he could be disarmingly friendly, full of Irish charm and promises of new housing. She refused to fall for it. Essentially, Scala told a man, who had the power to make or break US presidential candidates and commanded the obedience of thousands of patronage workers, to take a long walk off a short plank.

Later, Scala said that she should have had that cup of coffee with him. She mused that maybe, since he was also the product of a tight-knit ethnic neighborhood, she might have been able to change his mind.

Their fight made it all the way up to the US Supreme Court, but in the end, the university was built, and most of the Hull House settlement destroyed. Daley got what he wanted and went back on his pledge to build new homes for them.

She kept on advocating for the people of her neighborhood, fighting real estate and big business interests and epidemic-level corruption. In 1963, Scala ran as an Independent candidate for the notoriously corrupt First Ward, lorded over by shady Alderman John D’Arco. Before losing the race, her family’s building was bombed. Still, she stood her ground, refused to move away, and remained active in community organizing.

Later, she and her brother, Mario, converted the first floor of their building into a restaurant. She called it Florence.

Those whom we choose to honor are commentaries about the kind of America we would like to be. Crucially, some of our poor choices of flesh-and-blood candidates have been and will continue to be quite literally fatal if we reject the priorities of decent people like Florence Scala.

With or without a statue, she is worth remembering when we cast our ballots in November.