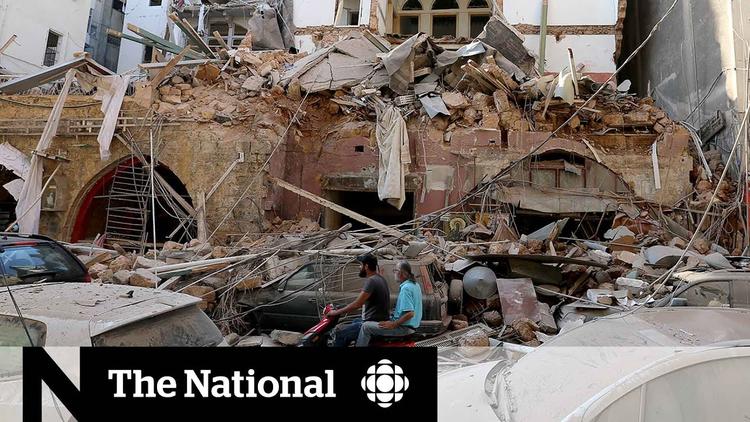 Ann Arbor (Informed Comment) – Some 300,000 people in Beirut have been left homeless by the enormous explosion at the city’s port on Tuesday, which left it without a means of importing by sea. Half of the city has been damaged. 80% of Lebanon’s grain is imported, and the grain silos were destroyed. Thousands of buildings are unsound and uninhabitable. Thousands were injured, and forced to go to hospital where they feared contracting the coronavirus, if they could find a hospital that had room, since some hospitals had been destroyed.

Families are combing rubble in hopes of rescuing loved ones trapped beneath, and desperately putting their pictures online. Even before this catastrophe, nearly 1 million out of the country’s 6.8 million residents were unable to meet their monthly expenses and had begun skipping some meals, because of the collapse of the country’s banks and currency, and because of the Covid-19 recession in tourism and other industries. Now, famine is knocking at Lebanon’s door.

This explosion was a crime, a crime of negligence. CNN reports that Badri Daher, the Director of Beirut Customs, has repeatedly asked for the 2,700 metric tons of ammonium nitrate stored at the port to be removed since it was offloaded from a sinking ship in 2013. Efforts were made to have the Lebanese army take it over.

Nothing happened. Prime Ministers Najib Mikati, Tammam Salam, Saad Hariri, and Hassan Diab, all left the hazardous material there. Maybe Daher’s letters never went up that far. But the buck stops with the prime minister and the cabinet.

As I contemplate a bombed-out Beirut once again, my heart hurts. I lived there during the beginnings of the Civil War in the 1970s, when buildings began looking like Swiss Cheese, though that took years of bombardment and fighting. This happened overnight. I think I have a little bit of PTSD from those days. I still don’t watch war movies for fun. And the scenes now coming out are depressing in the extreme. I cry easily.

The thing that frightens me most about what is essentially an industrial accident is that it resembles the climate emergency so much.

The energy in the carbon dioxide we are pouring into the atmosphere by burning coal and gasoline is much greater than what was in Beirut’s ammonium nitrate stores.

Climate scientists such as Michael Mann of UPenn are playing Badri Daher, warning as loudly as they can that a disaster is coming if no steps are taken.

The same faceless bureaucrats that received Daher’s letters and dropped them in the trash bin are in charge of our energy policy. Our current Secretary of Energy, Dan Brouillette, is “confident that oil and gas will come back strong.” He has no clue that this is like saying that he is sure that the Los Alamos open-air nuclear tests will come back strong. Trump wanted to bring back the coal industry. He may as well just send nuclear submarines to sink Miami.

That is, the climate emergency is an epochal global crisis that will wreak vast devastation, even worse than the explosion in Beirut. Some of that destruction is already happening, and it will get worse rapidly.

Anyone with a modicum of intelligence who looks into the issue seriously and dispassionately will conclude that we have an urgent emergency on our hands. It is not being treated like an emergency. We even closed down the economy for a couple of months for a virus; but the 5.5 billion metric tons of CO2 we’re spewing into our atmosphere every year? That’s not even mentioned on cable news.

Hannah Arendt spoke of the banality of evil. In our own situation, we have the banal evil of negligence.

As for Beirut, it may suffer long-term damage as a city. The Lebanese government is switching to the northern city of Tripoli as its main port until the Beirut facilities can be rebuilt. This could change the country’s ethnic political dynamics if Tripoli captures some of the wealth that used to go to Beirut and the latter declines. Tripoli is majority Sunni Muslim, whereas Beirut is multicultural, but Christians and Shiites bulk large there.

AFP reports that volunteers are cleaning debris from the streets and offering to fix doors and windows, but that no government workers are visible. Lebanese youth protested all last fall against their corrupt and do-nothing government. In a parliamentary system, however, there really isn’t a good way to make a rapid and major change to government. A prime minister could step down, but the prime minister is just the head of the major coalition in parliament, so the party will remain and throw up a very similar prime minister or one worse. Lebanon’s voting system is rigged so that the same parties always win the elections, with minor variations in the proportion of seats they hold. People are forced to vote according to their religion.

The entrenched political elites are responsible for convincing private banks to lend to the central government to cover its $80 billion in budget shortfalls. Basically, the government was running a Ponzi scheme, whereby it was borrowing new money to pay off debts as they came due. When the currency collapsed against the dollar, losing 4/5ths of its value since last October, it meant the government was either not repaying its creditors at all or was paying them pennies on the dollar. The country may be entering a Venezuela-like stage of hyper-inflation. (Since it is driven by currency free fall, the destruction of the city’s downtown may not even be deflationary, since confidence in the currency vis-a-vis the dollar will worsen).

Beirut is now a symbol, not of resilience or of the achievement of a Paris of the Middle East (always an Orientalist trope), but of criminal negligence on the part of leaders.

The problem is that we are all Beirut.