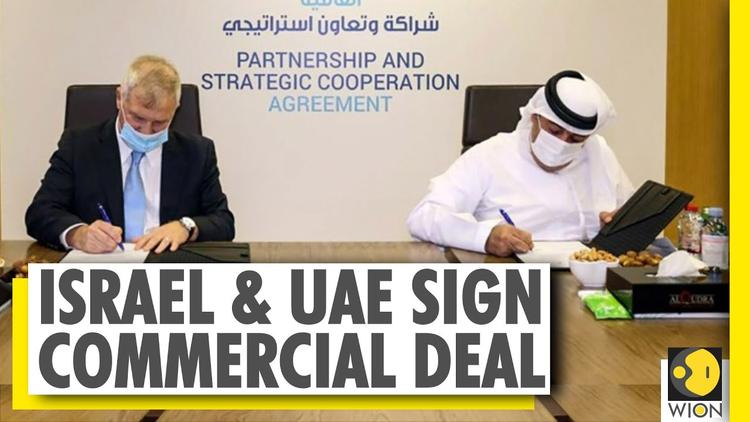 The normalisation of diplomatic ties between Israel and the United Arab Emirates has variously been described as a “breakthrough” and an important staging moment towards a comprehensive Middle East peace.

These conclusions are, at best, premature.

Normalisation of relations between Israel and an important Gulf state is a highly significant development whose fallout is unpredictable. What seems clear is that the UAE initiative will further deepen a regional divide.

In the Middle East, historic shifts rarely take place without unforeseen consequences. Israel’s pledge not to go ahead with the annexation of one-third of the West Bank and the Jordan Valley for the time being will be cold comfort for the Palestinians.

What has been exposed by the normalisation agreement between Israel and the UAE, brokered by Washington, is acceptance of the arguments for a regional buffer to counter Iran’s growing power and influence.

This is a marriage of convenience.

The enemy of my enemy is my friend

It should go without saying that absent Iran’s growing security threat to Gulf states, it’s doubtful such a normalisation of ties would have taken place outside a comprehensive Middle East peace.

The latest development bears out one of the Arab world’s stock standard sayings: the enemy of my enemy is my friend.

In other words, an Iranian threat to the UAE and its fellow Gulf Cooperation Council members has brought about an accord with Israel that would previously have been unthinkable.

This is not to say this development is unexpected.

Israel has gradually broadened its informal diplomatic contacts with Gulf states in recent years to the point where little attempt has been made to disguise these contacts.

These interactions included a visit by Israel’s Prime Minister Benjamin Netanyahu to Oman in 2018.

In all of this, a fault line in the Middle East is likely to deepen between Sunni Muslim states and Iran, as well as that country’s allies in Syria and in Lebanon.

These Sunni states, led by Saudi Arabia and backed by the United States in collaboration with Israel, are building a buffer against Iran.

It may be simplistic to say this, but a die has been cast.

What will other Gulf states do?

Of course, it remains to be seen whether regional friends and erstwhile enemies will remain steadfast in their new commitments.

In the shifting sands of Middle East power politics, today’s friends can be tomorrow’s enemies.

If Israel and the UAE are the betrothed in a marriage of convenience, the Trump White House is the matchmaker. Behind the scenes, Saudi Arabia, the dominant Sunni state in the Gulf, will have encouraged the Emiratis to take the first step

Time will tell how quickly other Gulf states will follow. These Arab fiefdoms will be assessing fallout before taking action themselves.

Among the principal aims of US Middle East policy since President Donald Trump came to power has been to broker improved ties between Israel and America’s Arab allies in the Gulf.

This has been part of a wider Trump Middle East peace plan to bring about the “deal of the century”, as the president calls it, that would end decades of conflict between Israel and the Palestinians.

Trump officials believe Gulf states could be more fully engaged in exerting pressure on Palestinians to make concessions that might enable progress towards such a deal.

The UAE and its fellow Gulf states have been among principal donors to the Palestinian movement over many years. Their funding, for example, helped establish and sustain the Palestine Liberation Organisation.

However, times change. Oil-producing Gulf states have much less money to splash around given the demands of their own expanding populations. The collapse in oil prices has not helped.

Where does this leave the Palestinians?

In any case, Arab states more generally have found the Palestinian issue increasingly a distraction from their immediate concern of keeping Iran at bay.

By and large, these states paid lip service in their criticism of the Trump “deal of the century” when it was unveiled in January. Previously, their reaction would have been one of outright rejection.

In summary, the peace plan demanded the Palestinians set aside their long-held dream of a Palestinian state. Instead, they were asked to accept semi-autonomous enclaves in Israeli-controlled territories more or less in perpetuity

Needless to say this was rejected.

All this leaves the much-weakened Palestinian movement in a bind. The UAE’s decisions will be viewed by its leaders as one more betrayal of their cause in a long list going back to the Balfour declaration of 1917. In that declaration, Britain promised the Jews a homeland in Palestine.

The question for the Palestinians in light of what is effectively and conspicuously a collapse in Arab solidarity in rejection of Israel is what options might be available to them.

Initially, Palestinian reaction has been to decry the UAE’s actions. The Palestinian ambassador to the UAE has been recalled.

However, these sorts of responses don’t amount to a sustainable long-term strategy for a movement that is both divided and tired. What would seem to be required is a closing of ranks among Palestinians under a younger, more dynamic leadership.

It is long past time for vestiges of the PLO’s historic leadership to move aside to be replaced by a new generation.