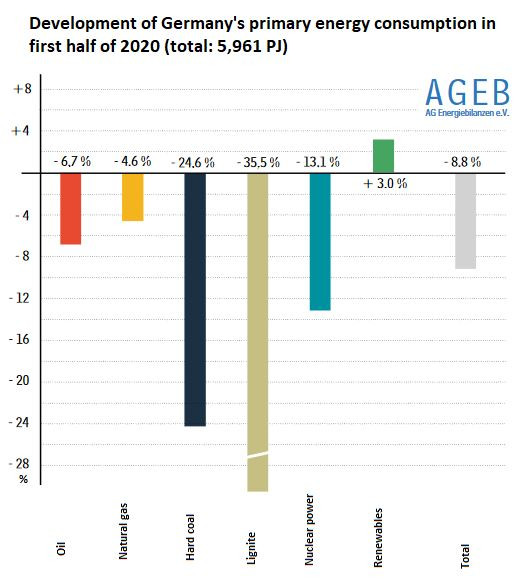 ( Clean Energy Wire) – An abrupt halt to economic activity and greatly reduced mobility in reaction to the coronavirus outbreak have let Germany’s energy consumption plummet in the first half of 2020. While all fossil fuels and especially coal experienced a sharp drop in demand, energy produced with renewables increased its share and absolute output in the country’s energy system. Market research group AGEB says that energy demand for the entire year could drop by up to 12 percent if the pandemic leads to another economic lockdown situation.

The lockdown of the German economy and other effects caused by the coronavirus pandemic will likely lead to a decline of between 7 and 12 percent in the country’s annual energy demand, according to estimates by energy market research group AG Energiebilanzen (AGEB) based on figures in the first six months of the year. The higher figure will be likelier should Germany order another lockdown in case of a significant resurgence of coronavirus infection numbers, whereas if the pandemic is largely kept under control, a more moderate single-digit reduction is likely, AGEB stated.

Between January and July, the country’s energy demand dropped by nearly 9 percent compared to the previous year to 5,961 petajoules. “The coronavirus pandemic is primarily responsible for the receding consumption,” AGEB said, adding that favourable weather conditions also helped bring down demand. While all fossil fuels were used less, two-thirds of the total reduction in consumption was due to falling coal power use, with hard coal contracting by 25 percent and lignite by more than 35 percent compared to the previous year. This means that CO2 emissions in the energy sector will likely shrink by 13 percent in the first half of the year and between 10 and 17 percent for the whole year, the researchers said.

“This development is mostly due to a much higher feed-in from wind and solar power installations as well as a greater use of natural gas for power production.” Moreover, several lignite plant blocks were taken offline and moved into Germany’s power security reserve. The use of coking coal for industry purposes also dropped by nearly 20 percent due to reduced production. Oil use dropped 6.7 percent through the end of June and natural gas by 4.6 percent. Nuclear power production dropped by about 13 percent due to the shutdown of a plant at the end of last year.

Thanks to the drop in fossil fuel use across the board, the share of renewables in Germany’s total energy consumption grew by 3 percent in the first half of 2020. Wind, solar, biomass and hydropower contributed 17.5 percent to primary energy consumption. Lower power demand and an unprecedented drop in natural gas prices also changed the power mix in other European countries, AGEB added. Germany’s negative power trading balance therefore was much lower in the past half of the year than in 2019, meaning that Germany’s power imports grew significantly while power exports fell.