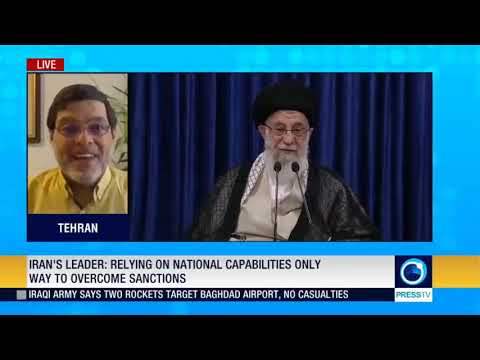 There aren’t many foreign policy breakthroughs to be had nowadays. Iran is one of the few.

A Pew Research Center poll earlier this year found that a majority of Americans fear that Trump’s belligerent approach to Iran has raised the likelihood of US military conflict with that country. 53% of Americans don’t trust what Trump has to say on Iran, which seems to me quite extraordinary. And a plurality thinks that Trump has made the US less safe with regard to Iran.

So a breakthrough that alleviated some of these palpable fears, who knows, might do Trump some good.

Khamenei says he can’t have it.

Moreover, he isn’t particularly afraid of an America with the massive problems it now has, of government incompetence in the face of the coronavirus, massive unemployment, and racism.

In his speech on the occasion of Eid al-Adha, the commemoration of Abraham’s willingness to sacrifice his son to God, Khamenei urged Iranians to defy Trump’s economic strangulation of their country.

He called the US sanctioning of Iran a “great crime.” He said that the sanctions were only on the government in appearance and actually targeted the people of Iran. He said that Trump wanted to destroy the Iranian economy in hopes of overthrowing the government and sowing chaos. America, he said, also wished to destroy the links between Iran and Middle Eastern resistance movements.

“America’s discourse with us is this: relinquish your nuclear industry completely, diminish your defensive capabilities, and to abandon your regional capabilities.”

He said that even if Iran met all of Washington’s demands, that would just encourage the insatiable American elite to start making new demands.

He noted the lessened necessity to negotiate with the US, given its current problems, which, he said, dwarf those of Iran. He pointed to the signs of poor governmental capacity in the US government’s response to the coronavirus, and the turn inward of the US public. He spoke of the growing and extraordinary class inequality in the US, and racial divisions, and 35 million unemployed.

He said, “That old man who is no president in America seems to have benefited from negotiations with North Korea somewhat, and did propaganda. He wants to benefit, nowadays, with regard to the elections and in other ways, and is seeking his personal benefit.”

He dismissed the idea of new negotiations. “They won’t,” he said, “lead to any result.”

PressPlus (Iran): “Ayatollah Khamenei rules out any letup in resistance to US”