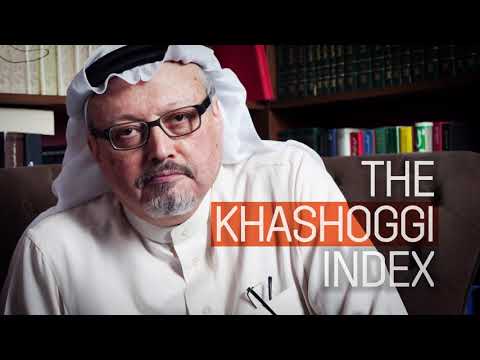 Ann Arbor (Informed Comment) – Murdered Washington Post columnist Jamal Khashoggi was killed by the Saudi government for working for democracy in the Middle East. His brainchild was Democracy for the Arab World Now or Dawn, which he envisaged as an organization that would bring together expatriate activists from the Arab world to put pressure on the seedy dictatorships and autocracies.

Thugs from the circle of crown prince Mohammed Bin Salman of Saudi Arabia were dispatched to the Saudi embassy in Istanbul, where they grabbed Khashoggi when he came in for some routine paperwork, suffocated him to death, and then cut up his body with a bone saw, to be smuggled out of the embassy and secreted so that Khashoggi does not even have a grave.

On Tuesday, friends and supporters of Jamal Khashoggi launched DAWN publicly, with a web site, op-eds, and a major press conference.

I’m proud to be one of DAWN’s experts and a Non-Resident Fellow of the organization.

DAWN’s team of analysts and researchers, many from the region, are led by Executive Director Sarah Leah Whitson, a long-time human rights activist formerly at Human Rights Watch.

The initial research focus will be on Egypt, Saudi Arabia and the United Arab Emirates. All three are extremely close to Washington and so a US-based organization may have an important voice here. All three have imprisoned large numbers of prisoners of conscience.

There are more egregious actors in the region, especially Syria, but Syria doesn’t care what Americans think and the US has little leverage there other than the application of sanctions, in which it is already engaged.

The organization will gradually expand its coverage to the entire Arab world, and perhaps even to other countries in the Middle East.

DAWN says about itself:

“As a US-based organization, DAWN focuses its research and advocacy on MENA governments with close ties to the United States and the military, diplomatic, and economic support that the US provides these governments, as that is where we have the greatest responsibility.

We believe that we can have the most impact by convincing the US government and other international entities, including businesses, to uphold their human rights obligations by ending support for abusive and undemocratic governments in the region.

In performing our mission, DAWN will serve as a resource and a database for comprehensive information about human rights violations, focusing on particularly egregious cases of detention. We will also endeavor to expose and hold accountable government officials responsible for abuses, be they judges, prison guards, interrogators, agents, security officials, or the rulers of their countries, as well as foreign governments aiding and abetting abusive governments in the region. We will seek to develop policy recommendations for reform of abusive governments and reform of US and other international foreign policies that support abusive governments.”

Democracy for the Arab World Now