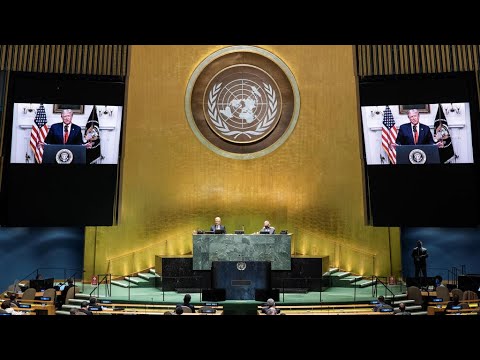 Ann Arbor (Informed Comment) – French President Emmanuel Macron declared independence of the United States and of China for Europe at the UN General Assembly on Tuesday, in the starkest “third way” bid for a French president since Charles De Gaulle withdrew from the military wing of NATO in 1965 and established France’s own nuclear deterrent or force de frappe.

He said that the world cannot get caught up in the US rivalry with China, and that “multilateralism is not solely an act of faith, it is an operational necessity.”

He said that Europe will not accept being reduced to “sad spectators.”

France, Germany and the UK are rejecting the Trump position that all 2007 UN Security Council sanctions, which were lifted in 2016, will now be enforced by the United States despite the UN Security Council’s refusal to recognize US standing to do so.

Macron offered a trenchant critique of the Trump administration’s trade and financial blockade on Iran, termed by Washington “maximum pressure.” Macron said in his speech that from his first appearance at the UN he has

“expressed my conviction, on the Iran subject, that the strategy of pressure on the Iranian nuclear question can only lead to an increase of tensions in the region if it does not possess, at base and before all else, a clear view toward a diplomatic solution.”

These are my translations. But let me break in here to comment. The US has virtually halted Iranian petroleum sales, which had amounted to 2.5 million barrels a day back in 2017, but are now down to a few hundred thousand barrels a day. Much of that is probably smuggled out to China. The US has crashed the Iranian currency, harming those Iranians who depend on imported goods, including medicine.

Macron thinks what Trump and Pompeo are doing to Iran, economically strangling it, is useless because there is no end game. Trump, he implies, is like a kidnapper who has taken his hostage, but doesn’t know exactly what ransom to demand. It is almost as though the hostage-taking was viewed inside the beltway as an end in itself. Any experienced negotiator in a hostage situation will tell you that the worst nightmare is screw-ups who don’t know exactly what their demands are or who don’t ask for anything that can realistically be delivered.

“In 2018, after the American withdrawal from the 2015 Vienna accord, I proposed a thoroughgoing framework permitting the preservation of the JCPOA [Joint Comprehensive Plan of Action, i.e. the 2015 nuclear deal], and allowing it to be supplemented by an enlarged approach that would allow treating questions posed by the Iranian nuclear program after 2025, the role of Iran in regional crises, and its ballistic missile program.”

Macron was exasperated that no one took him up on his plan.

“Where are we today? To the American strategy and to the European, Russian and Chinese determination to preserve, for their part, the Vienna Accord of 2015, Iran has responded with a strategy of maximum pressure on its regional environment.”

He seems to have been tweaking Trump, using “maximum pressure” not for what the US is doing to Iran but for how Iran is playing its response. He pointed to the attacks on the Saudi Abqaiq refining facility on September 14 of 2019 as a game-changer. And since then, and right up to the present, he said,

“the risk is that of a conflagration based on a miscalculation or of an out-of-proportion response. Peace is at the mercy of any incident that escalates, and the consequences for the entire region and beyond are far too serious for us to resolve to live on the brink of this abyss.”

Macron is being polite about it, but what he is saying is that Trump’s irrational stranglehold on Iran threatens to blow up the Middle East and to inflict enormous harm on Europe itself. From the vantage point of Paris, Trump has put Iran in a pressure cooker and then plugged up the safety valve and turned up the heat. At any point there could be a massive explosion, and there already has been one at Abqaiq.

Macron put forward a plan to resolve the impasse through negotiations between the United States, the remaining signatories of the JCPOA, and Iran. The purpose of these talks would be:

1. There must be complete certainty that Iran will never have a nuclear weapon.

2. A way out of the Yemen crisis

3. A regional security plan that will cover the other crises in the region, including challenges to the maritime security of shipping.

4. Finally, the lifting of economic sanctions.

Macron said he is the last thing from naive and doesn’t believe in miracles, but he does believe that countries can have the courage to build peace.

What I would say in reply is that the JCPOA is already a framework that prevents Iran from getting a nuclear weapon. The perpetuation of those measures past 2025 is a reasonable diplomatic goal, but it would have been easier if Iran already had sanctions relief. A France with a big Peugot automobile plant in Iran could threaten to relocate it out of that country and take away thousands of jobs if Iran did not extend UN inspections past 2025. But right now Europe has no leverage on Iran, because it is de facto participating in Trump strangulation of that country. European firms fear US Treasury Department sanctions.

The Obama administration was careful to avoid tacking issues like Syria or Yemen on to the nuclear accord, and Macron is unwise to do that now. The nuclear stuff is complicated and contentious enough on its own. Moreover, the Saudi-UAE propaganda that Yemen is all about a large-scale direct Iranian intervention is false to begin with, and Iran couldn’t order the Houthi rebels to stand down if it wanted to.

And I don’t think lifting economic sanctions can come at the end this way. They have already been lifted in international law with the JCPOA. One man, Trump, reimposed them, and 500 million Europeans were made to dance to Trump’s tune.

If Macron wants to implement his ideals practically, he is going to have to find a way to trade with Iran while protecting French firms from the US Treasury Department. That won’t be as easy as giving a UN speech.

France 24 English: “World should not be dominated by US-China ‘rivalry’, Macron tells UN”