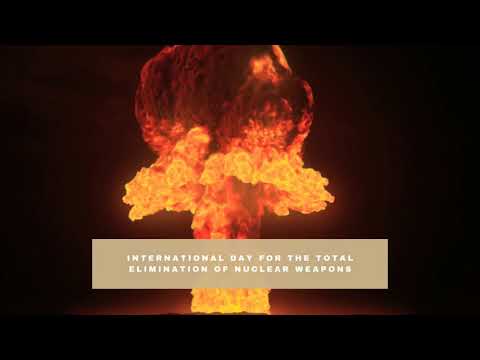 Southwest Harbor, Maine (Special to Informed Comment) – Perhaps because last Saturday was devoted to the future makeup and judicial course of the US Supreme Court and its possible role in the transition of power hardly anyone noticed that this day was International Day for the Total Elimination of Nuclear Weapons. That is a shame because the dangers posed by nukes are only growing and may persist under a Biden Administration.

This past winter President Trump made his entry into the nuclear weapons contest by promoting a new bomb designed to counter what it calls a Russian misconception of an exploitable “gap” in U.S. nuclear capabilities. By deploying missiles at sea with a lower nuclear yield, or destructive power, the administration aims to dissuade Moscow from thinking it could “win” a war in Europe, for example, by firing its own low-yield nuclear weapon first, forcing Washington and its NATO allies to either commit to full-scale nuclear war or capitulate.AP Feb 3

What a Biden Administration will do in the nuclear arena is hard to determine now, but the Obama Administration crafted a 30 billion dollar per year “modernization” of US nuclear arms. Nor has any US President ever committed to a no first use pledge.

All the talk of dissuading Moscow from thinking it could win a war assumes the planners on both sides are rational actors who know the intentions and capabilities of their counterparts Planners operate within a political and social context that may overrule any measured decision. Remember the language of better dead than red from the sixties.

What about the fog of war. Planners might consult the greatest of all military historians Thucydides. “From this moment the Athenians fell into great disorder and did not know where to turn. Indeed it was hard to find out from either side exactly how things happened.

Nor is war perfectly symmetrical. Russians may have been on to other modes of war, such as cyber attacks. Will US planners put aside their purported reluctance to use nuclear weapons if they are virtually disabled by a cybernetic attack.? And what will such an attack do to our nuclear communications infrastructure?

Will arms control agreements, which essentially limit who can be in the nuclear club and how many and where these weapons may be deployed, reduce the risk of nuclear war? Or are such agreements at least a step on the road to complete disarmament?

One might imagine the contemporary nuclear policy choices as the wild West (Trump) or managed competition (Liberal Democrats), That competition however, is stacked and continually incentivizes the wrong behavior. Richard Falk argues:

“…arms control seems to have as its primary goal bringing as much stability as possible to a structure of world order that is presumed to be nuclear armed. It also has a secondary seldom- avowed goal of providing an instrument useful in the conduct of foreign policy. It allows some nuclear weapons states to take tactical advantage of their posture of nuclear superiority when confronting one another or of positing nuclear threats, especially against non-nuclear hostile countries in confrontational situations.

In contrast, the advocacy of nuclear disarmament believes unconditionally that the only safe and decent course of action is is to do everything possible to get safely rid of nuclear weaponry as soon as possible.”

Arms control may seem the more practical course, but much historical experience gives no confidence that these agreements lead to disarmament. In addition they create incentives for mid range non- nuclear states to seek nuclear weapons capability. As for the realism of disarmament efforts, the International Campaign to Abolish Nuclear Weapons (ICAN) points out that two former nuclear armed states have given up their arms and several others have ended efforts to develop nuclear weapons capacity. Rather than judging the realism of disarmament let’s build on these successes.