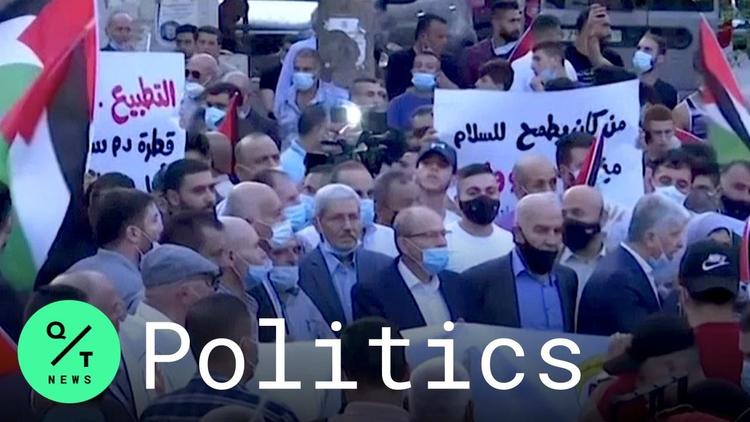 Belfast (Special to Informed Comment) – The normalization deal between UAE, Bahrain and Israel came as a culmination of years of talks. Regardless of the timing of the announcements ahead of the American presidential election to shore up the fundamentalist Christians support to a morally bankrupt president, the implications for the Palestinians could be huge.

Protests against the deal erupted in Gaza and the West Bank, where demonstrators carried placards denouncing it as “the normalization of Apartheid.” One Palestinian described the accord as “a great treason” while another said of Bahrain and the United Arab Emirates, “they sided with the oppressor against the oppressed.”

The Palestinian Prime Minister, Dr. Mohammad Shtayyeh, said, “we will continue relying on the strengthen of our people and leave those who lost their way and surrendered behind our back”. The Palestinian leadership took one step in the right direction by announcing the establishment of a Unified National Leadership.

While it used to be the case that any Arab regime that made any deal with Israel would have been shunned by the rest of the Arab world, now the situation is different. When former Egyptian president, Anwar Elsadat, signed the Camp David Accord with Israel in 1978, the League of Arab States suspended Egypt membership and moved its headquarters from Cairo to Tunis.

In contrast, the same Arab League rejected a Palestinian demand to condemn the UAE-Israel deal. This is despite mass opposition in the Arab world against such deals with Israel, a country that was built by colonial powers in the heart of the Arab world after most of the Palestinians were ethnically cleansed and forced to live in refugee camps in neighboring countries and in other parts of the world, and despite Israel’s history of wars on various Arab countries and the occupation of their land.

The accord imposes a new reality for the Palestinians. Most of the Arab dictators see Israel as the gateway to the White House and keeping Israel happy is crucial for their survival against the wishes of their people. Equally, Israel will always oppose democracy in the Arab world and will use its influence to prevent any potential for democratic transformation and, therefore, blocking the Arabs’ socioeconomic, cultural and political development. For example, Israel wasn’t happy about the US allowing peaceful demonstrators to overthrow the former Egyptian dictator, Mubarak in 2011.

There are also potential economic consequences for the Palestinians. The Arab Gulf countries are crucial for financing the Palestinian Authority (PA). The Oslo Accord signed between Israel and the late Palestinian leader Yaser Arafat in 1993 ensured the continuation of PA financial dependency. The Oslo process, however, enabled Israel to weaken and control the Palestinian economy and to use it as a tool to continue land theft and ethnic cleansing. The Accord has also been used by Israel as a way of improving relations with the Arab and the Muslim worlds, despite violating all the promises the Israeli government made of a two-state solution, an end to Palestinian statelessness, and withdrawal from the West Bank. Arab dictators happily used it as an excuse to accept Israel courtship.

What applies to the PA also applies to the different Palestinian factions. Self sufficiency is a key for them to live for their commitment to their cause and people. Unfortunately, their divided loyalties to different governments means that allowing others to interfere in internal Palestinian politics. This means that what these factions say or do might reflect the interests of these governments not the Palestinians. This could enable Israel to indirectly have influence over what the Palestinian factions can do.

Unity and ending the political divide is the single most important issue for the Palestinian people. Unity would give the Palestinian factions more credibility with their people and will strengthen them in the face of the Israeli oppression. This will not be easy to achieve as other governments that meddle in Palestinian politics can veto any possible Palestinian national unity.

There is also a need to focus on the daily needs of the Palestinians and what needs done to help their steadfastness on their land. Palestinian politicians need to give this goal priority instead of cracking down on journalists and political activism at the universities and the security coordination with Israel.

While some Arab dictators loyal to America decided to publicly normalize with Israel when it still killing Palestinians, demolishing their homes and treating them inhumanely, it is important that the Palestinians connect with the Arab masses who see themselves as part of the struggle against Israel’s policy of keeping Palestinians stateless and without basic rights, and who therefore continue to oppose normalization. This is important as Israel seeks to isolate the Palestinians.

The PA also needs to pay more attention to the daily violations of Palestinian human rights by Israel. It also needs to ignore Trump threats and raise these issue with the appropriate organizations such as the International Criminal Court and others.