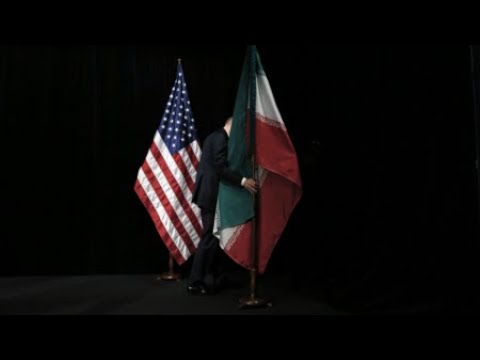 Ann Arbor (Informed Comment) – The Trump administration is running the same scam on the public that George W. Bush & Co. ran on Iraq in 2002.

Some creepy Trump swamp creature emerged to whisper anonymously in the ear of Reuters, which should be ashamed of acting as its stenographer: “The unnamed official told Reuters news agency that Iran may have enough fissile material for a nuclear weapon by the end of the year and that Tehran has resumed long-range missile cooperation with nuclear-armed North Korea. He did not provide detailed evidence regarding either assertion.”

Then the The Independent not only picked up the unsourced and ridiculous allegation from Reuters, but added the breathless headline “Iran ‘to have nuclear weapon by end of year,’ as more sanctions drawn up by US.” The headline was even worse than the original lie, since “may have” does not equal “to have.” The Independent story was then picked up with the idiotic headline by Yahoo News.

The Independent is 30% owned by a Saudi Arabian investor. Saudi Arabia wants to send US boys to fight in Iran and take down the ayatollahs for Saudi purposes. Washington elites have shown that they are perfectly willing to bend over and be used by wealthy and unscrupulous warmongers, domestic and foreign.

The reason the assertion is ridiculous is that having a nuclear weapon does not depend solely on how much uranium you have. There are lots of uranium deposits in mountains that anyone can mine and break into rocks. You could have a mountain of those rocks and they would never blow up because they are mostly U-238, which, well, doesn’t blow up.

In amongst the U-238 there is some U-235, which is the volatile one. In nature, it is less than one percentage point of natural uranium. Again, you can have masses of uranium rocks that have this fissile material in them, and you could never ever have a bomb. So “how much” fissile material Iran has is completely irrelevant.

You can also enrich uranium to 3.5% U-235, which will fuel nuclear reactors.

And, you can enrich it to 19.5% U-235, which will fuel medical reactors that make isotopes for treating cancer.

That is all Iran has been doing. The 2015 Joint Comprehensive Plan of Action (JCPOA) or nuclear deal limited Iran to enriching to 3.5% for its nuclear power plant at Bushehr, which makes electricity by using uranium to boil water to turn turbines. Two more such plants are being built, and they will need fuel, so any stockpiles won’t go to waste.

Iran agreed to that limit in order to get sanctions relief from the UN Security Council and from the US.

The US never really did stop its sanctions on Iran, because the GOP Congress kept them on, and then in May, 2018, Trump breached the JCPOA, which the US had signed, and slapped the harshest sanctions on Iran ever applied by one country to another outside actual warfare.

So Iran gave up 80% of its civilian nuclear enrichment program and not only did not get the end of sanctions, it got hugely increased sanctions. Those are third party sanctions run by the Washington mafia. If a French firm did business with Iran (perfectly permitted in international law), the US Treasury Department would fine it billions and bankrupt it. Iran was screwed over big time.

So to put pressure on Europe to buck the arbitrary US sanctions (which were ordered by one man, Trump– not even Congress was involved), Iran has been acting out, violating the JCPOA rules in minor ways. For instance, it started enriching to 4.5%. It really is just a symbolic protest. You can’t do anything special with uranium enriched to 4.5%. I wouldn’t spend a lot of time around it, it could give you cancer. But it never in a million years would blow up.

The knowledge of how to get to 95% and then to use the resulting material to make a bomb is highly specialized and Iran likely doesn’t have it. Moreover, Iran can’t enrich to 90% because it is still under regular United Nations Atomic Energy Agency inspections.

Enriched uranium signatures are powerful and if you produce them, you can’t hide them from inspectors by dusting a bit and spraying some air freshener.

“My report on Verification and monitoring in the Islamic Republic of Iran in light of United Nations Security Council resolution 2231 covers our activities in the last few months in verifying and monitoring Iran’s implementation of its nuclear-related commitments under the Joint Comprehensive Plan of Action.
The Agency continues to verify the non-diversion of nuclear material declared by Iran under its Safeguards Agreement.”

Iran does not have a nuclear weapons program and hasn’t done any of those sorts of experiments since 2003. The IAEA confirms the lack of diversion to military purposes. Iran even let the IAEA inspect a site that wasn’t on the JCPOA list this month.

The countries always grousing about Iran using uranium to boil water at its electricity plants are themselves up to their necks in atomic bombs. Israel has several hundred. The US has thousands. Saudi Arabia funded the development of the Pakistani bomb. So making bombs doesn’t actually seem to be viewed as bad if you make them; it is only bad if they other guy does.

All this science fiction talk of an Iranian bomb by the end of the year, which is galactically laughable, reminds me, as I said, of the Bush propaganda machine on Iraq.

Then vice president Dick Cheney alleged that Iraq was two years away from having a nuclear bomb. National Security Adviser Condoleezza Rice, said that we don’t want the smoking gun to be a mushroom cloud. Bush told congressmen in October of 2002, in order to bamboozle them into letting him go to war, “If the Iraqi regime is able to produce, buy, or steal an amount of highly enriched uranium a little larger than a single softball, it could have a nuclear weapon in less than a year.” This was not true and its premises were the height of absurdity. Secretary of Defense Donald Rumsfeld said that Iraq’s “weapons of mass destruction,” a term aimed at conflating some old mustard gas canisters with the hydrogen bomb, “the area where weapons of mass destruction were dispersed. . . We know where they are. They’re in the area around Tikrit and Baghdad and east, west, south and north somewhat.”

All of these assertions were not only untrue but known by their speakers to be untrue. They lied to us.

Trump will run the same playbook, of the Big Lie. The Nazi propagandist Goebbels said that even a big lie, if repeated often enough, begins to be taken for the truth. Trump has refined the master, adding that an oft-told Big Lie can also be bolstered by 20,000 little lies. A whole alternative reality can be created for 43 percent of the public this way, if the slimy Rupert Murdoch will lend his Faux News to the task and if corrupt billionaires like Robert Mercer and Sheldon Adelson will fund it.

But back in the real world, I’d check with Rafael Grossi if I were Reuters or AP or The Independent.

CGTN: “Washington claims all UN sanctions back in effect”