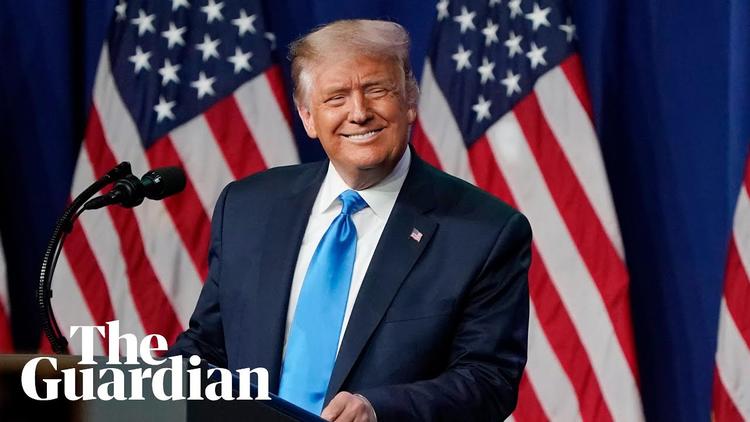 The 2016 Republican National Convention was filled with chants of “lock her up” and “build that wall,” packed with fear-mongering and often openly racist messages.

The 2020 convention has clearly been designed to convey a different message, highlighting speakers of colour and showcasing U.S. President Donald Trump’s pardons and his granting of citizenship to people of colour.

As someone who studies racist rhetoric, I find this version even scarier than the previous one.

For several years now, I have been especially interested in what I call “racial fig leaves,” utterances or actions that work to prevent people from recognizing the racism in front of them.

I use the term fig leaves because they serve to just barely cover something you aren’t supposed to show in public. Fig leaves are needed because most white people don’t want to think of themselves as racist. Fig leaves work because some white people are so keen to convince themselves that something apparently racist really isn’t racist after all.

In Trump’s famous comment about Mexican rapists, he went out of his way to indicate that he wasn’t talking about all Mexicans, and that some Mexicans are good people. These incongruous additions to the diatribe serve as fig leaves for those who falsely believe you can only be racist if you condemn all members of a group.

As I studied online discussions among Trump followers, I saw them making precisely this case to one another, to convince themselves that Trump wasn’t racist.

A litany of racist conduct

Now turn to where we are now. Trump as president instituted a Muslim ban, albeit after some changes to get it past the courts. He locked immigrant children in cages. He quoted a violent segregationist, calling for the shooting of peaceful protesters seeking racial justice. He told four congresswomen of colour to go back to where they came from. And that’s just off the top of my head.

And now, after all this, Trump and the Republican party chose to feature Black Republican Sen. Tim Scott and former UN ambassador Nikki Haley, of Indian descent, along with other Black and brown speakers, to showcase their apparent embrace of people of colour.

Trump’s high-profile pardon and naturalization ceremonies at the White House are also aimed at showing his ostensible benevolence toward people of colour.

These are attempted fig leaves, probably directed squarely at the suburban voters the party missed out on in the 2018 mid-term elections.

These fig leaves were meant to convince voters that Trump and his party are not racist after all. They may have done some things that seemed alarmingly “racially charged,” perhaps, but in their hearts they were not really racist, as shown by the kindness to people of colour now on display.

But to accept this, you have to accept that locking kids in cages, banning Muslims, telling people to go back to where they came from and calling for the shooting of peaceful protesters demanding racial justice isn’t racist. And that someone can institute these policies and hold these opinions without being racist.

This is what makes fig leaves so dangerous: they have the potential to change our views about what racism is and to make us accept increasingly racist policy and conduct as not racist after all.

The convention wasn’t all fig leaves. There was also actual, blatant racism in the form of Mark and Patricia McCloskey, famed for brandishing guns at peaceful protesters. They worried that Democrats would “bring crime, lawlessness and low-quality apartments into thriving suburban neighbourhoods.” This was surely meant to be what’s known as a dog whistle, using coded language to express the fear that Black people might move into white neighbourhoods.

But in our current circumstances, that message was likely heard loud and clear by all of us. And if anyone failed to catch the McCloskey’s message, it was hammered home again and again in much the same vocabulary by a wide range of speakers.

There was also Trump’s reference to COVID-19 as the “China virus.” There was the use of the phrase “bodyguard of western civilization,” a coded phrase commonly used by white supremacists. Even if you’d missed the last four years and just tuned into the Republican convention, deeming these comments as non-racist would require a shockingly limited definition of racism.

Then there were the choices about what to say and what to ignore. The COVID-19 pandemic, disproportionately killing people of colour, was barely mentioned except as the “China virus” that was now behind Americans.

The protests against police killings of Black people were frequently mentioned, but only as scenes of violence and unrest, not racial injustice — a fig leaf if there ever was one. The killing of two peaceful protesters, allegedly by a Trump-supporting teenager in Wisconsin, as the convention was being held was scrupulously ignored.

Speakers could easily have acknowledged the illegitimacy of shooting an unarmed man multiple times in the back, and they could have easily expressed concern about a heavily armed white teenager who’s accused of murder in the street.

They chose not to.

To fill your convention with utterly blatant racism, as the Republicans did in 2016, is bad enough. But after four years of blatantly racist actions, a convention filled with fig leaves is perhaps even more dangerous. If the fig leaves work, then — for those who fall for them — the perception grows that the Trump administration’s racist actions weren’t really racist after all.

Recognizing racism has never come easily to white people. But if Trump’s actions and words are no longer seen as racist, the fight against hate, bigotry and racial injustice will be harder than ever.

The Guardian: “A dark agenda at the heart of the Republican convention’s first day”