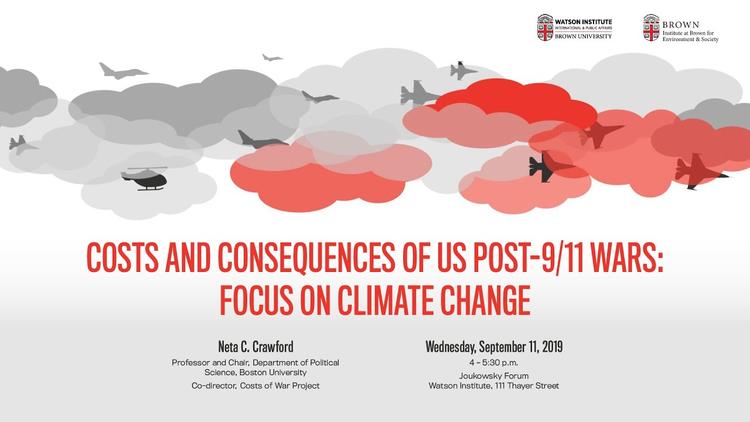 Ann Arbor (Informed Comment) – The Brown University Watson Institute Costs of War Project has put out a report concluding that the US-led “War on Terror” has displaced 37 million people.

While there are parts of the report I agree with, some of the argument seems to me flawed. Let me explain why that is, below.

First of all, lead author David Vine and his colleagues are speaking of US “Post-9/11 Wars,” which is not exactly the same as the “War on Terror.”

The War on Terror is a stupid phrase that I have much criticized. I’m not alone– a Marine general once made fun of it to me when we were taking a walk in the woods together. But surely if it has any meaning at all, it means the fight against al-Qaeda and allied movements. The Congressional Authorization for the Use of military Force of 2002 specifically speaks of movements that planned out the September 11 attacks.

So even if the Bush, Obama and Trump administrations have invoked the AUMF in their various police actions, analytically speaking it does not apply to anti-al-Qaeda movements such as the Houthis in Yemen or the Baathist government in Syria (which in 2002-2003 tortured al-Qaeda operatives for the United States).

So the “War on Terror” would comprise US military actions mainly in Iraq and Afghanistan.

I am all on board with Vine and his colleagues in criticizing the Bush administration war on Iraq. Iraq was not involved in 9/11, and there was no al-Qaeda to speak of in Iraq in 2002. What little there was was being hunted by the Baath secret police. Iraq was not making weapons of mass destruction and delivered to the UN documentation of its destruction of such programs in the late 1990s.

There was no reason for the United States to launch an aggressive war on Iraq, occupy it for 8.5 years, and destroy its main institutions, including the army. These actions led to the rise of ISIL and yet another US intervention.

The study estimates 9.2 million displaced in Iraq by these wars. OK, I can live with that estimate. And I agree that the proximate cause was the US war of aggression on Iraq. That is, many of those displaced were not displaced by the US military, but by Sunni or Shiite militias or the reconstituted Iraqi Army. But, if Bush hadn’t invaded in the first place, none of that would have happened.

So blaming the US for the 9.2 million Iraqi displaced is fair.

Likewise, the US involvement in the Saudi-led war on Yemen is shameful, and the US bears a large share of blame for the 4.4 million displaced there. Although the US is not fighting there, it has refueled Saudi and other bombers, it sold sophisticated military equipment to the belligerents, it has provided strategic advice, and anything anyone says bad about Washington in this regard is richly deserved. Even the Congress has denounced US support for this war, which is like bank robbers denouncing greed, and tells you how awful and fruitless this war is.

As for the US and NATO after 2001, they in my view made an error in trying to stay in Afghanistan after they helped the Northern Alliance overthrow the Taliban in 2001-2002. But that initial campaign does not appear to have resulted in high levels of casualties or displacement. The attempt of Donald Rumsfeld and his successors to stay in Afghanistan helped alienate some of the population and led to a resurgence of the Taliban, which now hold 5-10% of the country and have a presence in half of provinces. This renewed war between the Kabul government and the Taliban has produced thousands of casualties a year, and has displaced millions.

I have no reason to doubt these figures. But it is also true that after the fall of the Taliban and the return of relative peace in some provinces, about half of the 3 million Afghans in Pakistan have been repatriated. So you’d have to say that the US and NATO partially reversed that emigration flow that had been caused by the Soviets. That is, the US permitted 1.5 million Afghans to return home, so if 2.1 million left during the past 19 years, the net outflow is more like 600,000.

Very little US war-fighting in Afghanistan was in Persian-speaking provinces, which were relatively calm. It was mostly in the Pushtun regions where the Taliban were strong. So I just am not convinced that enormous numbers of Tajiks and Hazaras went to Iran because of the ongoing fighting with the Taliban. In fact, many Shiite Hazaras were able to come back home because the Taliban were overthrown (the Taliban had massacred them).

We must remember that Iran is an oil state, which means it has a need for foreign guest workers, and there are now 3 million Afghans in Iran. They are largely Persian-speaking and from provinces that were relatively secure after the Tajik-Hazara-Uzbek alliance came to dominate the country. Many are therefore economic migrants like the Pakistanis who go to the Gulf. There may be advantages to claiming to be refugees as opposed to economic migrants. There is also a tendency toward refugee inflation on the part of governments seeking UN help.

So I’m not sure you could nail down a net foreign displacement at all.

Internally displaced persons of 3.2 million is plausible. But remember that the Taliban and more recently ISIL are responsible for some proportion of them. Unlike in Iraq, where there was nothing much going on before Bush invaded it, the Taliban controlled Afghanistan and were already widely displacing people, so you can’t blame the US for their continuing to do so. Taliban ideology is hard line Deobandi and they hate Shiites, Sufis, Sunni mainstream traditionalists, and Uzbek secularists, and have not scrupled to shoot them or blow them up at will.

I just think that the picture in Afghanistan is much more mixed, both with regard to responsibility and with regard to movements on the ground, than is true of Iraq.

I can’t understand the report’s allegations about Libya. They are reporting 1.2 million displacements. Are they counting everyone who was displaced since the Libyan Revolution of 2011, including those who then went home?

So the United Nations High Commission on Refugees says as of 2020 of Libya: “217,002 people displaced inside the country (IDPs) and 278,559 people who have returned home (returnees).”

There are also some 40,000 refugees in Libya from other countries, many of them trying to make their way by sea to Europe.

Anyway, I just think this part of the report is deeply flawed. The no-fly zone in Libya was not part of any war on terror, it was ordered by the United Nations Security Council. The International Criminal Court found the Gaddafis guilty of massive crimes against humanity. If there had been no no-fly zone, Gaddafi’s armor would have crush Misrata, Benghazi, Bayda and other cities, and would have also produced hundreds of thousands of displaced. We saw in Syria what an entrenched one-party state did to a rebelling population. The same thing would have happened in Libya.

The US role in 2011 was mainly to take out Gaddafi’s anti-aircraft batteries. The sorties flown to stop Gaddafi’s armor from advancing on revolutionaries were by various NATO states. I was in Libya in 2012 and it was fragile but not anything like Syria. Bad things happened from 2014, when militias started controlling politics, but I can’t for the life of me see what the US had to do with that.

As for Syria, that is a really complex situation that I can’t go into here at the length it deserves. But, again, if the US had not intervened against ISIL, then a lot more people would have been displaced by ISIL, and, indeed, ISIL did chase 600,000 Syrian Kurds into Turkey.

Millions were displaced in western Syria by the civil war. It isn’t clear to me that the US was a major player in all that. In fact, people complained about Obama’s reluctance to get involved.

Surely with regard to Syria, the millions displaced must be blamed on the al-Assad regime, on extremist groups like Jabhat al-Nusra, on Hizbullah and Iraqi militias, and most of all on Russia, the fighter jets of which have bombed the bejesus out of Syria. Nobody has done a report on all the people displaced by Russia.

In the end, I think the numbers arrived at and attributed to the US in this report are exaggerated. But even if the actual number of displaced caused by the US is probably closer to 13 million, that is more than the population of my state, Michigan, and is pretty damning in itself.

Watson Institute for International and Public Affairs: “Costs and Consequences of US Post-9/11 Wars: Focus on Climate Change”