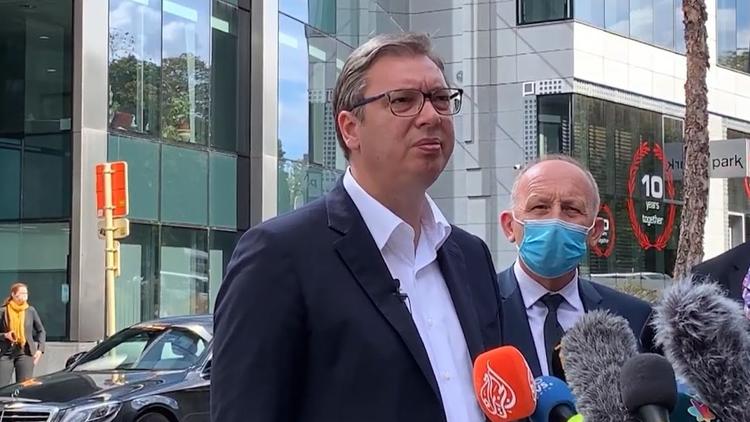 Belgrade (Special to Informed Comment) – Former wartime foes Serbia and Kosovo signed a deal on economic normalization that has very little to do with relations between Belgrade and Pristina, as its main beneficiaries are the United States and Israel rather than local populations in the Balkans. Under President Donald Trump auspices, Serbia’s President Aleksandar Vucic committed in Washington to moving Serbian embassy from Tel Aviv to Jerusalem, while Kosovo’s Prime Minister Avdullah Hoti agreed to mutual recognition with Israel, as well as opening the embassy in Jerusalem, becoming the first Muslim-majority nation to do so.

According to video footage that became viral on social media, Serbia’s President appeared to react with some puzzlement when Trump announced, in the Oval Office, that the Balkan country agreed to move its embassy to Jerusalem in less than a year. Vucic was scratching his head bemusedly as US President spoke, which is why many speculate that Serbian leader apparently did not know what he signed.

Just a few days after the “historic summit” in Washington, the European Union warned Serbia and Kosovo that they could be hurting their chances for EU membership by moving their embassies to Jerusalem. The threat would hold more weight if Serbia had not already been left languishing on the “European path” for two decades and ife all European Union members so much as recognized Kosovo. Still, it is unusual for Brussels so directly to take on both the US and Israel.

The Serbia – Kosovo deal was primarily important to Trump in order to demonstrate at least some foreign policy success. That is why the agreement on economic normalization was signed in Washington, as one of its main goals was to emphasize Trump’s dominant role. In addition, a photograph of Vucic sitting in the Oval Office looking like a naughty schoolboy summoned by the headmaster Trump also became viral, and it said a lot about Serbia’s place in the modern world.

The deal signed in Washington also clearly demonstrated who “the real boss” in the Balkans is. Besides Norway and the Donbass, the so called Western Balkans is the only energy-rich territory in Europe, especially in terms of coal reserves and hydroelectric potential. As natural gas and crude oil become scarce, natural resources in Serbia, Kosovo, Montenegro, Bosnia and Herzegovina and Albania could play a very important role. That is why the region will likely stay in the US sphere of influence, and may never join the EU. Also, the Serbia – Kosovo deal includes the US request for energy diversification, which means that Serbia may have to reduce its purchase of Russian natural gas. That could be one reason that Russian Foreign Ministry spokeswoman Maria Zakharova posted a picture on Facebook of Vucic in the White House, alongside a picture of Stone from the 1992 film Basic Instinct, at a police interrogation where her character briefly exposes herself.

“If you are invited to the White House but your chair stands like you are in an interrogation, you should sit like in the picture number 2. Whoever you are. Just trust me,” Zakharova wrote.

Vucic, on the other hand, said while he was in Washington he “defended Serbia’s close ties with Russia, including an arms purchase, and his refusal to impose Western sanctions against Moscow over its policies in Ukraine”. However, given that Serbia’s President agreed to unconditionally remove the Serbian embassy from Tel Aviv to Jerusalem, it is not very likely that he would have opposed any Trump request that he join in anti-Russia sanctions. In other words, the US likely did not make such requests at all. If it did, Vucic would have broken ties with Russia, just like he agreed to ban Huawei’s 5G technology in Serbia, even though the Chinese company is reportedly heavily involved in a new system of video-surveillance in Belgrade.

Finally, Serbia’s decision to move its embassy to Jerusalem will undoubtedly spoil the country’s relations with Palestine, as well as with the rest of the Arab world. On the other hand, Belgrade will not get any concessions from Israel. In fact, before the “historic deal” in Washington, the Jewish state was among the countries that did not recognize Kosovo. In an exchange of Serbia’s recognition of Jerusalem as Israel’s capital, the Israeli Prime Minister Benjamin Netanyahu recognized the independence of Kosovo, which Serbia still considers as part of its territory. Pristina is also unlikely to benefit from normalization of relations with Israel, and the step may worsen its relations with other Muslim countries after it opens embassy in Jerusalem. Thus, at least in the short-term, the only winners of the Serbia – Kosovo deal seem to be “the most pro-Israel president in American history” and Bibi Netanyahu.