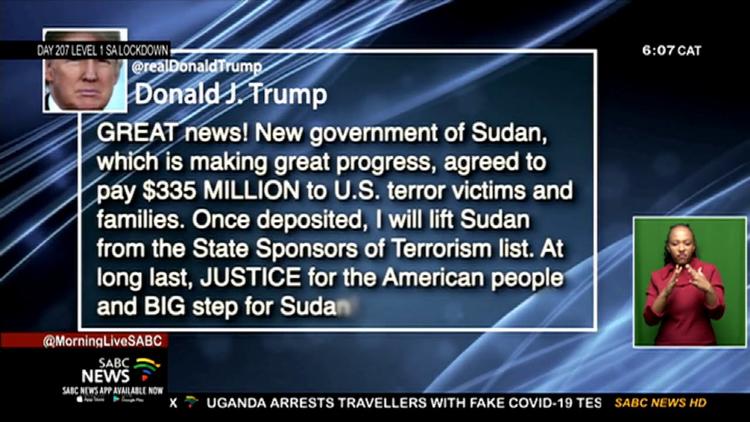 Ann Arbor (Informed Comment) – Sudan’s Prime Minister Abdulla Hamdok announced Monday that the US had agreed to remove his country from the list of international supporters of terrorism, paving the way for Sudan to rejoin the international community and attract desperately needed international investment.

Sudan’s revolutionary government has moved to ensure human and civil rights and to separate religion and state, after decades when the country was ruled by an arbitrary fundamentalist military dictatorship. Why in the world the US waited so long to reward the country for its turn to democracy, impelled by massive street demonstrations, is hard to understand. That the Trump administration kept sanctions on Sudan for a year and a half after the overthrow of dictator Omar Bashir endangered the revolution by impeding any economic progress. The coronavirus and the global shutdown have deeply harmed revolutionary Sudan, as well. If Washington actually cared about democracy, as it keeps saying with regard to Venezuela and its other bêtes noires, it should have rushed to help the new Sudanese government.

AP reports that Trump may have demanded a quid pro quo for this move, insisting that Sudan recognize Israel. Trump thinks a diplomatic breakthrough for Israel will help him with the Jewish vote in swing states like Florida. Some in the Sudanese officer corps have shown a willingness to recognize Israel, but Prime Minister Hamdok is uncomfortable with taking this step now because Sudan only has an interim, transitional and unelected government. He feels such major moves should wait until after elections, so that the government can represent the will of the people (an Enlightenment concept.)

Hamdok called the move the fruit of the April, 2019, popular revolution against dictator Omar Bashir, and praised the martyrs who fell in the streets to rescue their country from the tyrant’s grasp. Sudan under Bashir had been an international pariah. The International Criminal Court at the Hague had warrants out for his arrest over the genocide in Darfur.

Hamdok said in his speech on Monday,

“I congratulate the Sudanese people on this magnificent and well-deserved achievement . . . . our people never for a single day called for or sponsored terrorism.

From the time we took office last year, we began an earnest dialogue with the American administration to remove the name of Sudan from the list of state sponsors of terrorism . . . Today, it came to pass.”

He said that a team of Sudanese experts and negotiators had bargained down the US from a demand for $10 billion to a few hundred million. He said that the public might be wondering where the government could get $335 million, given the country’s dire economic situation. He explained that it came from sales of government gold stores. He said that in the aftermath of the US decision, there was hope that Sudan’s finances could be put on a solid footing, with new and more effective policies.

He added, “The removal of the name of Sudan from the list of state sponsors of terrorism opens the door wide for an affirmation and strengthening of Sudan’s well-deserved return to the international community.”

He said that under sanctions, Sudan had been reduced to dealing with a single bank for its external transactions, but now its finances would be freed.

He said that Sudan is $60 billion in debt, but now will be able to restructure and repay its debt. In particular, he hoped that the US decision would open the floodgates to international and regional investment in Sudan, and that wealthy Sudanese expatriates would now come back and invest in their natal land.

Hamdok serves as prime minister in a hybrid transitional government, part military junta, part civilian representatives of the revolution. The revolutionaries had worked out this cohabitation for a couple years because of the bad experience of Egypt, which went straight to elections after its 2011 revolution against Hosni Mubarak. The Muslim Brotherhood came to power in Egypt in 2012, polarizing the country between nationalists and fundamentalists, bringing millions of protesters into the streets in June, 2013, and destabilizing the country so that it fell back into military dictatorship. The Sudanese revolutionaries, many of them secular leftists, wanted to give some time for political parties to organize and prepare for elections, which may be held in 2022.

The fundamentalist military dictatorship of Bashir had hosted Iranian forces and was sanctioned in 1993. Then he welcomed Saudi terrorist Usama Bin Laden to Khartoum in 1994, when Bin Laden was stripped of his Saudi citizenship and expelled from the country. Bin Laden had opposed the Saudi strategy of offering the US and coalition allies the use of Saudi territory for the Gulf War, in which international forces expelled the Iraqi military from Kuwait. Iraq had illegally occupied Kuwait on August 2, 1990. Bin Laden allegedly had wanted King Fahd to deploy his Arab volunteer fighters against Saddam, given that he believed they had been responsible for the Soviet withdrawal from Afghanistan. King Fahd went with the US armed forces instead.

While in Khartoum, Bin Laden plotted terrorist operations against the US. He went to Afghanistan in 1996, hooking up with the Taliban. But when in 1998 two US embassies were bombed in East Africa, it was Bin Laden’s old Khartoum-based operatives who carried it out. The US thus blamed the Bashir government for having allowed al-Qaeda to operate from its soil, and demanded payment from Sudan of billions of dollars in damages.

Hamdok announced that Sudan would transfer the money immediately. And President Donald Trump tweeted that he would remove Sudan from the list of state sponsors of terrorism.

SABC: “Sudan to be removed from U.S. terror list”