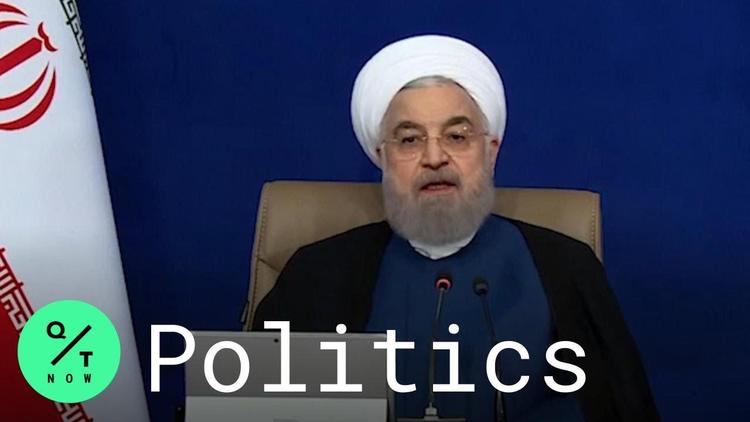 Ann Arbor (Informed Comment) – As the dying Trump administration, literally on a sickbed, contemplates losing power, its hawks are lashing out at Iran in an attempt to ensure that the 2015 international nuclear deal is dead and buried, and that the US and Iran remain on a war footing. Trump’s two main allies in the Middle East, Binyamin Netanyahu of Israel and Mohammed Bin Salman of Saudi Arabia, want at the least a rollback of Iranian influence in the region and at best regime change. They are small countries and have no hope of accomplishing the latter. Only a US war on Iran, repeating the 2003 invasion of Iraq could reliably change the regime and end the country’s civilian nuclear energy program.

The US Treasury Department has blocked financial transactions of 18 Iranian banks, and threatened anyone who does business with them with third party sanctions. This means that if a small French firm wanted to sell toasters to Iran, it can’t use these banks to do so. There really aren’t any banks left in Iran that aren’t sanctioned by the Trump administration. So the message is to Europe, don’t trade with Iran.

This policy is unilateral and is ordered by one man, Trump. Congress has passed no such law. The United Nations Security Council is against these sanctions.

Although the announcement is accompanied by the usual demonization of Iran, these sanctions will make no difference to Syria or Iraq in their trade with Iran and will have no effect on the Iranian role in the Middle East. Nor will they force Iran to cease its civilian nuclear energy program, with which the UN Security Council has made its peace.

The smarmy SecState Mike Pompeo alleges that the US is not sanctioning medical supplies, but this is a half-truth that functions as a Big Lie. Sanctioning all the banks means that the medical supplies can’t be imported because Iran has no way to pay for them.

The relentless Trump attempt to bend Iran to his will has failed for 3 and a half years, and is unlikely to succeed during the three months he has left in office.

The purpose of this new financial blockade on Iran is to hammer the last nail in the coffin of the Joint Comprehensive Plan of Action, the 2015 Iran nuclear deal approved by France, the UK, Germany, China, Russia and the United States. Trump breached the treaty in May, 2018, and is attempting to strongarm the other signatories into reneging on it, too.

Iran mothballed 80% of its civilian nuclear enrichment program in 2015 in order to get total relief from all sanctions. That never happened, because the Republican Congress refused to remove US sanctions, and the US measures threaten third parties. The French automobile firm Renault had had a factory in Iran and planned to restore it, but was dissuaded by US threats of massive fines. The French energy firm Total S.A. had planned to develop Iranian natural gas, but pulled out under US threats.

So Iran gave up most of its latent nuclear deterrence and not only got nothing in return, it got the most crippling sanctions ever applied to one country by another in peacetime.

Iran refuses to go quietly. It has responded to Trump’s economic war on it in several ways:

1. Tehran has made clear that it won’t be strangled while hostile neighbors like the United Arab Emirates and Saudi Arabia prosper. It has launched covert operations that are hard to trace directly back to the Ayatollahs against UAE tankers and the Saudi Aqaiq facilities. The more pain the US inflicts on Iran, the more likely it is that there will be a spiral of violence.

2. Iran has cozied up to China in an unprecedented way. With the world’s second-largest economy and a much faster recovery from the pandemic than the US, Beijing appears to believe it can stand up to the US and avoid sanctions. Some of the trade conducted by the two countries is nevertheless in the form of undeclared oil purchases. The US can’t sanction what it can’t prove. In addition, China can spin off companies that have no dollar assets and do no business with the United States. They can use the piles of soft currency China has accumulated from Asia and Africa in selling its goods to developing countries. For Iran to accept payment in e.g. Angolan Kwanzas is a perhaps 30% loss, since Iran will have to convert them to Euros or another non-dollar hard currency at a discount. But that is still substantially better than doing no business at all. The US Treasury Department can’t sanction firms doing business in currencies other than the dollar and which do no trade with and have no assets in the US.

3. Iran has found other countries to do business with that have already been cut off and sanctioned by the US, such as Venezuela. This development demonstrates why broad sanctions are a blunt tool with ever-decreasing returns. Iran has offloaded three tankers worth of natural gas concentrates at Venezuelan ports in the past month. The concentrates are used in refining raw crude into gasoline, and Venezuela has little natural gas of its own. It used to get the concentrates from the US, but has been cut off. So, US sanctions on one country helped undermine US sanctions on another. The US has attempted to stop this trade by engaging in piracy on the high seas and confiscating Iranian tankers, but they have gotten wise and have turned off their satellite communications, making it difficult to track them.

4. Iran has stood its ground. It seems to be forcing the US out of Iraq successfully. Trump just announced all US troops will leave Afghanistan by the end of the year. Tehran will celebrate that it is no longer surrounded by the US military. Iran shows no sign of abandoning its diplomatic and military position in Iraq, Syria or Lebanon. (The Saudis would add Yemen but I don’t think Iran gives any significant amount of money to the Houthi rebels there).

Still, the Iranian currency has collapsed against the dollar, and oil income has fallen from over $100 bn a year to more like $7 bn (non-oil exports are now much larger, over $30 bn a year). The people are under severe economic pressure. The regime is cushioning itself with smuggling to China and Venezuela.

The Trump strangling of Iran could well produce a war. The new sanctions are intended to destroy completely the 2015 nuclear deal, making it impossible for the Europeans to salvage it.

Without that safety valve, a war could be the only response left.

Is Trump attempting to bequeath an Iran conflict to Biden, as a poison pill?

Bloomberg: “Iran Warns it Will Respond to U.S. Sanctions Threat”