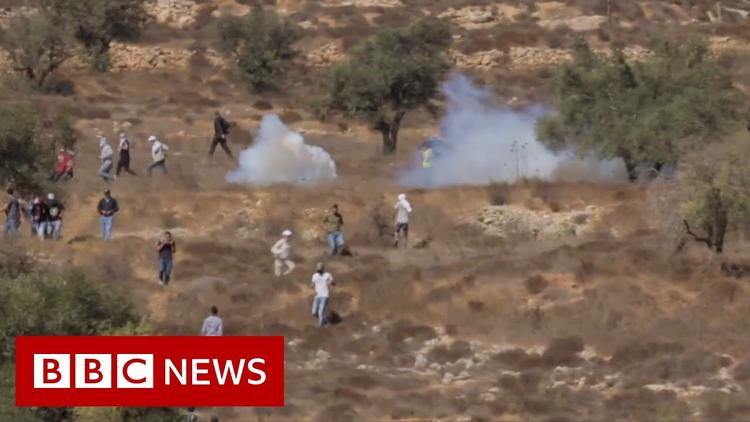 Belfast (Special to Informed Comment) – In the village of Jaba in Bethlehem district this month, Israeli squatter settlers chopped down and destroyed 300 olive trees.

October is the olive harvest month in Palestine. This emblem of peace, however, is under attack by illegal extremist Israeli squatter settlers who carry out their attacks under the protection of the Israeli army. These attacks escalate during the harvest season due to incidents of olive theft and physical attacks on Palestinian farmers by the settlers. This year is no different. In addition to the incidents mentioned above, there were many others. Four Palestinians who were harvesting olives were injured after they were attacked by Israeli settlers in the village of Burqa in Ramallah area. In another incident, an Israeli settler was filmed stealing Palestinian olives in Huwarah near Nablus.

Palestinians plant 10,000 new olive trees in the West Bank every year. So far this year, Israeli settlers are estimated to have destroyed 4,000 of them.

Every October, the whole family gets together and go to their land to hand-pick the olive the traditional way where they also enjoy having their food in the fresh air. Speaking from personal experience, it is one of the most enjoyable things I ever did. Most of the harvested olive is used to produce olive oil which is a source of income for many Palestinian families. The rest is pickled at home. Olive oil soap is the main traditional local industry linked to olive. The wood is used either for heating or decoration craft

In Palestinian culture, the olive tree is not only a source of food and income. It is also an important element of our cultural identity. Some trees date back to the Roman era and called Roman olive. One tree in Bethlehem which could be the oldest in the world is estimated to be 5500 years old as if it has been in Palestine as long as the Canaanites themselves. The olive tree is also used in poetry, folk and patriotic songs as well as a symbol for the Palestinians steadfastness, resilience and their attachment to their land as if they are rooted in it like an olive tree. The olive branch is a symbol for peace as well.

Instead of preventing the settlers’ violence, the Israeli army were filmed attacking journalists who were covering the attack on Palestinian peasants. Not only that but the Israeli authorities are also no different to the settlers in their attacks on Palestinian farming land including uprooting trees, restricting access to the land, preventing importing fertilizers to improve the harvest and confiscating Palestinian land to build illegal Israeli settlements. According to the Palestinian Return Center, there are about 750,000 illegal Israeli settlers living in Jewish-only settlements across the occupied Jerusalem and the West Bank on land stolen from the Palestinians by Israel against the International Law and the Fourth Geneva Convention.

To put things in context, according to the UN, about 57 percent of cultivated Palestinian land is used for olive trees. There are about 8.9 million trees in the Occupied Palestinian Territories. The olive make up15 percent of the agricultural income which accounts for 5.5 percent of the Palestinian GDP. It is also estimated that more than 800,000 olive trees have been destroyed either by the state of Israel or by Israeli settlers. This frequently quoted figure, however, is more likely to be higher by now as the UN relied on the figures published by the Palestinian Ministry of National Economy and Applied Research Institute in 2011.

The immediate aim of such attacks is to terrorize the Palestinians from attending their land which deprives them of a source of income. But for the long run, as the Palestinians become increasingly afraid of attending the land in fear for their safety, Israel will be able to confiscate the land under the pretext that it is abandoned land. Uprooting the trees is also a tool for uprooting the people by destroying their source of income which could force them to leave their homeland which is the main aim of Zionism.

Besides depriving the Palestinians of a source of income, destroying olive trees has an environmental impact as well as a psychological effect. The Palestinian farmer Adnan Salim said: “The olive tree is fundamental to a Palestinian’s life, he was raised to maintain it. When a Zionist settler from another country comes and cuts it off, it destroys us psychologically.”

While publishing is important, the UN needs to do more to protect the Palestinians from repeated Israeli attacks. It is equally not good enough from the Palestinian Authority and other Palestinian factions to call for establishing local committees to protect Palestinian villages as it is their responsibility to do so. Normalizing relations with Israel and telling the Palestinians to shut up by Arab dictators and supporting Israel by some western politicians especially Trump will only prolong the suffering and encourage Israel to continue with human rights violations.