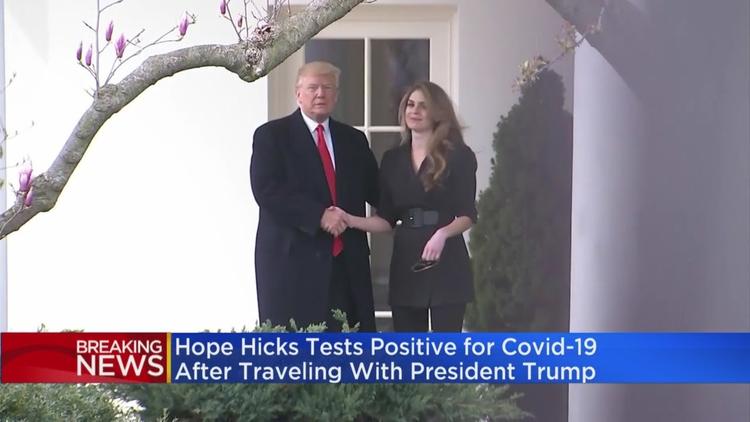 Ann Arbor (Informed Comment) – Donald Trump and first lady Melania have tested positive for the coronavirus and have gone into quarantine, the president said by Tweet on Thursday evening.

Even before the positive test, Trump and his wife had initiated a “quarantine process” after counselor to the president Hope Hicks, 31, fell ill with the novel coronavirus. Ms. Hicks had been traveling with the Trumps and vice president Mike Pence, and photographs indicate that the Trump circle has not been wearing masks or practicing social distancing.

Hicks was with Trump on Air Force One on Wednesday to attend a rally in Minnesota. Trump’s rallies have been controversial because the audience facing him often does not wear masks or keep six feet between the attendees.

Embed from Getty Images
An attendee holds a sign reading “This is a peachful protest” as U.S. President Donald Trump, not pictured, speaks during a ‘Make America Great Again’ rally in Duluth, Minnesota, U.S., on Wednesday, Sept. 30, 2020. Trump signed an executive order aimed at expanding domestic production of rare-earth minerals vital to most manufacturing sectors and reducing dependence on China. Photographer: Ben Brewer/Bloomberg via Getty Images.

In Tuesday’s debate, Trump boasted with regard to Joe Biden,”I don’t wear masks like him. Every time you see him, he’s got a mask.” Trump argued that his large rallies are not dangerous because they are held outdoors.

But the top Tulsa health official is convinced that a Trump rally this summer in that city caused a surge in infections. Former Republican presidential candidate Herman Cain attended it, without a mask, and later was diagnosed with Covid-19, dying of it. It is not clear where exactly Cain contracted the disease, but it could easily have been at the rally.

Being outdoors is safer than being indoors, but only if social distancing rules are observed. The novel coronavirus is a respiratory disease, and if someone infected with it breathes on your face, or sneezes in your face, or coughs in your face, you are not protected by virtue of that happening outside. Because many carriers don’t show symptoms, you can never know if the person breathing in your face is infecting you.

Masks have been proven to cut transmission of the deadly disease by 80%, and physicians estimate that if all Americans wore masks in public, we could save over 100,000 lives through the rest of this year. The head of the Centers for Disease Control, Dr. Robert Redfield, has pointed out that widespread mask-wearing is more effective than a vaccine is likely to be. Countries with very low case and death counts from the novel coronavirus are typically those, like South Korea, Hong Kong and Taiwan, where mask-wearing is nearly universal. In Hong Kong, a city nearly the size of New York, 98% wear masks, and they have had 105 deaths. New York city has had nearly 24,000 deaths. Only an estimated 48% of Americans are willing to wear a mask when they go out.

I don’t wish COVID-19 on any human being. We still have no idea what the long term effect so the disease are. I hope everyone who fell ill with it and survived has a complete recovery.

There is increasing evidence, however, that even people who recover from the disease and who had mild cases may suffer effects later on in life.

The Mayo Clinic warns that there may be long-term adverse health consequences of the coronavirus, especially on heart, brain and lung health, though the liver, kidneys and other organs can be affected:

“Heart. Imaging tests taken months after recovery from COVID-19 have shown lasting damage to the heart muscle, even in people who experienced only mild COVID-19 symptoms. This may increase the risk of heart failure or other heart complications in the future.

Lungs. The type of pneumonia often associated with COVID-19 can cause long-standing damage to the tiny air sacs (alveoli) in the lungs. The resulting scar tissue can lead to long-term breathing problems.

Brain. Even in young people, COVID-19 can cause strokes, seizures and Guillain-Barre syndrome — a condition that causes temporary paralysis. COVID-19 may also increase the risk of developing Parkinson’s disease and Alzheimer’s disease.

COVID-19 can make blood cells more likely to clump up and form clots. While large clots can cause heart attacks and strokes, much of the heart damage caused by COVID-19 is believed to stem from very small clots that block tiny blood vessels (capillaries) in the heart muscle.

These are the reasons for which universal mask-wearing and social distancing are crucial, and should not be disregarded even by the young and healthy. Where they contract the disease, they risk long-term damage to heart health and other complications. Moreover, they may inadvertently kill their grandparents.